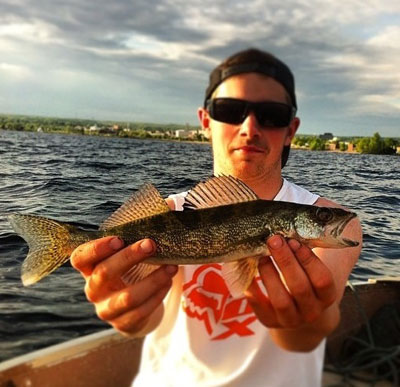 Christopher Stanley, 17 of North Bay, Ontario Canada, was boating southeast of town with another teenage male on Lake Nosbonsing on Sunday June 15, 2014 about 8:45am.

Details of exactly what happened are still sketchy, but somehow he and his friend ended up in the water with their 16 foot boat circling them in the Circle of Death.

Rescuers were able to save his friend, but Chris slipped below the surface and his body was recovered that evening. A postmortem examination was scheduled for Monday June 16th.

Chris’ friend was taken by ambulance to a medical facility so his injuries could be assessed.

The local underwater search team, OPP Underwater Search and Recovery, spend Sunday searching for his body. Christopher’s body was found about 12 hours after the accident.

Our coverage of this accident will provide more details on the accident, on Christopher Stanley’s life, then propose a question.

Christopher Stanley was said to have loved the outdoors. Some joked that his wardrobe was mostly camo and plaid.

He attended Widdifield Secondary School as a senior. His fellow students are grieving, while still preparing for exams and graduation.

The school board issued a statement:

“Today the Near North District School Board family is saddened by the tragic boating accident involving two of our Grade 12 students that has unfortunately claimed the life of one of them who attended Widdifield Secondary.

On behalf of the entire board, I would like to extend our sympathies and thoughts to both families, their classmates and staff at both schools as today is not a day that matters what school you go too.”

The Widdefield School Council posted the following message on their website:

“Our hearts and souls go out to the Stanley and Watson families right now. Their loss is also our loss. Chris’ smile will forever be remembered in the halls of Widdifield.

We will all get through this together. RIP Chris.”

Chris wore #22 on his high school football team, the Wildcats. After the accident, his jersey hung in the entrance to his home.

A life jacket petition to the Canadian Federal Government in his memory has been launched on Change.org calling for “Life jackets should be made mandatory for all boaters and other personal water crafts of all ages at all times.”

The Nugget reports Chris and his mother had been discussing him getting a tattoo. His mother had objected. After the accident, his mom, dad, and sister are going to get the tattoo he had designed for his left arm. The tattoo has to do with Ford Mustangs and horses, two of his favorite things.

His family will receive friends at Hillside Funeral Services on Wednesday June 18 from 11am to 4:30pm. A celibration of his life will be held at 4:30pm.
The family requested donations in his memory be made to The Ontario Heart and Stroke Foundation or the Canadian Cancer Society.

Chris Stanley’s relatives and friends will meet at his family’s home on Friday June 20th beginning at 3pm to celebrate his birthday.

We extend our condolences to Christopher Stanley’s family and friends. He sounds like a wonderful young man.

Our Question: Should This and Similar Accidents be Considered Indirect Boat Propeller Accidents

Please Note – a family member reports HE WAS NOT STRUCK BY THE PROPELLER.

While the accident is still under investigation, it appears that some event(s) placed Chris Stanley and his friend in the water and the unmanned boat continued to circle the two young men. Early calls for help noted that two people were being circled by the unmanned boat. Christopher’s friend was rescued by others nearby, but Christopher Stanley went under and did not resurface.

We propose that the hazard of the rotating propeller on the circling unmanned boat MAY HAVE BEEN instrumental in Chris Stanley’s death, EVEN IF HE WAS NOT STRUCK BY THE BOAT, MOTOR, OR PROPELLER.

That could be the situation IF:

We recognize that if Chris Stanley was not struck by the propeller, there is no way Canadian authorities are going to call it a propeller accident, however was this an “Indirect Boat Propeller Accident”? What do you think?

A family member is aggravated at us, see comments below, and again we explain, WE ARE NOT SAYING CHRIS STANLEY WAS STRUCK BY THE BOAT OR BY THE PROPELLER, we are suggesting that if the boat had not been circling, he might have been able to swim back to the boat OR rescuers might have reached him earlier. In either instance, he might have lived. Thus we are suggesting his death MIGHT be INDIRECTLY attributable to the propeller.

We are trying to help prevent other families from suffering the same loss by raising the awareness of the dangers of circling unmanned boats, and encourage the boating industry and boating safety groups to employ the devices, programs, and Public Service Announcements necessary.

A fitting memorial to Chris Stanley would be real action on this issue that prevents similar future deaths.