This post is the second of a three part series on the new American Boat & Yacht Council consolidated warnings for recreational boats.

We announced the new labels in May 2015 in part 1, our post titled, ABYC Releases Consolidated Boat Warning Labels. 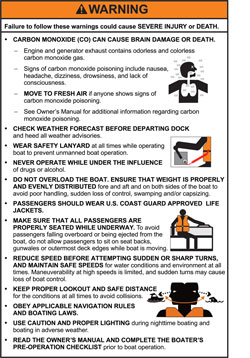 Note – much of our story of the development of ABYC’s consolidated warnings rides upon work by others. Two sets of consultants plus Professional Boat Builder magazine each have published a history of a segment of their development. USCG’s National Boating Safety Advisory Council meeting minutes also provide a portion of the history. This posts identifies and pulls those previous documents together to provide a broader overview of the project.

In the mid to late 1990s, a similar project was undertaken to combine / consolidate warnings on personal watercraft (PWCs). Consultants were hired to identify hazards and develop two warning labels (one for collision avoidance and one for general operational hazards). In general the purpose was to develop consolidated labels for the PWC industry vs having separate warnings for each hazard from each manufacturer. Coast Guard accident Boating Accident Report Database (BARD) accident reports were analyzed and manufacturers were consulted to make sure warnings covered the appropriate hazards and issues.

Applied Safety & Ergonomics of Ann Arbor Michigan was a major participant in the PWC warning project. Their work is well summarized in a two part technical paper:

Final designs were presented to the Coast Guard in July 1999 for review. No changes were made.

Now we flash forward to the carbon monoxide issues in houseboats raised by Double Angels. In 2000, two young boys were killed by carbon monoxide poisoning behind a houseboat on Lake Powell. Their parents created a victim advocacy organization (Double Angels) calling attention to the issue that same year. Double Angels was able to bring the issue to the forefront and determine there large numbers of similar incidents that previously went unnoticed (were attributed as drownings, not carbon monoxide poisoning). The Coast Guard, the Environmental Protection Agency (EPA) and many other players became involved. In 2005 the State of California hired Design Research Engineering (DRE). a firm often used by the industry in defense of lawsuits, to develop a carbon monoxide warning for boats. Professional Boating Building magazine says it took DRE 2.5 years to develop the label. Our understanding is that warning is the origins of ABYC’s Carbon Monoxide warning label currently sold by National Marine Manufacturers Association (NMMA) and required on NMMA certified boats.

Boating Industry Risk Management Council (BIRMC) reported to National Boating Safety Advisory Council (NBSAC 85) in April 2010 that Design Research Engineering had reported on their development of the carbon monoxide warning at the last BIRMC meeting and that label is now (2010) in use by NMMA. (see page 16 of NBSAC 85 minutes). BIRMC then announced their next focus would be on boat warnings. BIRMC has launched a project to combine boat warnings similar to the PWC combined warning and Design Research Engineering (DRE) has been contracted to work on the project.

The history from here on is well told in:

Near the end of the Professional Boatbuilder article above, speaking of the new consolidated warnings released in 2015, John Adey of ABYC “cautions any builder: “Before you decide to change any one of these, you better be sure you have a good reason for it.” Because the warning package is the outcome of an extensive research and design effort conforming to the ANSI Z535 labeling standard, the suggested labels will be very defensible for the builder in the event of an accident.”

Robert Taylor, well known expert witness for the industry in boat propeller and PWC cases, co-authored the Design Research Engineering paper detailing the process used to the develop the consolidated warnings for boats:

American Boat and Yacht Council Warning Label Grant Report. Prepared by Design Research Engineering. Robert K. Taylor and Wendy C. Sanders. Prepared for ABYC. 23 December 2014. The report is available for free from ABYC, but you have to go through some steps to download it.