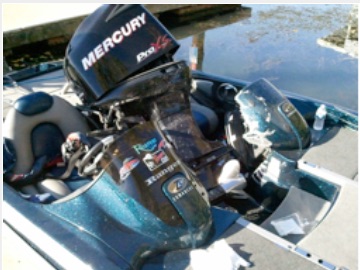 Back on 29 September 2011, Mike Moreno, a professional bass angler, and his stepson, Jared Mitchell were prefishing the California Bass Federation State Championship tournament

The were rolling along in a Ranger bass boat powered by a 250 horsepower Mercury outboard motor.

About 8 am they struck a dredge pipe on the San Joaquin River Delta. The Mercury outboard motor broke off, flipped up into the boat, and landed between the consoles with the engine still running. Both men sustained major injuries. Mike Moreno was pinned down by the motor. Jared was cut by the propeller. This quick account of the accident was gleaned from Things can happen beyond your control. Bass Angler magazine. 18 October 2011.

The Moreno’s filed a case 12 October 2012 in the Superior Court of the State of California for the County of Sacramento, Case #34-2012-00133702 focusing on the dredging operation being insufficiently marked / lack of warnings. That case also named the U.S. Coast Guard and the U.S. Army Corps of Engineers as defendants. With the federal agencies named as defendants, on 8 April 2013 the case was moved to Federal Court:

Claims against Ross Island Sand & Gravel were made for bodily injuries, past and future medical expenses, lost earnings and/or lost earning capacity, and loss of consortium.

Contra Costa County initially responded to the accident and conducted the initial investigation. It was later found the accident occurred in Sacramento County.

Per the Sacramento County accident report, as Moreno approached the pipe area the skies were clear and the waters were calm. Moreno was coming from the south at top speed. The dredge operator displayed an amber strobe light and sounded a horn. The hull of Moreno’s boat stuck the pipe, the lower unit stuck the pipe, the engine flipped counter clockwise (viewed from port side), detached from the transom, landed in the passenger compartment, the propeller seriously injured Mitchell’s right hand. Both men sustained serious injuries.

A safety boat called for help and crane was used to raise the engine off Moreno and Mitchell. They were transported to John Muir Hospital.

Moreno said he was operating in the river channel. A GPS unit on his vessel showed he was about equal distance from the channel and the north shore line.

Deputy David Guthrie, who joined the Sacramento Sheriff’s Office in 1998 and spend 9 years with their Marine Enforcement Detail was hired by Ross Island Sand & Gravel as a non-retained expert to investigate the accident. He was also the officer who filed the accident report for the County of Sacramento.

Per the accident report, Deputy Guthrie found Ross Island Sand & Gravel in compliance with the dredging application with the U.S. Coast Guard and with the Inland Rules of Navigation with the exception they failed to notify the Sheriff’s Department of Sacramento County and had not been granted 5 mph speed zones for that area.

An Expert for the Moreno’s, Hector V. Pazos of Ocean-Oil Expert Witness, Inc. described the dredging operation. His report states they had about 6,000 feet of pipe from the dredge to the north shore laying in a serpentine pattern (we call it snaked). The High Density Polyethylene (HDPE) pipe was 20 inches in diameter with 1.5 inch thick walls. At time of collision, he estimates the pipe was 6 inches to 12 inches below the surface of the river. 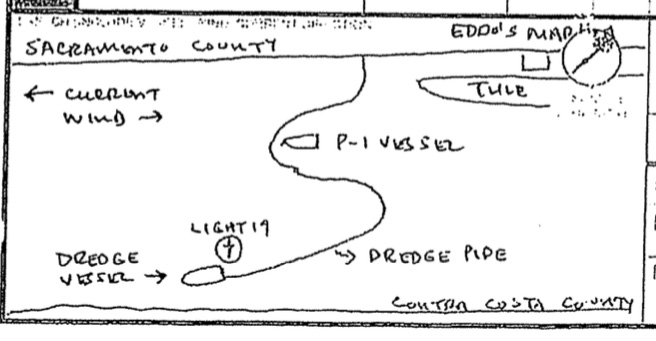 The sketch above comes directly from the official Sacramento County accident report. You can see the pipe crosses almost all of the 3500 plus foot wide river. Also note the pipe did not run straight across the river as shown in the diagram. The pipe was about 6,000 feet long and snaked across the river in a series of “S”‘s

Pazos notes the pipe had damage from previously been struck by other boats and had been dragged onshore several times.

Where the accident occurred the river is about 3858 feet wide and the dredge was about 3800 feet from the north shoreline.

Pazos reports Moreno self reported his speed as 45-50 mph.

Pazos says there were two chase boats monitoring boat traffic east and west of the dredge pipe. (sounds like one on each side of the pipe).

The pipeline is normally submerged but it is raised 3 to 4 times a day to move it and reset the pipeline anchors.

Pazos concludes the six 5mph buoys (referred to as sign barges) were too far from the floating dredge pipeline and were totally useless when the pipeline was floating.

Pazos goes on to find Ross Island Sand & Gravel negligent for not exercising proper procedures to prevent boats from colliding with the floating pipe, and for not properly marking the pipeline.

An eyewitness following in a boat behind the Moreno boat reported there were no visible or audible signs or warnings of the submerged pipeline.

Quick Summary of the Case

That about sums it up. The dredging operation says the pipe was properly marked and they properly tried to warn off the bass boat. And that the bass boat was traveling at excessive speed without a lookout.

The boat boat folks claim they were not traveling at excessive speed, they had a lookout (Mr. Moreno), the pipe was not properly marked and the dredging operation did not use proper procedures to prevent boats from striking the pipe.

As is normal, both sides tried block certain pieces of information not favorable to their position from being admitted to the case. For example, the Moreno’s did not want the County accident reports allowed in, while Ross Island Sand & Gravel tried to prevent information regarding other boats striking the pipe from being admitted.

The Moreno’s did have some ground to stand on toward blocking the county accident reports. Moreno claims the first deputies arrived on scene three hours after the accident, the pipe had been moved, and they were influenced by accounts provided by the dredging crew. (PACER 128 pg3).

Also as normal, both sides objected to the use of certain expert witnesses by the other side.

The Jury began deliberations the afternoon of the fifth day of the trial, 2 November 2015.

A unanimous verdict was reached the afternoon of the sixth day of the trial, 3 November 2015.

1. Plaintiff’s proved their claim of negligence against Ross Island.

2. Damages each Plaintiff suffered were identified as:

4. Michael Moreno’s negligence was a contributory factor in causing the accident.

Mareno’s are also requesting court costs of approximately $24,000, the bulk of which is for copies of transcripts. Ross Island objects to the costs and the court will discuss the court expenses billing issue 26 February 2016.

On 24 November 2015 Jared Mitchell filed a legal brief explaining why Maritime law entitled him to the full award based on the defendant not proposing a jury verdict form with separate lines for economic and non-economic damages. Ross Island wants to assume all damages are non-economic and thus are proportional (they only want to owe 10 percent of Mitchell’s damages).

A one page court document filed 28 December 2015 says the “That judgement is hereby entered in accordance with the jury verdict rendered 11/3/2015” but it does not have dollar amounts on it.

The Honorable Kimberly J. Mueller was the Judge.