Hawaii prop guard bill amended to be effective in 2088 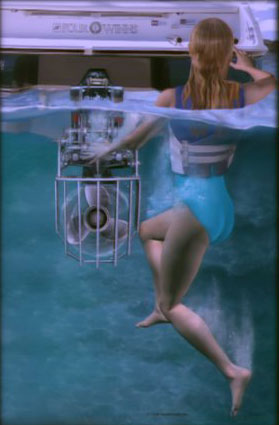 We previously covered Hawaii House Bill 2024 requiring mandatory use of propeller guards on all recreational boats within 500 meters of shore.

The bill was introduced and passed its first reading on 25 January 2016.

On 27 January 2016 the bill was referred to the House Committee on Ocean, Marine Resources, & Hawaiian Affairs (OMH)

OMH recommended the bill be passed with amendments on 17 February 2016, the same date testimony on the bill was heard before OMH in a Public Hearing.

Public testimony could be submitted online. Submissions were posted as a group on the Hawaii State Legislature page for the bill. The first page is the testimony of Suzanne D. Case, Chairperson of the State of Hawaii Department of Land and Natural Resources.

“While propeller guards may decrease the possibility of critical or fatal injuries in some instances, they can also interfere with the operation of the vessel that can hinder navigation, for instance, debris such as plastic bags can become entangled with the prop guard and cause cavitation. Propeller guards are also not manufactured for all vessels as they are typically affixed to outboard engines but may be impractical to install on sailboats and certain straight shaft vessels.

She goes on to say her Department thinks public outreach, training, and education would be more effective. She notes some of those programs that are already underway including mandatory vessel operator boater safety training and Boating Safety Week.

Prior to 17 February, the proposed bill HB2024 was to take effect upon its passing. It would obviously take some time for the industry to respond and prepare to meet those requirements. We are used to seeing the Coast Guard use dates like three years after passing, then the industry will try to move them back further.

However, in this instance the bill was amended as House Bill 2024 HD1 with an effective date of 24 December 2088.

OMH returned the bill to the House with with recommendation that it be sent to the Committee on Judiciary. OMH’s brief recommendation included the following statement:

Your Committee has amended this measure by changing its effective date to December 24, 2088, to facilitate further discussion.

While we definitely oppose the bill as it was written (guards mandatory on all recreational boats in Hawaii near shore), we do feel that open discussion and consideration of the bill could have been a great exercise leading to the identification of several devices and approaches detailed on our previous post. Hawaii could craft programs utilizing those devices and approaches, and others to help make their citizens safer on the water.

Instead Hawaii’s House Committee on Ocean, Marine Resources, & Hawaiian Affairs (OMH) virtually killed the bill by making it effective in 2088.

OMH says they pushed the date way out there “to facilitate further discussion.”

Legislatures frequently face challenges in which they do not have all the facts to make the best decision at this time. There are many legislative procedures that allow them to handle matters of that nature. Such as referring it to a committee for public hearings around the state, bringing in experts to speak on the topic (I am not talking about us), investigating the topic themselves, collecting data, reviewing the approaches of others, formation of study groups, consultation with U.S. Coast Guard, etc..

Here in Oklahoma the Legislature continues to stall on addressing oil well waste water injection issues surrounding earthquakes while the walls of our homes continue to crack and crumble. But the Oklahoma Legislature knows that if they were to currently pass a bill banning injection beginning in late 2088 the angry citizens of Oklahoma might well hang them on the steps of the State Capital the that same day.

While we oppose mandatory use of propeller guards on all recreational boats in Hawaii near shore, we encourage open discussion of this issue leading to positive changes, not effectively killing the bill.