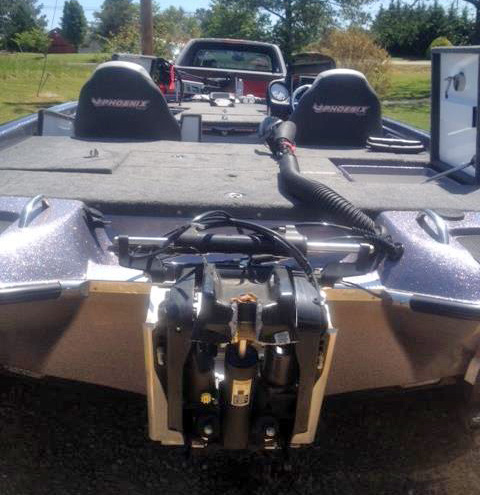 We previously posted information on several existing and proposed solutions, including The Leash, a vectran tether targeting bass boat applications.

Submerged objects have a wide range of characteristics ranging from almost pure water with just a few weeds or small pieces of debris all the way up to stumps, pilings, dredge pipes, railroad ties, and concrete piers. When outboard motors from various manufacturers of various sizes and speeds strike this wide range of objects, the outboard motor log strike system behaves in a number of different ways (modes).

The Outboard Motor Log Strike Modes Chart for a bass boat below illustrates the range of behaviors (modes) encountered. 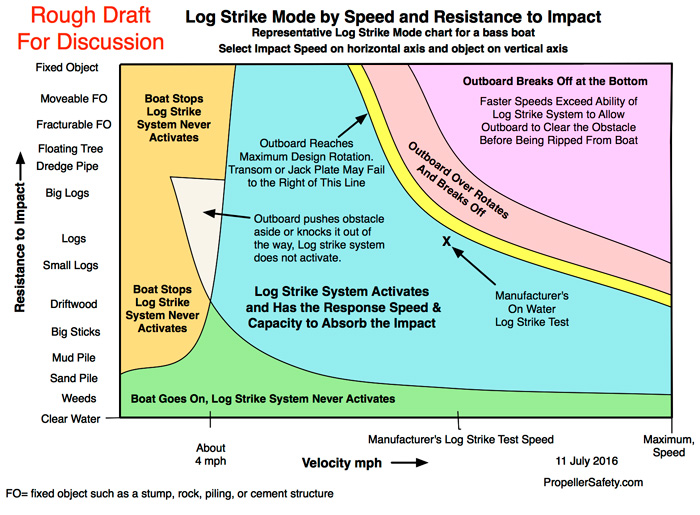 Click anywhere on the chart above to view a much larger version of the same chart on a large monitor.

NOTE – this chart is obviously NOT PERFECT, it has been posted to stimulate discussion, encourage development of additional solutions, and the further refining of existing solutions. The vertical list of struck objects on the left axis may not be in the correct order and they are certainly not correctly spaced along the vertical axis. Similarly the curves drawn serving as boundaries for the various modes are obviously not exactly where they should be for any specific vessel or outboard motor. The chart depicts generalities.

USING THE CHART – select a bass boat speed and a submerged object to be struck at that speed. Where those two lines intersect is a point on the chart. See what mode (color) that point is in. The chart generally predicts what will happen if you strike that type of submerged object at that speed in a bass boat. Yes we know the horizontal axis mostly displays relative speeds, not specific speeds.

PURPOSE OF THE CHART – the impact of existing and potential solutions to the problem can be envisioned on the chart (how the boundaries of the various mode areas would change with application of certain design changes or mediations). This will be further discussed later in this post.

Comments Invited – We welcome your comments and suggestions about the chart and the modes it illustrates. Please help us improve the chart.

General Discussion of the Modes

Each manufacturer had/has its own procedure in terms of boat speeds and log specifications, but generally, they ran over floating logs of a certain diameter and length at a certain speed to prove the durability of their outboards.

An “X” is on the chart about halfway vertically up the chart to the left of the yellow band. An arrow indicates it is a Manufacturer’s On Water Log Strike Test. A manufacturer chooses to hit a certain type (like pine), diameter, and length log at a certain speed.

If you look at that test point, it is in the blue area, the area in which the log strike system is activated, absorbs the energy of the upward swinging outboard motor, and the outboard returns to its previous trim position.

Now if you imagine hitting the same log (same length and same diameter log of same type of lumber) at slower speeds, you can just look along the chart directly to the left of the “X”. The log strike system continues to function perfectly as slower speeds down till where you eventually are in the gray area (boat has enough energy to push submerged object out of the way) or all the way over to the mustard colored area where the boat just stops and the prop continues to turn).

If you strike an identical log even faster at near maximum speed, the outboard motor breaks off at the bottom of its upward swing (is unable to clear the object before it is ripped off the boat or breaks off before the top of its swing)

The chart below shows what happens in the discussion above AND if you stayed at the same speed used during the log strike test, but struck more solid objects than the test log specified in the test procedure. 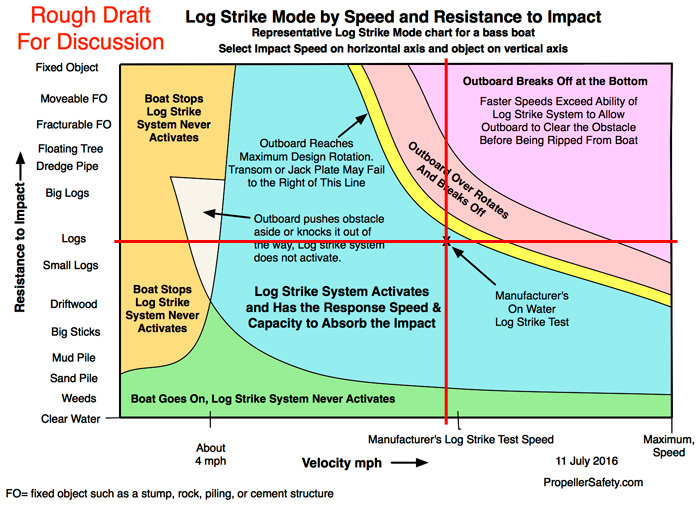 As to striking more solid objects, you can see that striking an object just a little more solid or heavier object than the test log (moving a little ways vertically up the red line from the “X” into the yellow zone) could bring about jack plate or transom failure.

Potential Design Changes and the Chart

We find a printed off copy of the chart to be extremely helpful in thinking about or describing the difference some change (change in speed, change in object struck, change in mitigation methods, change in outboard) would have on a collision with a submerged object.

A few design changes or mitigations will be discussed here with respect to how the chart would change (change in performance of the system vs. velocity and object struck).

Taken to its full extent, components (including the transom and jack plate) can be made strong enough to prevent the outboard from breaking off at all. In this instance, the yellow band would extend all the way to the top right corner. The light pink and light violet modes (broke off at top, and broke off at bottom) would not exist. However, part/component weight and size make it more practical to consider the entire system and combine increasing component strength with other mitigations.

2. Increase tilt cylinder internal relief valve pressure setting. If the relief valves can open fast enough, this will push the left border of the yellow band up and to the right. Outboard motors will have to be going faster when they strike submerged objects to reach maximum rotation (maximum tilt).

Other changes with Approach #2 – The blue area now extends further over and up. The log strike system can dissipate more energy. But, it must be strong enough to not break off, and the adjoining components including the jack plate and transom must be strong enough as well. When striking fixed objects, the outboard may break off at slower speeds, the left border of the violet area may move down and to the left because it is harder for the outboard to clear a fixed object at speed.

3. Increased capacity log strike tilt cylinder – If the hydraulic tilt cylinder has a larger diameter, the same stroke, a larger diameter cylinder rod, and internal relief valves that open at the same pressure as before, the tilt cylinder will absorb more energy (more force over the same distance). Meaning some strikes that previously caused the outboard to reach maximum upward designed swing (maximum tilt) will not longer reach maximum tilt, and will not break off. This means the yellow band remains somewhat similar in width, but is pushed up and to the right. Also see “Other changes with Approach #2” above as they apply to this approach as well.

3. Two stage tilt cylinder – tilt cylinders designed to allow the outboard to clear the obstacle with little resistance to its upward swing, then quickly cushion the remainder of the outboard’s upward swing. Two stage tilt cylinders primarily move the light violet area upward and to the right. Depending on the response times of the internal relief valves and their overshoot characteristics, they may also move the left border of the yellow band up and to the right. Some two stage cylinder designs only try to cushion the tilt cylinder near the very top of its stroke (less shock when hits upper limit of stroke.)

4. Limiting maximum boat speed (like PWCs do) moves the vertical maximum speed line to the left.

5. Use of tethers – tethers have no influence on the modes or the chart. They only prevent the outboard from flipping into the boat if it breaks off.

6. Break away lower unit – the lower part of the outboard beneath the power head (engine) is designed to break away in severe collisions. This approach has no influence on the chart. It only prevents the outboard from entering the boat if it breaks off.

7. Additional internal relief valves in the tilt cylinder – depending on sizing and other characteristics of the relief valves, adding more reliefs could reduce maximum overshoot (peak pressure) in the tilt cylinder when striking fixed objects. This would move the left edge of the violet area up and to the right. Similarly, it might also move the left edge of the yellow area and the left edge of the pink area up and to the right. (some outboards currently over rotating may be doing so because they received additional energy in the collision because the log strike system was slower in clearing the submerged object because of relief valve overshoot.)

8. Crush tube – adding a crush tube (piece of tubing designed to be crushed to absorb energy) internally in the tilt cylinder or externally, near the end of stroke of the tilt cylinder could greatly reduce shock loads resulting from the upwardly swinging outboard reaching maximum tilt. Adding a cushion to the hydraulic cylinder could have a similar result. Either approach would require other components to be strong enough to take the loads. However, those loads would be lower than they now are because the tube or cylinder cushion would be dissipating the energy over a longer period of time.

9. Smaller horsepower outboard – a smaller outboard would speed limit the bass boat (see item #4) plus lower the mass of the rotating outboard, placing less load on the jack plate and transom during impacts at the same speeds, plus be easier to restrain (tether). The maximum speed (right side vertical axis of the chart) would move to the left. The chart would change (modes) based on the physical characteristics of this new lower horsepower outboard and its log strike system.

A couple previous posts especially provide ideas when thinking about the “Modes” chart above.

The chart may be subject to multiple revisions in the future, but even in its current form, we think it can be a very useful tool in discussions of the problem, of the scenarios, of log strike testing, of specific accidents, of specific mitigations, and of the need for fail-safe testing.

As mentioned earlier, we especially welcome your comments on this chart and any ideas you may have for improving it.