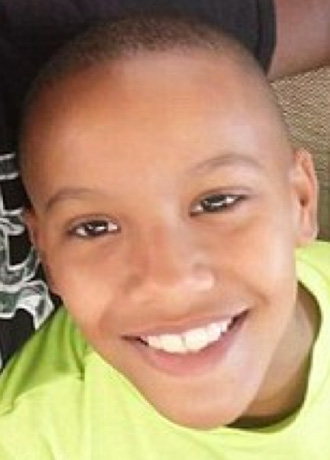 Kaden Frederick, 9 of Howell New Jersey, was among 17 people on a rental pontoon boat in Sinepuxent Bay near Ocean City Maryland on Wednesday afternoon August 17th. Four people, including Kaden, were bow riding / bowriding with their legs dangling off the front of the pontoon boat. About 2:50 pm Kaden Frederick and an 11 year old fell overboard. The operator could not stop the boat in time. Both children were struck by the rental pontoon boat propeller. Kaden was struck several times by the propeller. His father is Ulyssee Frederick Jr. The driver of the boat has not yet been identified.

A group of paramedics and state troopers were nearby on a pontoon boat. Six of them boarded the rented pontoon boat (NJ.com says those included two nurses, on emergency medical technician, and two off-duty troopers) to help out after Kaden’s relatives pulled him from the water. Kaden went into cardiac arrest and died.

The pontoon boat had been rented from Under the Bridge Water Sports in Ocean City Maryland.

NJ.com says the operator took a brief safety course at the rental facility before the group of 17 family members and friends departed the dock. Per NJ.com, a spokeswoman for Maryland Natural Resources Police said, “It is not legal for a person to sit with his or feet draped over the edge of a pontoon in Maryland” and that alcohol is not expected to be a factor in this accident. 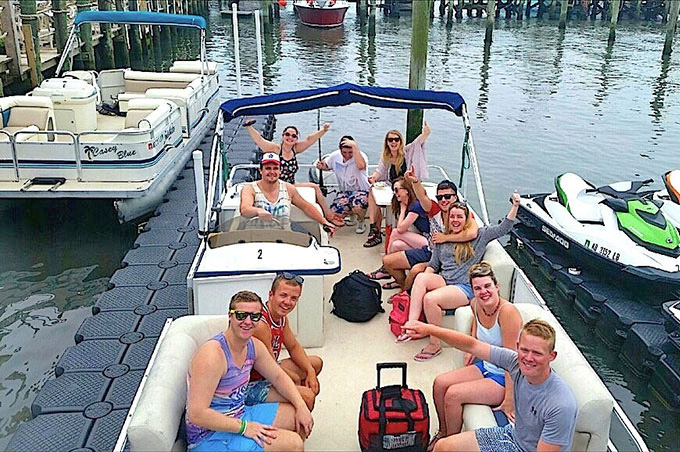 Under the Bridge rental pontoon boats

The maker of the pontoon boat and outboard motor have not been publicly identified. From the rental facility website, there is a strong probability the outboard is a 90 horsepower Honda outboard.

Like many accidents, early on there is conflicting information. For example, early reports say the other child (11 year old) was taken to a local hospital with propeller lacerations. However, later reports say only one child was involved.

WDRE posted a great video with some footage of the area and the tour boat that came to the rescue.

We would especially like to commend the Daily Mail for covering of this accident. Its a shame this accident gets broad coverage in the UK, but local coverage here. Broader coverage here could help prevent future pontoon boat bow riding accidents.

Early reports on this accident quoted authorities saying it is illegal to bow ride in Maryland, while a later quote from officials says it is not.

We looked into Maryland bow riding laws. Their state boating regulations handbooks says, the law prohibits negligent or grossly negligent operation of a vessel that endangers
lives and/ or property. Then they list some examples, including bow riding. After seeing some discussions online of the actual state laws it APPEARS bow riding in not specifically mentioned in State of Maryland boating laws. However, officers can address it if they feel the vehicle is being operated negligent manner.

it looks to us like any violation tied to bow riding comes under the Maryland statute below:

(1) Operate a vessel recklessly or in a manner that may endanger another or the property of another on a bay, creek, lake, river, or stream in the State; or

There does not appear to be a clear cut law in Maryland state code addressing bow riding. If anybody finds one, please drop us a note.

Please note- we are definitely not suggesting people should bow ride because it may not specifically be against Maryland law. We are only trying to clarify the status of Maryland law on the issue.

News media reports Maryland is discussing potential boating safety regulations in the wake of the Kaden Frederick accident. We encourage them to study things out and not make hasty decisions. They should find the information near the bottom of this page quite helpful.

We suggest they consider what other states have done that have taken action. We notice a nearby state, New Jersey, enacted a rental boating safety law in 2015 in the wake of the death of another young boy, Christopher D’Amico, by a rental pontoon boat propeller. That might be a good place to start (review what New Jersey did, how it is working out, and see if it fits your situation or not). We encourage other states to consider rental boat safety training requirements in their states as well.

Among the many ways to prevent or mitigate over the bow pontoon boat propeller accidents are:

As we said before, most of these accidents are preventable or can be mitigated. We direct anybody interested in actually addressing this issue to three of our previous reports: