A flurry of boat boat propeller accidents in Ocean City, Maryland has many talking about the recent cluster of accidents.

As we scanned the news this morning (24 August 2016) our eyes were drawn to a DelmarvaNow headline, “In Ocean City, Propeller Accidents Chop Up Vacations”. DelmarvaNow is part of the USAToday media network. DelmarvaNow is named for a large peninsula that includes most of Delaware and parts of Virginia and Maryland. 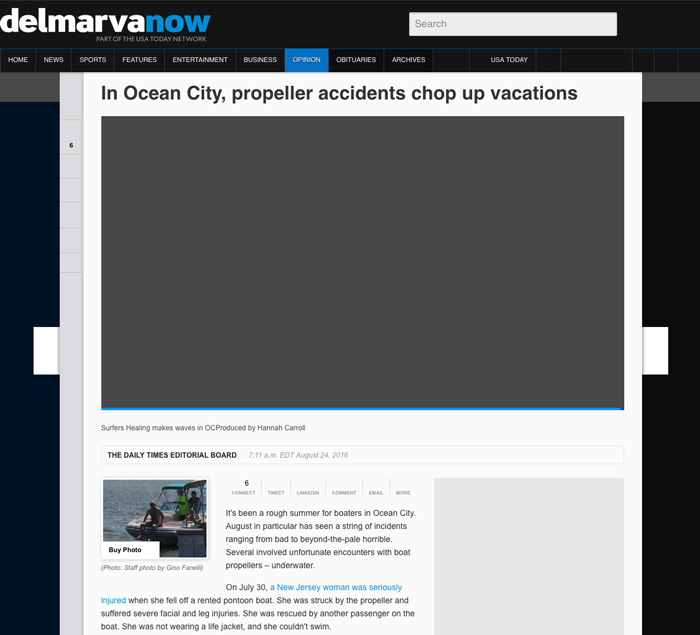 Boating communities, like Ocean City, have long been known for minimal coverage of boating accidents because such coverage can drive boaters and tourists away (AND ADVERTISERS with connections to those activities which is most of them in a resort community).

Our observations, some of which have been documented, are the U.S. media fails to cover many fatal boating accidents, only locally covers those they do, and uses much tamer (less shocking) headlines and photos than the rest of the world.

For example, the recent Kaden Frederick fatal pontoon boat propeller accident at Ocean City was covered by national media in the U.K. (like this article in the Daily Mail) but only locally in the U.S.

With those thoughts in mind, we were SHOCKED, to see the DelmarvaNow headline this morning. But about an hour later, the headline had been drastically altered to read, “Tragedy strikes OC vacations with boat propeller incidents”. 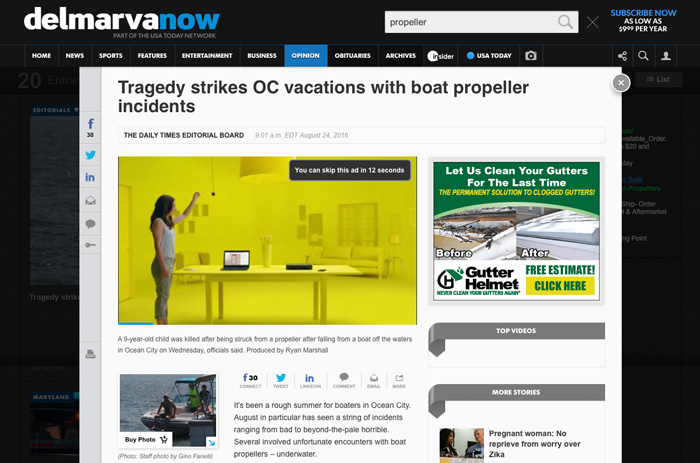 DelmarvaNow headline after the change

Wow, guess advertisers really didn’t like that first one. Just like the networks take sides in how they portray political news, they take sides in how the portray boating accidents. The problem is they all take the same side leaving nobody on the other side, except propeller safety advocates.

This would just be another story about media outlets screening content to keep advertisers happy, EXCEPT, these articles can save lives. We previously explained how those reading these articles become “vaccinated” with the knowledge of these risks and some will at least temporarily change their behaviors resulting in fewer local boating accidents similar to those covered in the press. Just remember the last time you read or saw a news report of a train-automobile collision at a train crossing in your community and how you very carefully looked both ways at all train crossings for several months afterwards.

The headline, photos, and content of boat accident articles has the same impact. When the articles are toned down or don’t even exist at all, the opportunity to influence behavior is lost.

We encourage DelmarvaNow and their advertisers and whoever else influenced the decision to tone down the headline to think about the lives of DelmarvaNow readers and not the bottom dollar for a minute. We all know more eyes would have been attracted to the original headline, resulting in more people being “injected” with the safety messages.

That said, we still commend DelmaraNow for the numerous articles they have devoted to covering the recent series of boat propeller accidents, and for allowing non-subscribers the ability to view them.

In case nobody believes us about the change, we captured an image of the URL after the headline was changed. They still left it in the same file folder. The new “toned down” headline is a file folder named “ocean-city-propeller-accidents”chop-up-vacations”.

The switched headline by Delmarva is just another example of what we have been talking about all along.

Again, we salute Delmarva for their existing coverage, but encourage them not to sell out next time they face some heat (or their editors think they will face some heat) from advertisers.

We welcome comments from Delmarva and others.

We wrote an article about U/S. media coverage of boating accidents back in 2013 and another one back in 2007 titled, Propeller Accidents: Another Inconvenient Truth.

An Australian researchers showed the importance of media coverage of existing accidents in preventing future similar accidents in “Road Trauma Perceptions and the Potential Influence of the Media”. Fleiter and Watson. International Journal of Injury Control and Safety Promotion. Available online 19 April 2012.