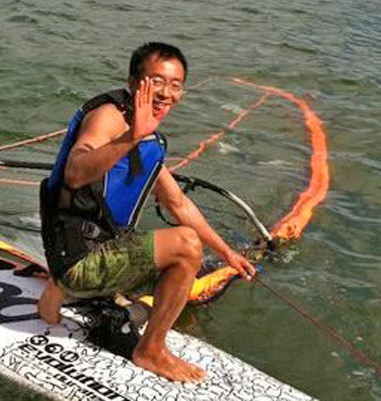 Yu Chen, 43, an accomplished wakesurfer (Sail Surfer) was teaching lessons on Lake Mendota in Wisconsin about 6 pm Wednesday 31 May 2017. The University of Wisconsin maintains a Lifesaving Station on the lake. Their boat was returning from a rescue to Governors Island when Yu Chen was struck between the UW LifeSaving Station and Edgewater Hotel.

The accident is under investigation. Among the agencies involved are Dane County Sheriff’s Office, University Police, and Wisconsin Department of Natural Resources (DNR).

Yu Chen was struck by a University of Wisconsin Lifesaving Station Boat. He was thought to have been wearing a GPS watch on his left arm which was severed from his body during the accident.

Three people were thought to have been onboard the rescue boat.

The people on the rescue boat tried to help Chen, but he was pronounced dead at the scene.

One media report included an official saying those on the boat did not see Chen till they struck his vessel, then they saw the sail.

Beyond teaching wakesurfing as a volunteer, Yu Chen created a wakesurf video in Chinese to encourage his Chinese friends to join in the activity.

Chen worked in Madison as a senior medical physicist after researching “news and better methods for radiation cancer treatment.” per the Wisconsin State Journal.

Per photos and text on the University of Wisconsin – Madison Environmental, Health & Safety page, they appear to have two lifesaving vessels, both larger twin inboard powered boats as seen in the photo below.

Chen’s family and friends are frustrated with delays in access to information concerning the accident and have retained an attorney. Jay Urban, representing Chen’s mother, Xiao Xu, will file a motion in Dane County Court this week (week of June 12th) asking the court to force Wisconsin University, Dane County Sheriff’s Office, and Wisconsin DNR to release evidence and information surrounding the accident.

Jay Urban said the windsurfer should have been visible from about a mile away. With three people on the vessel friends and family are wondering how this accident was able to happen. Media reports indicate Yu Chen was struck from behind (ran over from behind.

Per today’s Wisconsin State Journal (14 June 2017) Jay Urban is also requesting “permission to depose the three operators of the boat that struck Chen, as well as access to all documents, photos and videos related to the incident, including any videos from the Governor’s Mansion in Maple Bluff, which overlooks the lake. Attorneys are also seeking UW Lifesaving training and maintenance records.”

Jay Urban also seeks permission to examine the boat but pers Wisconsin State Journal “Sheriff Dave Mahoney confirmed to the State Journal has been released back to UW Lifesaving. Urban said the boat has been put back into service, and the DNR has refused to share data about it or permit it to be inspected.”

The University of Wisconsin released the following statement:

“We are deeply saddened by this loss of life. UW-Madison strives for safety on Lake Mendota at all times, through all units that operate on the water.

The windsurfing craft had been checked out from the Hoofer Sailing Club at Memorial Union. The windsurfer’s name has not been released pending notification of his family.

The boat was a rescue launch from the UW Lifesaving Station that was returning from responding to a rescue call. The station, part of the UW Division of Facilities Planning and Management, provides a lake safety and rescue operation that serves boaters and swimmers of the UW campus and greater Madison community. The rescue service keeps close ties with the Hoofer Sailing Club and Outdoor UW, both located at the Memorial Union.

Outdoor UW and the Hoofer Sailing Club are closed today. Operations are expected to resume tomorrow.

If you are a UW-Madison student in need of counseling or crisis support as a result of this incident or any other situation, call University Health Services at 608-265-5600, or drop in between the hours of 9 a.m. and 4 p.m., Monday through Friday. If you need immediate assistance after hours or on weekends, please call the UHS Crisis Line at 608-265-5600, option 9, or visit the uhs.wisc.edu/mental-health/.

If you are a faculty/staff member and would like to talk to someone about your reactions, call the Employee Assistance Office at 608-263-2987 or visit its website, www.eao.wisc.edu.”

A week after the accident, a vigil was held at Hoofers Sailing Club in honor of Chen.

14 June 2017 – while the investigation is ongoing, we find it unusual the boat was released back into service just a few days later. We have seen investigators perform an immediate investigation, then pull the propellers (for future examination), and impound the boat and store it in a secure location. Later, investigators and representatives download the Engine ECM (blackbox) data, download any GPS, fishfinder, or depthfinder, location and tracking data, thoroughly examine the vessel, and photograph everything very thoroughly. This provides the opportunity for the vessel to be later inspected by all parties with minimal changes since the accident, including operating the vessel in some instances.

14 June 2017 – We have seen many instances in which U.S. citizens were injured in third world marine tourism areas by propellers and their families fought for years trying to learn what happened. While it is still quite early in this investigation, we hope authorities will be as forthcoming as possible with this Asian family as quickly as possible.

14 June 2017 – One would suspect three people on a smaller open motor boat would have a higher probability of seeing Mr. Chen windsurfing that three people perhaps all inside the cabin of a larger vessel. We suspect UW uses cabin boats in part due to the many cold months they face each year. Those onboard would be closer to the water and likely more alert of their surroundings in a smaller outboard powered boat. However, smaller boats powered by outboard motors can expose those in the water behind rescue vessels to propeller strikes. In this instance, it sounds like Mr. Chen was ran over, so the drive would need protection from the front as well, such as a propeller guard designed for this application that did not create other hazards or challenges.

Additional approaches may include: