The Barhanovich case resulted from a boat accident off Biloxi Mississippi in which a large Suzuki outboard motor allegedly struck dredge pipe, broke off, flipped into the boat and killed Mark Barhanovich on Sunday morning 16 September 2012. 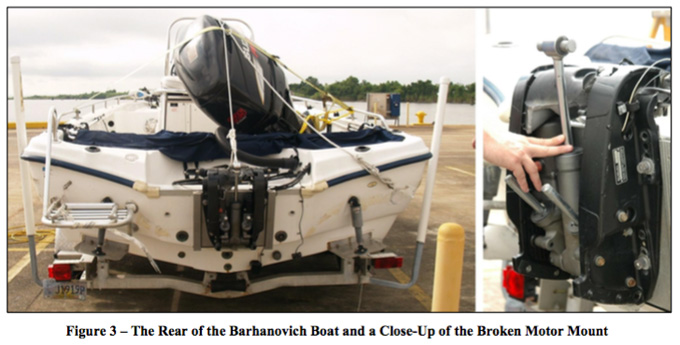 In our last update we updated the status of the Barhanovich case as of 5 November 2016. Previously, the dredge firm, Bean, settled with the Barhanovich family and began trying to recover some of those funds from Suzuki of Japan. An argument ensued concerning the admissibility of an initial and an updated expert report by Bean’s expert, Edward Fritsch of ATA. Suzuki was able to obtain a summary judgment in Federal District Court throwing out both reports, and with it much of Bean’s case. Bean appealed to U.S. Court of Appeals for the Fifth Circuit, and was allowed to proceed using Mr. Fritsch’s 2nd report. We covered that decision in our 5 November 2016 post.

Since then, the U.S. Coast Guard finally allowed full access to the vessel. A procedure was agreed upon to take material samples from the swivel bracket and analyze them for material content, strength, hardness, etc. The actual testing was done by an outside firm.

Samples were obtained. Both sides secured experts to analyze and report the data.

Suzuki of Japan claims Bean’s expert (Robert D. Bartlett of Bartlett Engineering) enlarged his claims and inserted new causes of failure in his 2nd report (analysis of the data), while he was supposed to only use the data to address issues he had previously raised (per Suzuki).

In late December 2017, Mr. Bartlett submitted a “Information Availability and Evaluation Sequence” flow chart (PACER 529-3) showing how all his new ideas flow from:

Bean does not accept his reasons

Bean says Mr. Bartlett should have known the material was brittle much earlier, for example he could have tested exemplar swivel brackets which the prosecution had. Mr. Bartlett says he could not make that assumption until the material in this bracket had been tested because Suzuki did not supply metallurgy specifications of the part in its final state (after it had gone thru all of Suzuki’s manufacturing processes including being cast, heat treat, etc.).

Suzuki says Bartlett described a new theory of failure different than that previously disclosed by Fritsch (striking the pipe at an angle, the swivel bracket not being supported on the sides after it rotates upward past a certain trim angle, leading to break like the one observed.) Suzuki specifically enumerates several items they say Bartlett discusses in his 2nd report related to this theory on pages 5 and 6 of PACER 527 filed 13 December 2017.

Over the past few months both sides have been arguing over the admissibility of Mr. Bartlett’s 2nd report and submitting briefs to the court. Per our understanding Suzuki filed the last document anybody was able to file relating to considering admissibility of Mr. Bartlett’s 2nd expert report on 23 March 2018. We suspect the court will make a ruling on this issue (admissibility of the 2nd Bartlett report, plus Suzuki has also called for striking Bartlett from the case along with his report) in a few weeks.

If the 2nd Bartlett report is rejected, at least Bean will still have the 2nd Fritsch report. Last time when they lost both Fritsch reports the case did not have a let to stand on. If Bean does lose the 2nd Bartlett report or even Mr. Bartlett as an expert, Bean could appeal like they did last time and try to recover them. Plus Mr. Fritsch has opined some on the metallurgical test results (PACER 526-4 pages 2 to 4).

The court will decide

We are far from being an expert on the courts, but last time the District Court ejected both Fritsch reports and was overturned on the second report by U.S. Court of Appeals for the 5th District. Judges and Courts do not like being overturned. We suspect that if the ruling looked like a tossup to the District Court, they would likely lean to Bean’s side this time to prevent being overruled again.

We will likely know the outcome of this portion of the case in the coming months, then the case will move on to the next step. The docket recently noted a settlement conference is coming up August 7, 2018.