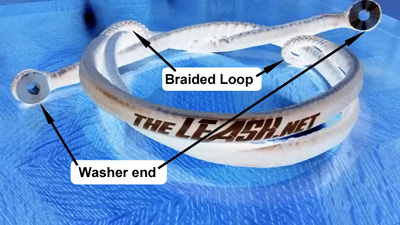 With all the chatter about The Leash we thought we would point out the first commercially available outboard tether for larger outboards was invented and sold by Mercury Marine.

This post is best viewed on a laptop or desktop computer.

This post in no way belittles the development of or the accomplishments of The Leash, it just points out the basics of the concept have been around a long time. It also points out that one outboard manufacturer not only condoned the use of tethers, they factory installed them on tens of thousands of motors.

Back on January 12, 1967, Brunswick Corporation filed two patent applications that were later issued as the patents listed below:

The first patent teaches how to combine the damping needed to stop an outboard motor swinging up after striking a submerged object, with the power lift system as seen on the “Tower of Power”, the tall large horsepower Mercury outboards.

The second patent focuses more on the mounting arrangement used to accomplish the first patent.

We do find it a bit odd these two relatively complex patents list two separate inventors vs. listing them as co-inventors on each patent. They even share the same drawings. The first patent focuses more on the tether and specifically includes it as a claim in the patent.

Mercury’s tether is a heavy nylon strap about 1.75 inches wide and about one to two feet long (they come in different lengths depending on the outboard model and model year).

The tethers have a loop on both ends allowing them to be slipped over a metal rod.

In operation on the tower of power outboards, one looped end of the tether slips onto a rod on the swivel bracket (note a tube allowing the tether to swivel more easily is slipped over the rod first, then the looped end of the tether is slipped over the tube). The strap then loops around a metal bar on the outboard mounting bracket structure that is firmly attached to the transom, then the remaining looped end slides over the same rod on the swivel bracket that the first loop slipped on. See photos near the bottom of this post for how Mercury’s tether is assembled. The swivel bracket is tethered to the transom, just like The Leash.

The tilt cylinder(s) use external relief valves and check valves to allow the cylinder rod to collapse during collision with a submerged object which allows the swivel bracket to swing up with the rest of the outboard.

We combined some of the remaining sections of the patent below: 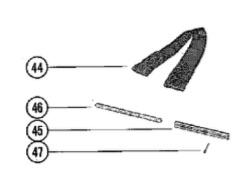 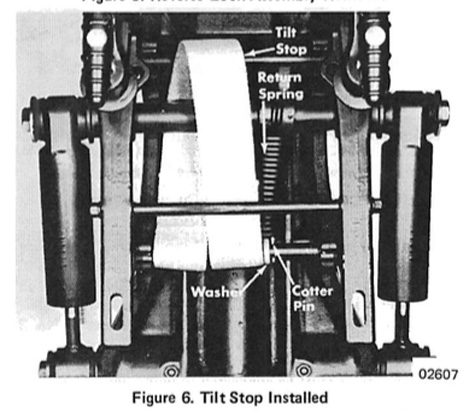 References indicate Mercury was forced to use the tether because too many outboard motors were breaking off. Once Mercury was able to reduce those numbers, they ceased use of the tilt stop straps. New Tilt Stop Straps can still be purchased from several suppliers, plus used Tilt Stop Straps are on the market as well. See the iboats forum discussion below. 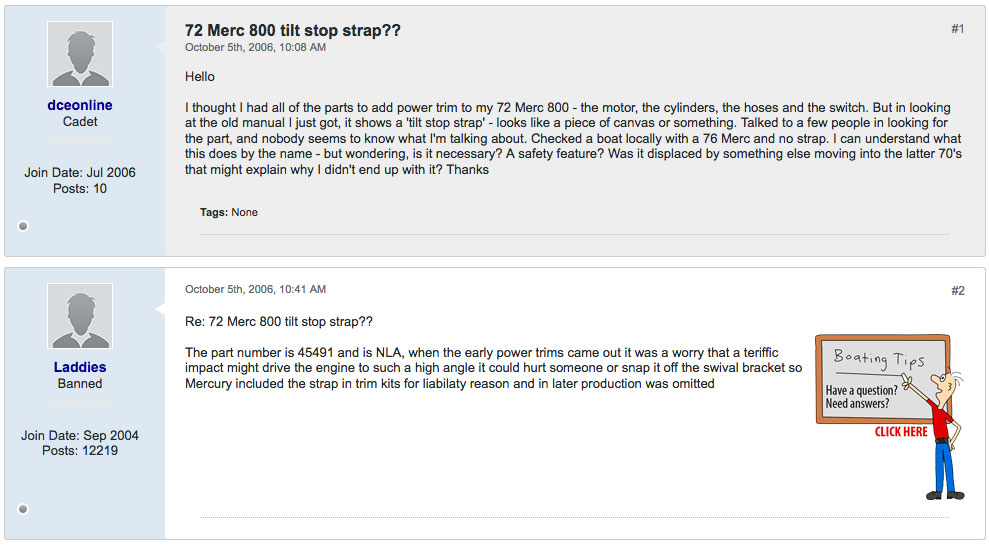 The essence of the iBoat forum discussion is told online in several places.

We have seen references of Mercury Marine’s tethers being used on 40 to 140 horsepower outboards. 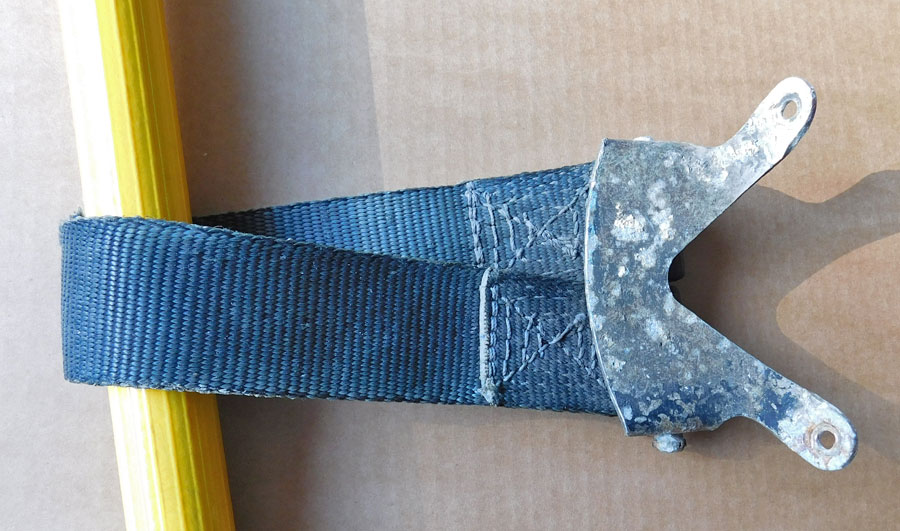 Mercury Marine outboard motor tether assembly for a Mercury 1150 (115 horsepower outboard). The metal part is bolted to the swivel bracket and a rod on the transom mount passes through where the yellow stick is.

Mercury’s tethers were used in a number of configurations, but they always had their end loops tied to the swivel bracket while the middle of the strap passed over a part of the transom structure mounting the outboard to the boat.

In this instance no roller is present over the rod. It may have been lost through time. The small rod has cotter pin holes in both ends of it so a washer could be trapped against the end of the bracket to prevent if from sliding off either end. 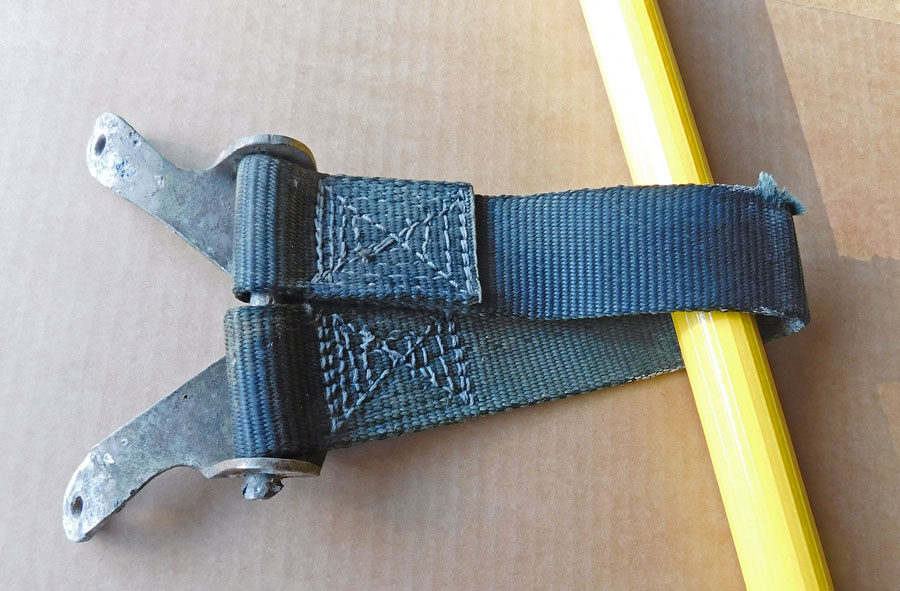 Mercury Marine outboard motor tether assembly for a Mercury 1150 (115 horsepower outboard). The metal part is bolted to the swivel bracket and a rod on the transom mount passes through where the yellow stick is. The other side.

The view above is of the other side of the mounting structure that bolts to the swivel bracket. 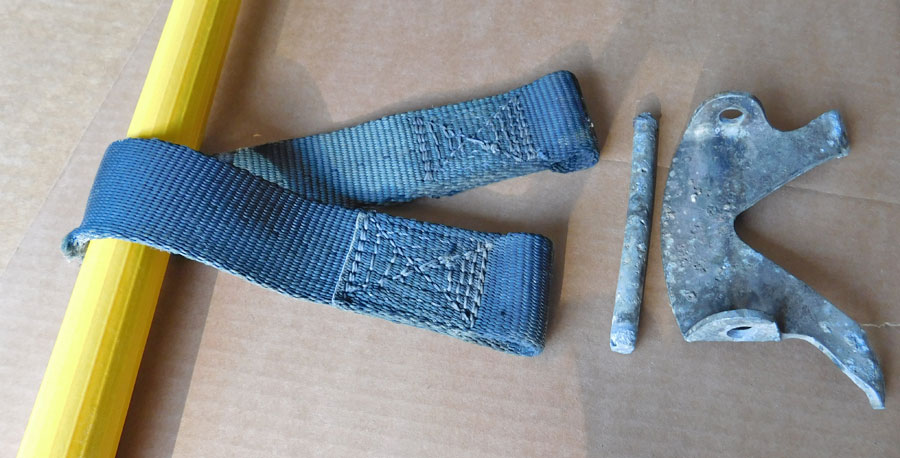 Mercury Marine outboard motor tether assembly for a Mercury 1150 (115 horsepower outboard). The metal part is bolted to the swivel bracket and a rod on the transom mount passes through where the yellow stick is. Exploded view.

Above, the parts are disassembled to form an exploded view. 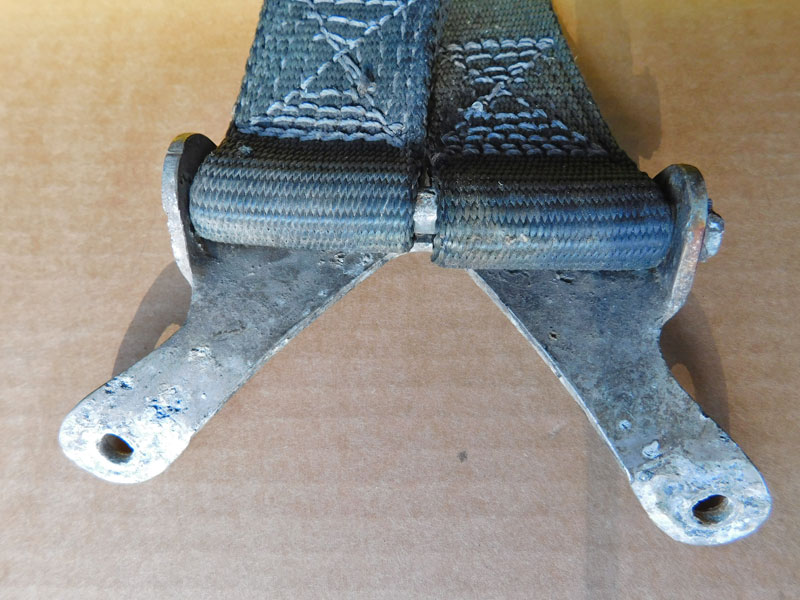 Above, a closeup of the mounting arrangement shows how the loops at the end of the strap attach to the rod.

Mercury Marine’s tethers are still available in a variety of part numbers and lengths for many of their previous installations, as seen in the photo of a new Mercury Marine tilt stop strap (tether) above.

Well there you have it. Mercury started using tethers to restrain large outboard motors about 50 years ago, then quit using them when outboards became more durable and failures decreased. Over time, outboard motors became larger, heavier, and much faster and the problem reared its ugly head again. This time a third party, The Leash, sprang into action with an updated, high tech version the long forgotten cure. Just like the earlier version, The Leash goes around something tied to the swivel bracket and slides over something bolted to the transom. History repeats itself, repeats itself, …