Kali’s law will require the use of kill switch lanyards on certain power boats under 26 feet beginning September 1st, 2019 in the State of Texas.

Texas media outlets continue to vastly over estimate the number of boating fatalities per year that will be prevented by this law.

For example, today, 22 September 2019, CBS Austin posted a story titled, “‘Kali’s Law’ goes into effect Sep. 1st, aims to cut down on deaths from boating accidents”. Portions of that article are copied below. 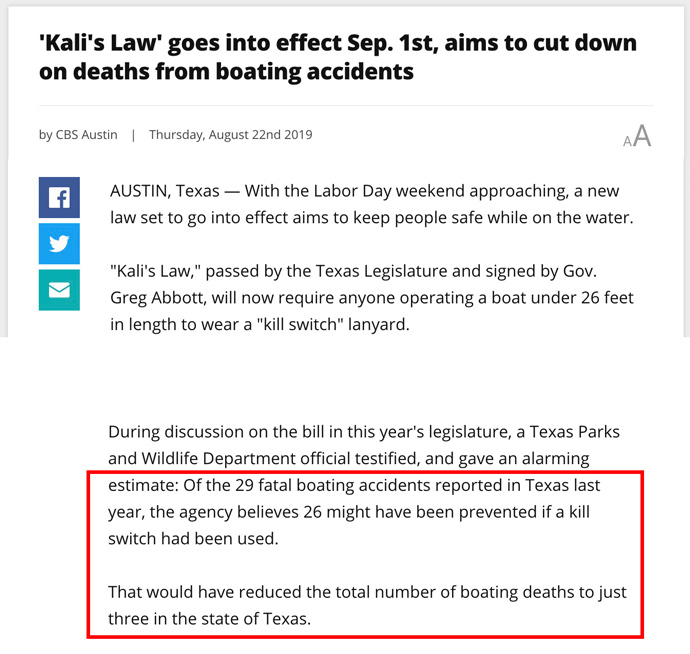 As seen in the article, CBS Austin says if Kali’s Law had been in effect in Texas in 2018, instead of 29 fatal boating accidents, they would have only had 3.

That is a gross misstatement of facts.

As per our earlier report we only found two fatal boat propeller accidents reported by Texas in the U.S. Coast Guard Boating Accident Report Database (BARD) in 2017 (2018 statistics are not out yet). Both 2017 Texas boat propeller fatalities involved a houseboat backing into a father and his daughter. Use of a kill switch lanyard would not have prevented that accident. Thus, per a quick look, NONE of the 2017 boating fatalities in Texas would have been prevented.

We cannot see the 2018 data yet but would expect similar results.

We are not saying Kali’s Law is a bad thing or a good thing, we are saying it is WRONG to be telling the public it will be preventing about 90 percent of boating fatalities when that is NOT TRUE.

When the public finally learns that only a few, if any, of Texas boating fatalities will be prevented in a single year, the next time a new device or new program comes along that says it will vastly reduce boating fatalities, many Texan’s will not believe it, even if it is true.

Type 1. Boat operator and possibly others are ejected and fatally struck by boat and/or boat propeller in the Circle of Death with no one at the helm. They can die from injuries or drown.

Type 2. Boat operator and possibly others are ejected, they are okay but unable to re-enter the boat because it is still circling nearby or continued on. They can drown.

If a fatal boating accident does not look like one of these two types of accidents, use of a kill switch lanyard is likely not going to prevent it. Yes, we can dream up some other situations with a few if’s in them where someone might die if the boat operator was not wearing a kill switch lanyard, but those instances will be rare.

If anybody disbelieves my comments, just consider drowning. Per page 6 of U.S. Coast Guard’s annual boating safety statistics publication, 2017 Recreational Boating Statistics, “Where cause of death was known, 76% of fatal boating accident victims drowned.” Basically 3/4 of boating fatalities are drownings. The use of kill switch lanyards is in no way going to be able to prevent most of those drowning fatalities.

We strongly encourage the media to re-examine the boat fatality data they are publishing surrounding the application of Kali’s Law and print corrections where necessary.