The Emperor Has No Boat – SUNY Propeller Guard Testing 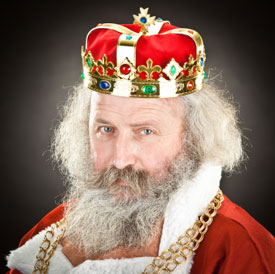 The Emperor has no boat.

CED Investigative Technologies, Inc. has been testing the human factors of propeller guards at State University of New York (SUNY) Buffalo at their Center for Research in Education and Special Environments (CRESE) facility. Some may recall, this is the same facility used by Mercury Marine and Outboard Marine Corporation to test a propeller guard back in late 1990. CRESE has a large circular water tank resembling a doughnut from above.

We took the liberty of capturing a few seconds of video from one the tests ran at SUNY many years ago that used to be posted on their web site. It shows the general layout and the rotating arm with the outboard mounted to it with the outboard’s propeller sticking down into the water.

On September 29, 2010 CED presented their preliminary results of their human factors testing of propeller guards at IBEX (a large boating industry trade show) during the Accident Mitigation Workshop: Carbon Monoxide and Propeller Injury Avoidance Meeting sponsored by the U.S. Coast Guard and put on by the American Boat and Yacht Council (ABYC). The human factors testing consisted of cylindrically forming ballistic gelatin to lengths of PVC pipe and suspending them in CRESE’s tank at certain horizontal distances from the center line of the propeller as the drive rotated by, as the drive was stationary, or as the drive was reversed. The test specimens looked a little like wind chimes suspended in the water. Observations were recorded as to which of the chimes was struck and the severity of damage to the chime for each guard being tested at a range of forward speeds, stationary, and in reverse. Similar data was collected for an exposed propeller. The collection of data for an exposed propeller is a bit interesting, as back in the 1990 testing, Mercury Marine was very adamant that absolutely no testing of exposed propellers was to conducted at SUNY.

CED presented another round of human factors propeller guard test data at the Miami International Boat Show on February 17, 2011 during the Accident Mitigation Meeting: Carbon Monoxide and Propeller Injury Avoidance held there. This time they released data from testing the Australian Environmental Safety Propeller and some additional test data on Guy Taylor’s 3PO guard.

Both times CED summarized their human factors propeller guard test data as a matrix showing the conditions on the left side (reverse, parked in gear, 5 mph, 15 mph) with the type of guards listed across the top. CED placed a red “X” in the cells in which the chime showed impact. The chart from their February 17, 2011 presentation is provided below. We are not swearing our identifications of guard manufacturers are correct, but from the photos they look like: 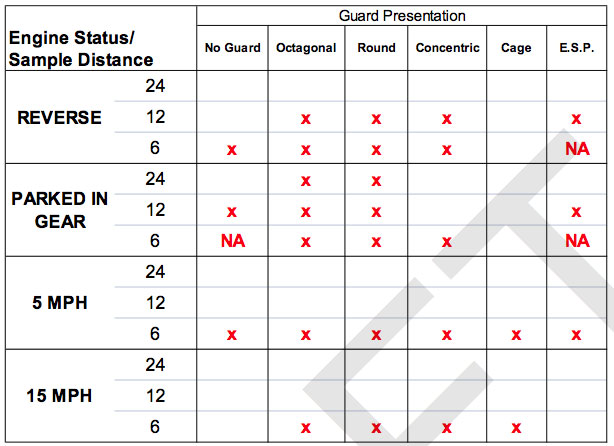 The SUNY CRESE test apparatus primarily consists of a large rotating arm that suspends the outboard motor over a circular tank filled with water. The test apparatus can be seen in the video above, and in the photo below supplied by CED during their February 17, 2011 presentation at the Miami International Boat Show. 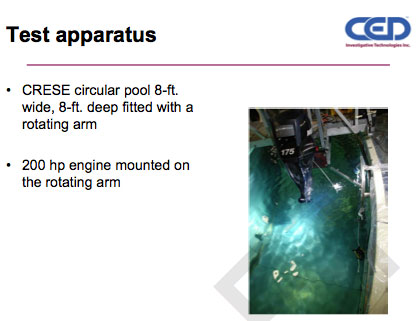 Is their anything missing in these images? The Emperor has no boat! All the testing was done without a boat hull. While SUNY provides a great place to do nice consistent, repeatable testing, the data collected there IS NOT useful for predicting contact with the chimes because no boat hull was used.

CED went straight from the old cadaver body part propeller guard impact tests ran at SUNY, to implying their their human factors testing is a reliable indicator of the probability of a given guard impacting a chime at a specific distance from the centerline of the propeller out in the real world outside the SUNY tank. They also imply that probability is directly comparable to the probabilities of contact with other guards in the real world developed during the same SUNY tests.

The only usefulness of their probability data is to divers in the SUNY tank as the outboard goes by them. It is not relevant to the real world because their test apparatus did not include a boat hull. The Emperor Has No Boat.

Streamlines, propeller intake pressures, and propeller exist pressure patterns are not the same with and without a boat hull. Those pressures and streamlines play a large role in determining if the guard will strike the chime or not.

Look behind your boat while you are going across the lake. You see the overlaying of three primary wake patterns: the boat hull, the wake of the drive, and the jet out the back of the propeller. The largest of those patterns is the boat hull. It was not even present in the SUNY testing. The Emperor Has No Boat.

Just type propeller hull interaction into Google and you will see countless technical articles on the hydrodynamic interactions between boat hulls and propellers. Another area of related study is hull, propeller, rudder interaction.

Certain types of boats tend to be involved in certain types of propeller accidents, such as houseboats striking people when reversing from shore. The houseboat is in shallow water and the propeller may actually be recirculating some of its flow as you begin to reverse (flow exits the prop then swings out, around and back forward to come through again because little water is available under the boat. The prop is sucking the water out from under the boat, the boat may actually squat some at the stern, and water may be recirculating through the prop until the boat comes up to speed in reverse. Those types of factors have a lot of effect on whether a chime would be pulled in or not.

Those defending testing without a boat hull might say, okay, so boat hulls influence pressures and streamlines. Their impact would be equally felt by all the guards we tested so our data is still at least a relative indicator of a strike or not. No, the various guards themselves effect propeller streamlines and pressures in their own way. The system of guard + propeller + drive + hull creates a unique set of streamlines and pressures for each of those combinations.

We find it humorous that the industry always argues in legal cases that any testing has to be done with the EXACT SAME boat that was involved in the accident and strongly rejects any testing done by victims lawyers using the same model and year of boat, just not the exact same boat. Now they leave the boat out all together and say the system represents all boats. The Emperor Has No Boat.

We noticed one reference to our concerns in the minutes of the February 17, 2011 Accident Mitigation Meeting.

“A brief questions and answer secession (sic) ensued. The question was posed whether a boat hull would create different outcomes. The intent of the protocol was to identify opportunities for propeller contact in a controlled environment. A discussion ensued about the use of live boat testing. The consensus was there may be value in determining the hull interference in propeller strikes.”

The emperor has no boat!