We have been promoting the use of Computational Fluid Dynamics (CFD) in the development of prop guards for a long time. It’s been on our Help Us page for several years, we mentioned CFD in our January 2009 post on a Propeller Guard With Reduced Drag, and just a few days ago we briefly discussed the use of CFD in our The Emperor Has No Boat: SUNY Propeller Guard Testing post. In addition, our efforts to encourage engineering and design students working on student projects, thesis, and dissertations to consider studying propeller guards has a student that looks like he is going to be working at least in part, on propeller guard CFD.

Computational Fluid Dynamics (CFD) is a natural fit for propeller guard design. It allows sorting through the design variables to optimize the propeller guards to reduce drag, minimize their impact on boat handling issues, make sure cavitation issues do not cause a problem, and even test the interaction between propeller guards and humans (human factors issues of being struck by a guard, being entrapped, or being pulled into a recreational boat propeller).

As we mentioned last week, CFD allows modeling the entire system (boat hull, drive, propeller, propeller guard). This is not a pipe dream. In 2009, Mercury Marine gave a presentation titled, Validated Planing-Hull CFD Simulations at STAR Global Forum 2009. More recently, at the Second Chesapeake Power Boat Symposium in March 2010 Mercury Marine presented a paper titled, “Use of Commercial CFD Codes to Enhance Performance Prediction Capabilities for Planing Boats.” Brunswick’s Mercury Marine has also produced CFD models for a system of contra-rotating propellers, pod drives, gear cases, and boat hulls and validated their model against real world testing. A section of their 2010 paper was titled “Propeller/Pod/Hull Interaction”. All they have to do is add a guard. 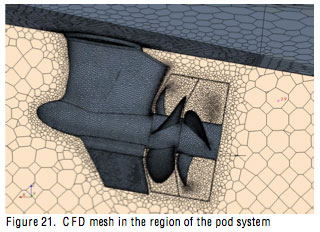 Figure 21 of Mercury’s 2010 paper by John Scherer, S.K.R. Patil, and Scott Morton is titled “CDF mesh in the region of the pod systems”. The image shows the mesh system the authors developed in the area of the pod drive propeller. In general, the finer the mesh, the longer the computing time, but the more accurate the result. You can see they took the mesh very fine around the propeller blades. They say they are using about 1.9 million cells, running on 16 processors and getting one run (like one boat speed) in about 10 to 20 hours. Thus it takes them about a week to develop a curve (several boat speed points) for a given design. They can run faster using a larger mesh but the runs do not validate as well with real world test data at higher boat speeds. Mercury Marine mentions they are using symmetry to allow the model to run much faster (only run one side, the other side is the same). From the article, it is not clear if the 1.9 million cells represent both sides of the symmetry or just one side (3.8 million cells total).

In its current state, CFD lends itself well to optimizing propeller guard designs to reduce drag. It can also show the benefits available from a built in guard designed from the ground up to better integrate with the drive. As computer power continues to grow in both speed and capacity per dollar spent, its going to continue to get better.

The next step is see how well the optimized guards perform near people. Do their larger diameters actually result in more strikes?, Are their entrapment issues with some guards?, Do guards suck people in worse than an open exposed boat propeller? How much damage do guards cause to people they strike? The propeller guard test protocol being developed by the U.S. Coast Guard was supposed to address some of those issues. As we discussed recently in Emperor Has No Boat, USCG / CED tested guards at SUNY / CRESE in the large circular tank by using hanging water chimes made from PVC pipe and ballistic gelatin. However, the failed to include a boat in their testing. In our opinion, that invalidates their ability ability to make the insinuations they did about which guards might pull in people, or strike them at certain speeds and distances from the center line of the propeller.

Computer simulation and computer modeling are just about to provide a solution to the human factors testing of propeller guards too. SUNY’s nice big circular tank provides a good controlled environment that can produce repeatable results. But the tank is not large enough for a full size small boat. We suggested possibly moving to a very large naval model test basin, but another alternative exists.

SantosHuman is an avatar developed by the U.S. Government and several major companies for testing how humans can perform tasks in military, workplace, and other environments. Much of its development has been done under contract by the University of Iowa. Santos was recently discussed in a June 2011 Design News article titled, Putting Physics Into Human Motion. Santos is much different than normal avatars. He includes virtual bones, virtual muscles, and the ability predict motion and to react to movements on his own. Other investing in Santos in addition to the U.S. military include Ford, GM, Caterpillar, and Honda. In the Spring of 2011, researchers were awarded an up to $8.6 million contract to study soldiers carrying loads. SantosHuman, Inc. is the commercial enterprise developing civilian spin off uses of the military technology.

Santos responds to loads placed on the body (its easy to imagine those loads being placed by a CFD model of a boat, hull, drive, propeller, propeller guard system). With Santos in the water, some work could be done on positions, exposure, entrapment, strikes, and other concerns that “if the model was verified” could translate to a lot of real world knowledge that could be applied to products designed to mitigate propeller injuries.

For those who think this may be taking things too far, a Computer Graphics World July 2010 article titled, “Putting Science to Work” says “Someday we may spot Santos testing running shoes, evaluating swimming suits for an Olympic team, …”

I would like to be clear, I am not suggesting we put aside any of the current efforts to improve propeller safety until these tools are available. However, I am saying the U.S. Coast Guard and the boating industry are in a position to speed up their development if they so wish.

The boating industry might also want to be thinking about how they are going to respond to questions in a product liability propeller accident case about why they are not taking the small step of adding a propeller guard to their Computational Fluid Dynamics models to study the performance and optimization of propeller guards.