We mentioned in our earlier post on using wordles to explore propeller safety topics our intention of using wordles to identify common threads in media coverage of propeller accidents. For those not familiar with wordles, they are a form of word art in which the relative size of a word represents its relative frequency in the text being studied. This post is the first of a series exploring the use of wordles to better understand news media coverage of propeller accidents.

As we have looked at thousands of news reports of propeller accidents and their victims, we see common threads in printed and televised news media coverage, especially in the coverage of high profile propeller accidents resulting in critically injuries. News media coverage of a propeller accident typically begins with a news bulletin including the sex and approximate age of the victim, the location of the accident, date and approximate time of the accident, a mention of the propeller being or possibly being involved, and citing officials on the scene. These initial reports also often mention the victim being life flighted by a specific service to a named hospital. Law enforcement officials often mention an investigation is in progress to determine the cause of the accident and may note alcohol or negligence on the behalf of others may have contributed to the accident. Other family members on the scene are sometimes identified by position only (father, mother, brother, uncle) and not by name. The area of their body struck by the propeller is often identified (legs, thigh, arm, torso, etc.).

Often the next day, news reports will release the name of the victim, more details surrounding the accident, and their current medical status.

After the victim has been in the hospital for an extended period of time, the news cycle comes back and covers their progress. Those injured are often shown to have a great outlook on life and an excellent attitude considering their circumstances. Some are beginning to discuss the use of prosthesis to replace missing limbs, physical therapy, and their continuing surgeries. Mounting medical bills are mentioned, a lack of insurance is noted, and community fund raisers are planned. Mothers are often the spokesperson for injured children.

When they are actually released from the hospital to go home, a crowd of well wishers, caregivers, family members, and the media is on hand. The victim’s family members are grateful their loved one is still alive, and appreciation is expressed for the care they received, and for those who card for and rescued them.

Often, one year after the accident, the local media will do a follow up story with the person injured in the recreational boat propeller accident. Sometimes, even later the boat propeller accident victims are in the news again with either a product liability case, or a civil case against a boat operator for their injuries, or participating in an athletic event.

We are going to analyze news media coverage of propeller accidents by examining numerous news reports of each of the phases of coverage of a specific boat propeller accident. We selected the Gabby DeSouza accident as an example because it represents a high profile accident involving a young 14 year old girl earlier this year (2011).

On February 5, 2011, a 14 year old girl named Gabby DeSouza was struck by a boat propeller in Florida. She eventually lost part of her leg from injuries suffered in this high profile propeller accident.

The Gabby DeSouza propeller accident received a tremendous amount of coverage. The news media followed he from being an unnamed 14 year old Palm Beach Gardens Florida girl struck by a propeller as she was preparing to board a boat south of Juno Beach Pier near Juno Beach Florida, to becoming being named, to becoming a normal, fun loving, teenage girl a month later as she texted friends and dreamed from the hospital of shopping at her favorite mall again.

When she was finally released from St. Mary’s Medical Center to go home, the press was on hand once more. The classic outpouring of gratefulness and thankfulness for all who helped was expressed.

We took a collection of news articles represented three of these news media phases (breaking news reports, been in the hospital a month, and being released from the hospital) from our archives and we wordled them. Comparing and contrasting the resulting wordles of the three different phases being examined at this time provides insights into news media coverage of propeller accidents. No single news item overwhelms the resulting wordles. The size of individual words is built up from their use in multiple articles by mulitple news organizations.

We have been thinking about this project for quite a while, but just recently began to actually process all the text. As I was finishing the wordles very early the morning of July 1st, 2011, I noticed a somewhat similar propeller accident beginning to unfold in Virginia Beach Virginia media involving a 12 year old girl. We suspect the news media there will It will follow the same patterns there. Now as we are trying to finalize these posts very early the morning of July 2, 2011, I have been in communication with a member of the Virginia Beach media concerning the accident there and mentioned our work on this project.

Our wordles of the Gabby DeSouza accident are going to be posted a series of articles: Phase 1 (Breaking News Reports) , Phase 2 (Hospital Stay), and Phase 3 (Released From Hospital) due to the file size of wordle images.

We pulled the text from seven news stories covering the February 5, 2011 accident that are dated February 5 to February 6, 2011 from our archives for use in creating our Phase 1 wordle of the media coverage of the DeSouza propeller accident. A brief list of those articles is below: 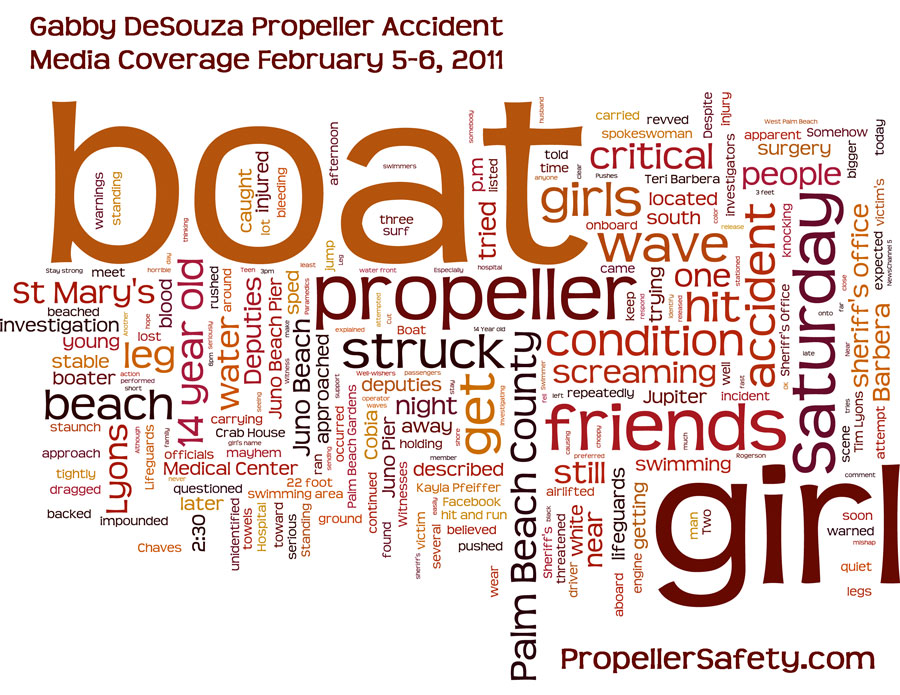 There is minimal mention of her life as a teenager. We see the term friends and the word Facebook, but thats about it words you might associate with a teenager.

Her name is noticeably absent and she was not publicly identified in the breaking news reports.

One characteristic of wordles we find interesting is they can be zoomed in to view the terms shown in smaller fonts. We zoomed in the pdf we originally made and cropped a small portion of it so our viewers could have this experience too. Just download the Propeller Accident News Media Coverage Phase 1 Wordle Zoom to see a magnified portion of the wordle.

We anticipate a significant change in the terms being used in later news coverage of the Gabby DeSouza propeller accident and in the font size of any of these terms that remain.

Please continue reading by moving to Phase 2 The Hospital Stay