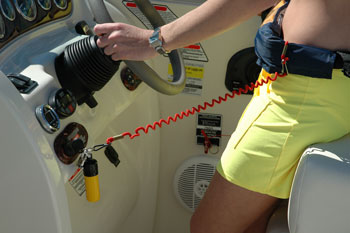 The United States Coast Guard (USCG) published an Advanced Notice of Proposed Rulemaking (Regulations) in the Federal Register on June 8, 2011. The proposal is titled, Installation and Use of Engine Cut-Off Switches on Recreational Vessels.

As part of the proposal, the Coast Guard also published a Preventable Fatalities and Injuries Report listing boating accidents from 2002 through 2006 in which the use of an Engine Cut-Off Switch / Kill Switch would have likely prevented the fatalities or injuries resulting from an operator falling overboard or otherwise being ejected.

The USCG proposal includes a Background Section with a history of the Coast Guard’s efforts to reduce vessel and propeller strikes since about 1990.

USCG’s advanced notice of proposed rulemaking does recognize some of the wireless lanyards on the market, like MariTech’s Virtual Lifeline, and provides a path for their use.

We submitted our public comments on August 29, 2011 and posted them online the next day.