This session focused on those on board, the boat, what was going on in the boat prior to the accident, and how Robin Listman’s propeller accident occurred.

We heard from three attorneys:

Over the course of the questions, they established all three individuals had a long history of boating. 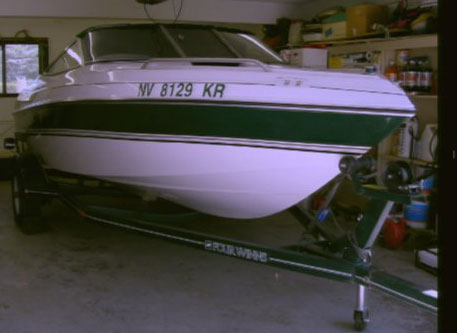 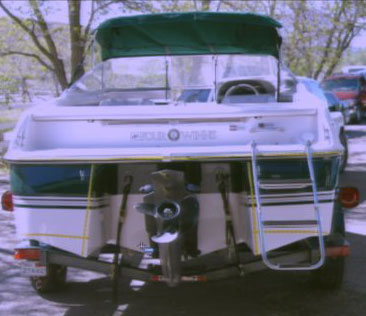 The two families very frequently camped and boated together at Pyramid Lake on weekends. Each family also brought along two young children. They camped, tubed, wake boarded, water skied, and just boated around in the lake.

Lisa has been boating on Pyramid Lake since she was small.

She and her husband gave about $12,000 for their boat. They bought it used with just a few hours on it. They negotiated the best price possible.

McNally asked her, Would you be willing to pay another $15,000 for a propeller guard and still bought that boat? No.

The $15,000 propeller guard question was raised later too. We suspect it might refer to the development cost of the exemplar guard produced for the plaintiff’s legal defense. 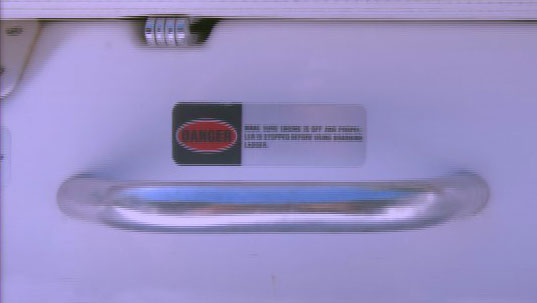 The warning at the helm is part of a much larger warning panel at the helm.

The Listman’s had a boat similar but just a little smaller than the Porsow’s boat, but it was outboard powered.

On the day of the accident, Robin Listman was riding an air chair (a towed board on a foil that rises up out of the water when underway at speed).

The wind picked up, one of her kid’s float toys (later identified by others as possibly being an inflatable dinosaur) blew of the beach, into the lake, and began to float away. Her boys started yelling or crying about their toy because they could see it from the boat.

As they were trying to coral the float toy, it blew behind the boat. Lisa looked and saw Robin standing on the swim platform with one foot over the water and the other knee bent, then she went into the water. Lisa does not know if Robin jumped or fell in, but tends to think Robin jumped in.

As Robin entered the water, Lisa heard her husband click the drive into reverse, Lisa yelled that Robin was in the water, her husband immediately stopped the boat.

Jeanney noted Lisa earlier mentioned she did not remember the warning decals. She said, “I don’t pay attention to those.”

Ouch! I bet the defense winced on that one.

As the boat approached the water toy, it was blowing around on the water. The man up front (David Lloyd) was going to try to grab it but never got close enough. David Lloyd and Mark Porsow were discussing what to do next as the toy blew around the right side of the boat to the stern. They decided to backup the boat. All of a sudden Lisa Porsow sees Robin Listman standing on the swim platform with one leg extended toward the water and the other knee bent, as she hits the water the boat goes into reverse. Lisa Porsow yells that Robin is in the water, Mark Porsow immediately shifts the boat to neutral.

Robin is recovered to the boat. It was very traumatic.

They talked about the discussion before Robin appeared to jump off the boat.

Lisa Porsow said she does not know if Robin Listman jumped in or not.

Many of the discussions focused on whether Robin Listman jumped in or fell in.

Mark has been to Pyramid Lake near 100 times.

Mark bought his boat used with only 13 hours on it. The boat came with a manual. He paid $11,500 for the boat after negotiating for the best price. Price is important. McNally asked, “Would you have paid another $15,000 to add a propeller guard like this to the boat and still bought the boat?” No.

This is another mention of the $15,000 propeller guard. We suspect he pointed at the guard the plaintiff’s legal team had developed and $15,000 was the development cost.

Mark still has his boat.

At the time of the accident, everybody was wearing life jackets. Four kids were on board. Two were his and two were Robin’s. They ranged from 4 to 9 years old.

They were towing Robin on the air chair, a floating dinosaur blew off the beach. Robin’s youngest boy was screaming about his toy blowing away. Robin wanted to stay out in the water while the boat went to get the toy but Mark would not let her. She got in the boat.

McNally was smarter this time. He started showing some photos of the warning decal at the stern before he started asking Mark about them.

McNally asked, Is there a label right above the handle (grip near the ladder)? Yes (Mark could see it prominently in the photo he was being shown as the question was being asked.

We were thinking McNally learned from his questions of Lisa Porsow when he showed Mark the grip decal photo before he asked him about it, but we guess not.

Mark described the scenario when they were trying to retrieve the toy. At one point he was jockeying the boat forward and backward downwind of the toy waiting for it to blow toward them.

Kevin Listman was not in the boat at the time Robin was struck by the propeller.

When Robin was struck, Mark shifted the boat to neutral, ran to the rear and jumped in. At one point, the water was only chest deep and he was able to lift her into the boat. They quickly took her to shore. At that time (2001) some cell phones did not work at Pyramid Lake depending on which phone service you had. They were unable to call 911.

They were able to make a cell phone call while in transit to town and a chopper was dispatched to meet them. Robin was taken to Washoe Hospital. He later saw her in the hospital, but never asked her how the accident happened.

Jeanney asked Mark about the accident when he shifted to neutral, ran to the back of the boat, jumped in and saw a lot of blood in the water extending about 20 feet around Robin. Mark did not recall saying the blood extended for 20 feet around Robin in his deposition back in 2005.

Once Mark picked her up, he could see her lower right leg was severely injured and they needed to get her to a hospital as soon as possible.

Jeanney asked about the design of the boat with people sitting on the swim platform above the propeller while they were getting ready to ski, and the ladder being so close to the propeller.

Jeanney asked, Is a spinning propeller dangerous? Mark said, No, how could that be.

A propeller itself is not dangerous.

Redirect of Mark Porsow by OMC

McNally asked, Do you feel that the spinning propeller itself is dangerous? No

McNally asked, Why not? Mark responded, I don’t know how to answer it. How?

McNally asked, Is it only dangerous when someone comes in contact with it? Mark responded, I would guess so, Yes.

McNally asked, So in and of itself, a spinning propeller is not dangerous? Mark responded, I concur.

McNally is trying to get entered into the record that spinning propellers are not dangerous unless someone comes in contact with them. We think the jury will be smart enough to counter with something like, Atomic bombs are not dangerous either until they go off.

Mark Porsow came across as a nice, very conscientious guy with a little trouble hearing, and a little nervous. He has an agricultural degree and works at a local golf course. It was revealing to see him a bit confused by the laser pointer he was given to point out some details. OMC seemed to be trying to show that he was a safe boater. Through out the sessions this morning it was brought out that:

The Porsows both seemed like a great family to go boating or hang out with.

McNally began questioning him for OMC. David’s wife had met Lisa Porsow in a Mom’s Club. The families began boating together and he met the Listman’s through the Porsows. David owns a Sea Ray boat.

David has been in the Porsow boat 20 to 50 times. David was in the bow of the open bow boat trying to retrieve the blowing float toy just before the accident.

When the toy blew to the stern, he heard the clunk of the boat shifting to reverse, then he heard a very similar sound which he thinks was Robin’s leg hitting the propeller.

David ran to the back of the boat with Mark Porsow, Mark jumped in, David went back to the helm and shut the motor off, it had been left running in neutral.

David Lloyd is a mechanical engineer. He came across very calm and collected. You could tell he paid attention to details in the way he answered several questions, and you can see it in his response to the accident (being collected enough to go back forward and shut the engine off before they have an even worse accident.)

He also seemed like a nice guy that would be fun to go boating with or hang out with.

When Mark Porsow retrieved Robin, she was laid on the engine cover, David took Robin’s children forward to the bow to shield them from what they were seeing.

On the way to shore they yelled at others on shore to call 911 (since the cellphone on board would not work at Pyramid Lake).

As soon as they got to shore, David started looking for any vehicle they had keys too and found one, Robin’s Expedition.

David was aware of a place on the way to town where their cell phone service would work. They stopped there and called 911. While stopped, a Ranger from the tribe stopped, he had been called by some of the people on the beach they had been yelling at to get them to call 911. The Ranger saw how injured Robin was and began to escort them to town at a pace less fast than David thought he should have been going.

Enroute, they were met by a CareFlight life flight helicopter.

Jeanney, You were afraid she was going to die? Yes.

Everybody had some memory problems.

That is what you get when these trials extend to a decade after the accident. It becomes more difficult to discern exactly what happened.

OMC seems to be pointing to either it being Robin’s fault for jumping in the water, or just an Act of God (it happened so quick it could not have been prevented). We have seen countless similar quick propeller accidents. For example the recent Jacob Brochtrup trial (he jumped in to retrieve a tow rope just as boat shifted to reverse), others go down water slides just as house boat is shifted to reverse, some swim up to the stern just as the boat shifted to reverse. We noticed several motions earlier of OMC trying to prevent the existence of other propeller accidents into the trial.