We were disappointed with the total number of responses, but thank all those on both sides of the propeller safety issue for responding.

As of today, December 2nd, USCG lists a total of 27 items in that docket. We will list and briefly summarize them below, by Docket Item Number.

1. The notice of the proposed rule.
2. Pam Anderson – a grandmother mentions need for licensing.
3. LeRoy W. Leland – concerned the regulations are an over reaction.
4. Joel Robertson Shine – don’t punish responsible operators with more regulations
5. Francis Stack – mentions CO and propellers, says we do not need this new regulation

16. Margaret B. Podlich / BoatUS – opposes the rule, we address their comments below
17. Robin M. Listman – propeller victim speaks out for the proposed rule and cites 3PO guard with flip up shield, and electronic measures not being in USCG study.
18. Janet Mary DePaoli – mother of a propeller victim speaks of her daughter and of SPIN’s founder (another victim’s mother) closes with “prop guards now!”
19. Nita Bpoes – for the prop strike and CO rule, will make her more willing to encourage and enjoy boating with her family
20. Karen Niehaus – daughter of a friend was killed on a jet ski accident, is for the proposed rule

26. Marine Propulsion Technologies – MPT Thrustor, answers questions, we will address their comments below
27. Terrance L. Smith / MPT – MPT Thrustor and 3PO guard provide stern lift (interesting to see them mention another guard too). Wants USCG to tell entities there is a cure for go-fast boats.

Quick Talley of the Responses

Of the 26 public responses, four individuals plus NMMA and Boat U.S. spoke out against the proposed rule (6/26 = 23 percent). One person mentioned the need for licensing and another mentioned the need for boat rental instructions. Marine Propulsion Technologies (MPT) turned out in force for their MPT Thurstor with a total of 9 comments. Guy Taylor’s 3PO Guard was mentioned three times, including once by a propeller strike victim.

As Larry Rowley of Guy Taylor’s Navigator 3PO operation mentioned, it did not get a lot of press. We (PGIC) posted it on some boating forums and on boating industry sites covering the Listman trial, but we saw no direct mention of it in any boating industry press. Its not even mentioned on NMMA’s Environmental Safety & Compliance Propeller Injury Avoidance Measures section.

Perhaps more telling was who was not represented in the responses. We see no comments for many other propeller safety device manufacturers, from boat builders, from marine drive companies (nothing from Mercury Marine, or any Brunswick company), nothing from the U.S. Small Business Administration Office of Advocacy (they usually speaks out with NMMA on impact of proposed regulations on small businesses). Plus few comments from propeller victims and none from Carbon Monoxide victims.

Also missing were the defense expert witnesses that tout their knowledge of propeller guards and other propeller safety devices in front of juries and tell them why these devices do not work and will never work. The boating industry paraded them in front of the Listman vs. Outboard Marine Corporation (OMC) jury the same month these public comments were due in, but apparently none of these experts chose not to share their knowledge with the Coast Guard.

But, before we are too rough on the defense expert witnesses, we don’t see the plaintiff expert witnesses here either. And while we are at it, we don’t see medical experts from either side that could shed some light on questions USCG asked about the impact of propeller injuries on peoples lives.

Plus where is CED Technologies the USCG contractor that worked on establishing the propeller guard test protocol? and where is ABYC?

Where was Richard “Dick” Synder, long standing propeller guard expert from Mercury? Where was Pete Chisholm of Mercury? What about Richard Staerzl of Mercury, inventor of their infrared device to detect people in the water they talked about for a while. Nobody from Mercury even told USCG about their new Moving Propeller (MP) Alert spinning light system.

And what about OMC. We recognize the company no longer exists, but their legal defense does. Why didn’t they speak up? And what about Bombardier who still has the Evinrude and Johnson outboard lines?

We commend those that did respond, including the ones we may not agree with. However, we are disappointed so many chose not to respond.

BoatUS said the Advanced Notice of Proposed Rulemaking (NPRM) “brought forth vague questions that make it difficult to provide constructive comments on any proposed policy prescriptions. We agree the NPRM had an inordinate number of questions and was not easy to answer for or against in broad terms.

They suggest that any future rulemaking by USCG must develop specific data on how the proposed changes will impact the number of annual casualties from propeller strikes and CO2 poisoning. First, it’s CO poisoning not CO2 poisoning, and second, estimating the number of casualties that would be avoided is very difficult, in part because the industry has blocked all previous pilot testing opportunities (like USCG’s houseboat propeller injury mitigation NPRM opportunity to pilot implementation on rental houseboats). And, as BoatUS mentioned, this NPRM is pretty vague in terms of exactly what it is proposing.

BoatUS feels the wide variety of on water activities make it impractical to enforce operating regulations or limitations on boaters (speaking killing the engine with people in the propeller danger zone), and once again they favor education as the best way to handle this problem.

They call for USCG to place greater reliance on standards developed by the boating industry itself through ABYC, and mention ABYC’s underwater ladder length research. BoatUS calls for USCG to support ABYC with additional resources to develop standards when necessary. We commend ABYC for their underwater ladder length research, but fault the industry for not applying what they learned.

Typically, industries try to set their own standards just high enough to keep the regulators off their back. If that is the boating industry’s choice, in our opinion, the industry should not be seeking funds from USCG to achieve those efforts. They should be funding them themselves. USCG monies come from taxpayer pockets. Why should taxpayers be paying the boating industry to create standards they should be creating on their own? We do understand that technical issues or testing facilities may be a problem at times for the industry, and in our opinion, it is totally appropriate for USCG to step in with funding or facilitating some help in those situations.

For example, USCG stepped in with funding and guidance in developing the propeller guard protocol test because the industry would have never undertook that project on their own.

BoatUS closes by saying they appreciate USCG’s interest in prop strike and CO2 poisoning casualties (they got CO wrong again) and look forward to to the development of regulations that enhance safety while making boating a favorite activity of millions.

We were a bit surprised by BoatUS’s comments, which reasonably mimic those we normally hear from the boating industry. We do understand their desire to keep boating hassle free and as free from regulations as possible so boaters can freely enjoy the outdoor experiences of boating. But some sections of their letter sounded a little like they were written by NMMA, always presenting education as the cure. What about the educational efforts USCG made, like the Don’t Wreck Your Summer propeller safety public service announcement (PSA) video the industry banned because they thought it showed boating in a bad light? In addition, BoatUS’s comments did not include a single phrase encouraging boat and drive manufacturers to employ the “variety of approaches” (BOAT US previously mentioned) where appropriate. 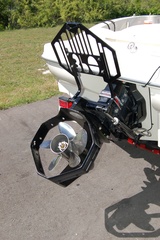 He talks about working with people that have been injured by propellers, his 3PO ring with a shield, and his recent efforts to add some forward protection to his guard as well. Guy talks about being present at a propeller accident involving a young girl this past summer. He notes the long standing industry opposition to propeller guards and points out Richard Snyder recently made a presentation at a NASBLA Accident Investigation Training Seminar in Phoenix in which Mr. Snyder said propeller guards do not provide adequate protection and cause boat handling problems. Yet, in 2007, Richard Snyder tested the 3PO guard in the Brochtrup case and later testified he was surprised that Guy’s guard did not cause adverse effects or bad handling on this particular boat.

Guy is also upset that his guard was not included in the list of potential propeller injury control devices that Dick Snyder included with his training materials at the seminar in Phoenix. That list is also published by USCG’s Office of Boating Safety. Guy is sure they are aware of his guard, but he is not on the list.

He promotes boating safety classes, briefly discusses Carbon Monoxide poisoning, and encourages changing they attitude from “this is not possible” to “let’s see how to make it work.”

We salute Guy Taylor for his excellent, well articulated, well informed, response. We agree with many of his points, and sympathize with his frustrations about the way he has been treated by the boating industry. While we mostly covered some of his frustrations, his letter was much broader and was very well done.

As mentioned earlier, they also had a banner turnout of letters from employees and users of their MPT Thrustor.

MPT’s five page letter was the only letter besides ours that specifically addressed individual questions raised by USCG. They did so with a two color scheme that made it extremely easy to follow. USCG questions were in black, MPT responses were in red.

MPT opens their letter citing an attachment from HM 14 Chief Moore (a Navy group using their Thrustors) but we were unable to find the attachment.

MPT stresses their positive experiences with U.S. Navy applications and note their Thrustors actually have some upsides (improved handling, stability, protects propeller from damage) instead of the downsides often associated with some other approaches.

Discussing ABYC’s longer swim ladder initiative, MPT says that given human behavior, nothing you place near an open spinning propeller will prevent a continual stream of injuries. They cite the same statement in responding to USCG’s question about the use of interlocks.

In response to USCG’s question about turning the engine off with people in the propeller danger zone, MPT cites the same statement again, and say safety solutions cannot rely only upon policing human behavior.

Several of their other letters indicated their frustration with the lack of industry response to the Thrustor. That is a common thread among most propeller safety device manufacturers.

We commend MPT for supplying a very thorough response, for addressing several of the smaller issued overlooked by others, and for successfully encouraging several others to respond as well. Well done!

Public Response was Minimal as was Awareness

A Google search for USCG-2011-0497 on 2 December 2011 turns up a few USCG pages, our site, some bulletin boards we posted info on, a Colorado Safe Boating twitter message, and a negative article in the 9 September 2011 Newport Beach Independent. We responded that article a few days after it was published pointing out their statistics were wrong. Then we were bashed by a reader that got his facts wrong too.

USCG may extend the comment period. They have on some past proposals that received minimal response.

Response may have been limited by the recent Kill Switch proposal. Responding takes some effort, and when people just responded, its hard to get them to turn right around and respond again. Plus the responses were due the day after Thanksgiving. Its hard to get anybody energized over a long holiday.