What is Blunt Trauma?

Many of us hear or use the term, blunt trauma, without really understanding what it means. We grow up hearing about people being hit by blunt objects and suffering blunt trauma, but just exactly what blunt trauma is remains a bit nebulous.

When the human body is struck by a blunt object that does not penetrate the body, the body must absorb the blow. That energy can be absorbed by:

Underwater strikes by blunt objects are much more severe because of the resistance of water to movement (drag). Your body is not easily knocked out of the way. You are more likely to suffer some crushing and blunt trauma injuries than when struck by the same blunt object at the same impact speed in air. Part of the resistance is due to the water your body has to move out of the way to move. This is often called added mass or virtual mass. In essence, your body behaves as if it had more mass than it really does. This results in higher forces on your body before it is pushed aside. Those higher forces can lead to blunt trauma injuries.

Segments of our body interacting with water are often simulated or physically modeled with cylinders. They are used to represent our arms, legs, trunk, and head as shown in these examples. 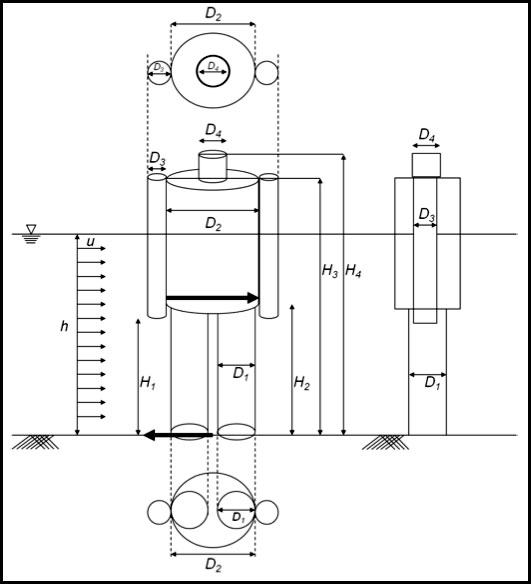 “Tsunami Man” (named by us) above is used in simulations to determine the height and velocity of water in a tsunami needed to sweep a person away (cause them to loose their footing and be swept downstream). He comes from, “An Approach to Design Evacuation Route Through Developing Tsunami Casualty Model” by Muhari, Koshimura, and Imamura. Disaster Control Research Center. Tohoku University, Japan.

BOttle Manakin ABsorber (BOMAB) is used in functional simulations of the scattering of radiation in a human body. BOMAB is a standardized test dummy available from several technology service suppliers. He can also be used in a seated position.

Dacon is used in training on water rescue crews. He is often clothed in a brightly colored jumpsuit. He is manufactured by Dacon in Norway.

While your body weighs less in water, it still has the same mass as on dry land. An underwater impact tries to accelerate your body and the added mass of the water around it.

The bottom line, is major segments of the human body are often modeled as cylinders. A person in the water about to be struck by the leg of an oncoming outboard or stern drive, can be represented as several cylinders connected together. If an upper arm, forearm, lower leg, or upper leg is across the path of the oncoming drive it can be thought of as a cylinder.

For example, CED Technologies used PVC pipe as bones and ballistic gelatin to create cylindrical test specimens for propeller guard testing at SUNY (State University of New York) at Buffalo. While CED test specimens do not directly represent arms or legs, it is obvious their intent was to prepare uniform test specimens that at least in some ways resembled human limbs in size, shape, construction, and impact response.

A cylindrical body part perpendicular to an oncoming drive (outboard or stern drive) leg resists being pushed forward when struck by the leading edge of the drive. As mentioned earlier, in addition to having to accelerate the body part, the drive also has to accelerate a certain amount of water, or “added mass”, that tries to move along with the body part. The amount of fluid that must be accelerated is related to the diameter of the body part and how far it is submerged. The chart below shows those relationships for both horizontal and vertical movement. Note, the chart applies to un-aerated water. Water beneath the boat in front of the drive may be partially aerated and a little easier to push objects around in. 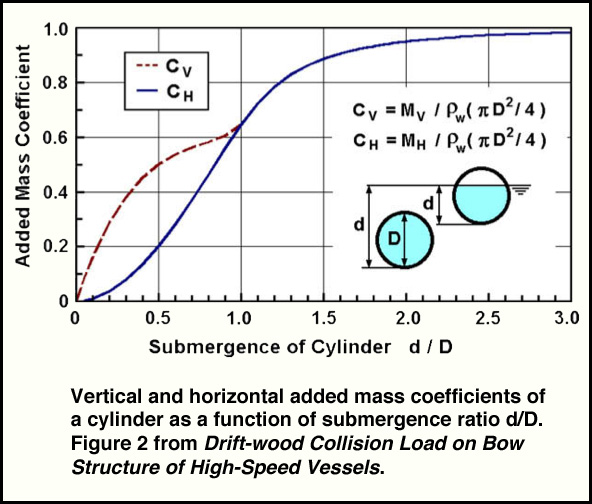 In application, faster impacts basically dent your body (cause your flesh, rib cage, elastic materials to flatten, flex inward, or even your skull to flatten) before your body can be accelerated out of the way. If that happens too fast, your body will sustain blunt trauma injuries.