A petition calling for making the use of kill cords (emergency engine kill switch lanyards) mandatory has now received over 68,000 signatures.

It had been business as usual in the UK for decades. Now, even officials in high positions are calling for change. How did all this attention become focused on boat propeller safety issues?

To visualize the current intense interest in boat kill cords and boat propeller safety we created timeline above. The timeline visually displays how propeller safety accidents and events are happening much more frequently now (late June 2013) than they were in 2010 or 2011.

Why All the Excitement About Propeller Safety Now?

After watching these events from afar, visiting with several parties involved, and studying similar safety movements in other industries, we suggest interest in boat kill cords and propeller safety has skyrocketed now because:

While it is obvious the Milligan accident was the powder keg, other events on the timeline also contributed to the current level of interest in boat kill cords and propeller safety in Great Britain and the UK.

Meanwhile, please consider making a donation to RNLI via Tom and Sam Hutton’s fund raising efforts at Virgin Money Giving. They ran in the London Marathon in April 2013 as part of their fundraising efforts in memory of their younger brother, Charlie Hutton. 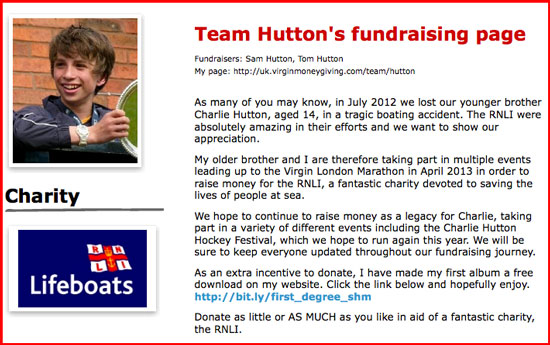