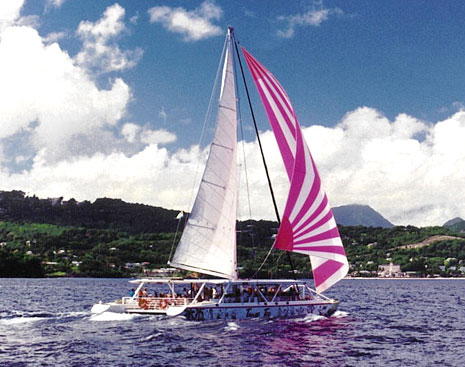 This review of Captain Lawrence O’Neil’s deposition is part of our much larger coverage of the Michael Meyer v. Carnival Cruise Lines et al. case resulting from a catamaran propeller accident on a cruise ship shore excursion.

Captain Lawrence O’Neil was captain of the M/V Tango Too catamaran on the day of Michael Meyer’s incident in St. Lucia.

Lawrence O’Neil lives in downtown Catries, St. Lucia, about ten miles from where his deposition is being taken. He is employed by Sea Spray Cruises as seaman and captain. He captains yacht charter and catamaran cruises. Captain Lawrence started working as a seaman at 18 and is now 56. He captained sloops (regular sailboats) and catamarans for Steven’s Yachts for about 15 years. Stevens was taken over by Sunsail and the worked for them 15 years, ten years as a captain doing deliveries on different islands. They had over 3,000 boats going to different places in the Caribbean.

Sunsail closed in 2000 and he went to work for Sea Spray. He has been there 14 years. When he was out of work, Sea Spray called him because another captain had quit and they needed to pickup a boat in Trinidad. They flew him to Trinidad to sail it back, visited with SunSail about his reputation, and hired him.

He started with smaller catamarans for Sea Spray, like 30 to 40 footers.

He has some certificates for seamanship, coastal navigation, water safety, rescue and survival training with SunSail and a St.Lucia Air and Sea Ports Authority certificate for participating in an April 7, 2009 Safety Awareness Workshop.

Captain Lawrence had CPR training and basic first aid training in PADI school. He also has a St. Lucia captains certificate that is at Sea Spray’s office. He is retrained by PADI every year.

Generally the Sea Spray crews are hired with or provided the same type of first aid and CPR training that Captain Lawrence received.

Captain Lawrence takes the boat out with three or four crew members and the trains them in water rescue. He has one of them jump in, another will jump in with a life vest and a life ring, and he will explain how to hold the person needing rescued. These drills are conducted on a regular basis. They use the life vest and life ring to float the person on the water.

The crew is trained in CPR every year.

Sea Spray has two other captains. He has the most experience at Sea Spray, and as a result every two years he takes each of those catamarans to dry dock in Trinidad, about 178 miles away.

Captain Lawrence has probably captained the Piton trip over a hundred times. He sometimes makes the run twice a day. (pg.62).

Port Authority inspections require them to have 170 life vests and 6 life rings on board. They also require a fire extinguisher and a first aid kit.

Captain Lawrence O’Neil teaches his crew how to use the vessel radio and how to call for emergency assistance.

On the day of the Meyer incident, Lera was his Cox representative, she is very experienced. His crew was Martin James, Wayne, and Glenn. (pg.85).

Lera gave the safety briefing over the PA system as they began to get underway from the dock near the cruise ship.

Lera provides instructions again when they are about 200 yards from the swimming beach.

When asked if Lera gives any instructions about jumping off the vessel, Captain Lawrence said, she does. When asked what those were, he said, “First of all, she will say no jumping. There are two ladders up front, use the stepladder to go down into the water.” (pg.91).

Captain Lawrence said the place they pulled in to swim that day was called Soufriere.

Martin drops the anchor about 80 feet from the bay, he shifts the boat to neutral, and the boat keeps going slowly because of the wind right on the sand. Wayne goes down and ties up the boat to a coconut tree on the island.

When everything was settled down, Captain Lawrence stopped the engines and walked up to the bow to see if everything was okay. While he was up front, he heard a scream. (pg.105).

Captain Lawrence O’Neil turned around and Martin was already in the water. Wayne also went into the water. They put a life vest around Mr. Meyer and got him to shore. Lera went to the beach to assist as O’Neil made some phone calls for an ambulance. He went down to shore and heard Meyer say, “That’s my fault.”

Captain Lawrence thinks the pickup showed up in about 15 minutes.

The only person tending to Mr. Meyer all the time was Lera. Wayne and Martin also helped.

Silverman asked O’Neil if there was a passenger on board that was also a medical professional. He remembers that he helped Mr. Meyer.

Captain Lawrence O’Neil’s company gave him the phone numbers for the Coast Guard tower, port authority, the paramedics, and he had Cox’s numbers in his diary. They are given by Sea Spray to each of the captains.

About 80 yards from shore, Marin opens the gate and throws out the anchor. When he is finished he always puts the rope back. 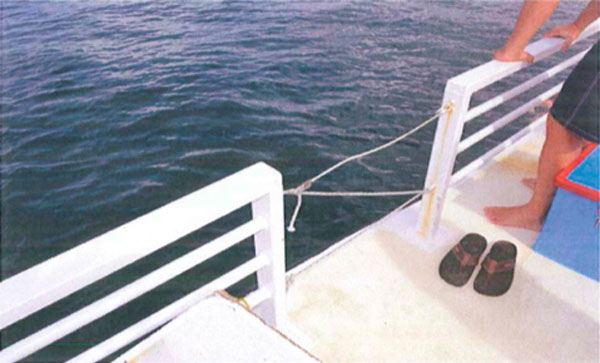 The P&O cruise line, he thinks they have something to do with Royal Caribbean cruise line, will send people on board his catamaran to see everybody has a CPR card, check the first aid, and supervise that everything is in place before the vessel leaves the dock, but Carnival does not do that. (pg.130).

Cross-examination by Mike Eriksen for Plaintiff

Eriksen asked, after the incident with Mr. Meyer, did anyone from Carnival ever ask you to tell them what happened to Mr. Meyer, O’Neil said no.

When questioned about it, Captain Lawrence O’Neil said he had never seen anybody cut so bad by barnacles.

The catamaran had twin John Deer diesel engines. The propellers are about 3 feet underwater.

The throttles were in neutral and the engines were off when Mr. Meyer was injured.

Eriksen asked if Glen had a specific job in the process of bringing the catamaran to the swimming location. Captain Lawrence said Glen ran the bar and served the rum punch. Then O’Neil said we all do the same, we help. But in the offloading, Glen was to go into the water at the front and help people off.

The crew tries to observe the passengers all the time to prevent incidents.

When Eriksen asked if Captain Lawrence saw two other passengers jump before Meyer, he said no.

Eriksen showed Captain Lawrence O’Neil Exhibit 29, Cox’s vessel safety program. He had never seen it before and no one at Cox or Sea Spray ever told him about it.

Captain Lawrence said they always have full insurance. Eriksen asked if he knew if they had the type and amount of insurance required to be in Carnival’s excursion program. He said he did not know. (pgs.188,189).

Chad is another experienced Sea Spray guide like Lera. He gives the same announcements Lera does. O’Neil has been out with both of them. They were both going out at different times before the Meyer incident. After the Meyer incident, the same announcements continued to be made by Lera or Chad, Captain Lawrence said yes. (Eriksen is setting him up for the Jaques video tape of Chad’s safety briefings later in the trial).

Captain Lawrence explained the throttles. The black one is for forward, neutral, reverse. The red one is for engine speed / gas. There are two sets of throttles (one for the port engine and one for the starboard engine) at both control stations. When he wants to turn an engine off, he has to push the stop button and turn a key. If he pressed stop, the propeller would stop instantly, it would not wind down.

Eriksen asked Captain Lawrence if he saw Martin or any other crew member run over and open the engine cover after the scream, he did not. It did not happen. He was looking there.

The boat was serving nonalcoholic beverages on the way to the swimming location.

Captain Lawrence has since visited with Siobhan Beaubrun of Cox & Company about the incident.

Captain Lawrence said they had a defibrillator onboard. (pgs.241,242).

Eriksen asked if the deep cuts in Meyer’s legs could have been caused by a propeller, O’Neill said, “it can’t be the prop that did that.” because everything was off. He thinks it might have been a barnacle.

Captain Lawrence kept saying the propellers were short, 2-inch. (PGIC comment – maybe he means two feet in diameter). He does not recall them being sharp at the edges.

Eriksen asked Captain Lawrence if he could have taken some statements from the passengers after the incident. He said, no, everybody was just quiet.

He does not remember anybody from Cox taking passenger statements when they made it back to the pier.

Captain Lawrence agreed that all the catamaran trips he made to the Pitons over the last 14 years were for Cox and every single one of them had a Cox representative onboard as a tour guide. (Again, Eriksen is setting him up for the Jaques excursion questions at the trial). (pg.256).

Redirect by Noah Silverman for Cox

Captain Lawrence O’Neil said Lera and Chad give slightly different types of announcements. They each have a different view, but they both talk about safety.

They talked about Cox’s Watercraft Standards Policy, that Captain Lawrence had not previously seen. Silverman said Cox would be providing it to Sea Spray and Sea Spray will tell Captain Lawrence he needs to go according to the rules of Cox and Company.

Silverman asked Captain Lawrence if Cox’s rules were similar to the rules Sea Spray has for the operation of their catamarans and he said yes. (pg.261).

O’Neil cooperated with the police following the incident. He does not know if someone from Cox or Sea Spray spoke with the police later to determine the outcome of their investigation.

An investigator asked him if Sea Spray leaves it up to the passengers to learn what the safety instructions and rules are. O’Neil said the captain and crew learn about safety, then instruct the passengers.

Captain Lawrence believes he and his crew did nothing wrong that day.

Captain Lawrence said Meyer did not want to wait for the safety briefing or for the signal to leave the vessel. He did not follow the instructions. O’Neil later heard him say, “It is my fault.”

Captain Lawrence recalls no other significant injuries on their catamarans.

Further Redirect by Oldershaw for Carnival

Captain Lawrence thinks Meyer did not follow the instructions because he was not listening.

Eriksen asked Captain Lawrence O’Neil if he had became more careful since the incident and he said yes, we are more observant, like every minute we are observing everything that is going on on the boat.

Earlier, Silverman asked a question about idle speed and O’Neil said it was 6 rpm’s. Eriksen referenced that question to make sure the answer was 6 rpm’s and Captain Lawrence agreed. (PGIC comment – we suspect he means 600 rpm).

Eriksen asked him if the propeller were turning at 6 rpm’s, he said, no the propellers do not turn at idle. When asked how many rpm’s were needed for the propeller to start to turn, Captain Lawrence said it had to be in gear and turning about 10 to 20 rpm’s (PGIC comment – probably really means 1,000 to 2,000 engine rpm).