Motor Boat & Yachting (MBY)published a great investigative article on boat kill switches in the wake of the Milligan family accident in the UK. The article was published in their September 2013 issue, and supported with numerous online materials.

The article titled, The Truth About Kill Cords is accompanied by results of a several question survey that had been presenting to several leading boating organizations and marine companies operating in the U.K. In addition, some videos of testing safety devices are included as well as a video discussing the issue in general. 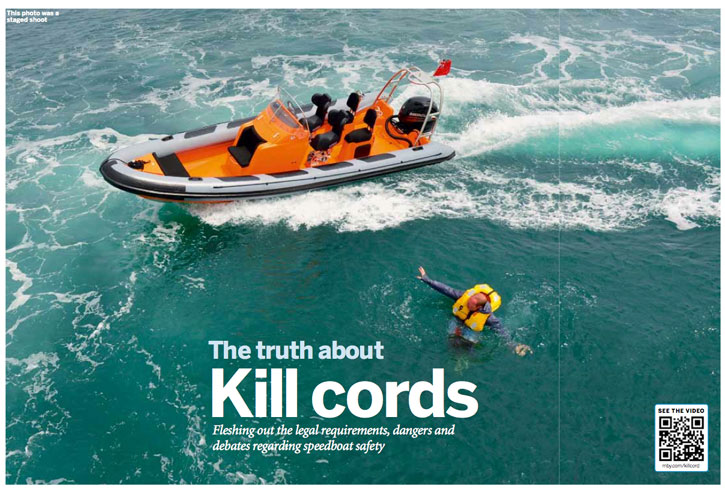 We found it interesting MBY even included a QR Code in the feature image of the article in the magazine that leads viewers directly to one of their videos.

The article includes several ideas offered by readers to help prevent similar accidents. Among them are:

All in all, its a tremendous work. Well done Motor Boat & Yachting!

We cannot imagine a similar coverage in the U.S. The magazines here are sponsored by boating companies and they do not want to be reading about accidents or safety devices. They want to see fun boating activities and reviews showering their products with accolades.

MBY was able to get responses to those questions (or at least some comments) from British Marine Federation, RNLI, RYA, Scorpion RIBs, Cobra RIBs, Pascoe International, Williams Performance Tenders, Suzuki Marine, Mercury Marine, and Honda Marine. While a few more candidates are absent from the list of responses, it is amazing that MBY was able to acquire the responses they did.

Links to each firm or organization’s responses are available near the bottom of Motor Boat’s article.

Several firms answered many to all of the questions. A few firms and organizations used the opportunity to ignore the questions and repeat their already established messages in this area.

In general, we were shocked that MBY was able to illicit so many industry responses. MBY did a great job, and thanks to those who responded as well.

Among the more obvious voices missing among the responses were Yamaha and the better known UK propeller safety advocates like Heddon Johnson (the article did include a passing reference to his son’s fatal accident), Cian Williams and his mother, Maurice Abrahams, and Charlie Hutton’s father. Also missing was reference to the Isle of Wight’s Coroner’s instructions to the leisure boating industry during the Cornoner’s Inquest into the death of Charlie Hutton. Also missing was Propeller Solutions, local UK manufacturer of propeller guards seen as a backup to kill switches in many situations.

Again, congratulations to Motor Boat and Yachting for putting together a tremendous series of materials on kill cords, kill switch lanyards, and alternatives.