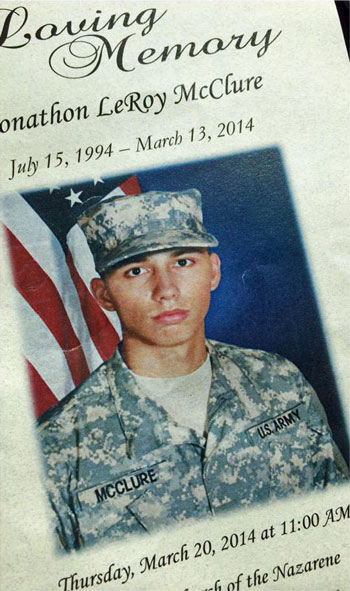 Jonathon McClure, 19, and Sheldon Mashburn were in a bass boat on Claremore Lake (Oklahoma) 13 March 2014.

per the accident report filed by the State of Oklahoma with the U.S. Coast Guard (BARD 2014-OK-0002) the two men were fishing and getting ready to change locations on the lake because the wind was getting stronger. They were going about 30 mph when the operator (Mashburn) let go of the steering wheel with one hand to grab for something in the boat. The boat turned hard to right and both young men were ejected. The operator reported he was sinking, but was able to get his boots off. When he looked back to where he last saw the passenger (McClure) he did not see him anymore. The operated treaded water till another boat picked him up. The boat involved in the accident continued to circle in the “Circle of Death” until it ran out of gas.

Jonathon McClure’s body was recovered later the same day by Grand River Dam Authority using sides canning sonar on the bottom in about 11 feet of water.

The boat was a 15 foot 1990 Thunderbolt 155 fiberglass bass boat powered by an 88 horsepower Evinrude outboard motor. In addition to the fatality, Sheldon Mashburn was reported as being injured beyond first aid.

Initial reports apparently incorrectly indicated the outboard motor hit a stump out in the middle of the small lake, the boat jerked to the right, they were both ejected, and the bass boat began spinning.

Historically, we have limited our coverage to propeller accidents. We have not yet seen that either of these young men were struck by the propeller, but we have come to recognize that runaway bass boats spinning in the Circle of Death hit some and miss some. It is pretty much a crap shoot. Some people safely swim away or are plucked from danger before they are struck, while others may be struck repeatedly and/or drown. Therefore we decided to use this local accident (about 100 miles from us) to help focus some attention on the problem.

Authorities had to wait for the circling bass boat to run out of gas before beginning to search for Jonathon McClure’s body. The boat was running at wide open throttle. NewsOnline6 shot some great video of the circling boat from their helicopter (Osage SkyNews 6).

Sheldon Mashburn was rescued by a boater that came around a corner, saw the unmanned circling boat, and him in the water. Mashburn was taken to a Claremore hospital with non-critical injuries.

Several agencies joined the search and rescue operation, including Grand River Dam Authority (GRDA). GRDA brought a small boat with side scanning sonar. About two and a half hours of searching later (one report says one hour later), a dive team found the body of Jonathan McClure near where they lost control of the boat on bottom in about 11 feet of water. The sonar operator thought they would be successful that evening because they had a good place to start. He was glad they were able to bring some closure to the family.

Authorities said Johnathon McClure was not wearing a life jacket, and the fact the boat circled, indicates the boat operator did not have the kill switch clipped on.

In a News6 interview with Derek Cotner, Service Manager at Brad’s Boats Sales, Derek said, new boats have another feature – a foot pedal the driver has to push to keep the throttle above idle.

Jonathon McClure, a graduate of Sequoyah High School, was home on leave from the military / Army.

NewsOn6 ran a great story on his life. They included some footage from 19 years ago when the network covered his birth, as he had been born in a flood, the flood of July 1994. His mother agreed to do the story because NewsOn6 had been there at the start of his life, and at the end.

Her son was fishing with a longtime friend. Jonathon’s parents were very proud of their son and recently saw him for the first time in his Army Greens. He was a helicopter mechanic out of Fort Carson, Colorado and had been serving since he graduated high school.

His mother had tried to be prepared for the phone call all military families fear, but got the call when he had been home for less than a week. She finds comfort that he was home on the water with a friend.

Jonny McClure is described as loving the outdoors, loving the water, and loving life. Bull Riding was among his favorite things, he rode bulls at a young age. His funeral was at 11 am Thursday morning 20 March, 2014 at the Church of the Nazarene in Claremore. Jonny was buried by his grandfather in Rose Hill Cemetery in Tulsa.

Jonathon McClure’s funeral was wrapped with full military honors including a 21 gun salute, the folding and presentation of the flag, and taps. Over 200 people attended including many former and present servicemen and women.

NewOn6’s spinning boat video and basics of the accident were picked up by several bass fishing forums and Field & Stream. Many used the opportunity to encourage everybody to attach kill switch lanyards and to wear life jackets.

We would like to especially thank NewsOn6 in Tulsa for the great coverage of the accident they provided and for following up with his family later, as well as the many other news outlets that covered the story. Plus thanks to GRDA for aiding in finding the body. Many of the searches go on for days. GRDA’s operator and side sonar equipment were able to rapidly bring the search to a conclusion.

We also thank Claremore Chapter 44 DAV, the Patriot Guards, and the American Veterans Motorcycle Club for holding the American Flag to lead and close his funeral during their 4.5 hour presence on the flagline. The Patriot Guards and riders attended to ensure no interruption of the services by groups trying to disrupt military funerals.

We recently put together a list of over 100 similar accidents. See our post titled, Bass Boat Operators Ejected Overboard Underway in Open Water.

Several of those accidents involve Oklahoman’s including the October 1973 fatality of Vernon Fowlkes (a maker of fishing gear from Tulsa) in the 3rd Bassmaster Classic tournament in South Carolina and the February 1982 Lake Texoma father-son fatality of Jim Evans and his son Jimmy.

Vernon Fowlkes’ accident led to the mandatory use of kill switches in BASS tournaments.

Its sad to keep reading of similar accidents claiming the lives of Oklahoman’s forty years later.

It is widely know that kill switch lanyards are not normally attached. We encourage the boating industry to specifically address this problem (Circle of Death) in bass boats with the existing solutions (power steering, foot throttles with toe clips, virtual lanyards, portable controllers (like CoastKey), etc.), while continuing to develop more solutions such as presence detection and the Circle of Death Prevention Invention we first proposed back in 2007.

While we do not know if either of these young men was stuck by the circling boat or not, if the boat was quickly stopped after their ejection, Jonathon McClure might have been able to return to the boat. If not, the search for him could have begun immediately with some possibility of resuscitating Jonathan.

Spelling – the young man’s name is properly spelled as Jonathon McClure. As news reports and media coverage spelled it many other ways (Johnathan, Johnathon, Jonathan), and he went by Jonny, we included some of those spellings above.