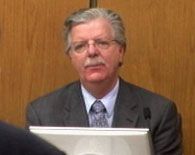 O’Sullivan picked up from yesterday with inadvertent deployment of the guard.

In the real world how could one happen? The control system has to know how fast the boat is going to know when to raise the guard. A speed sensor relies on properties of a pitot tube.

Taylor raised his ink pen and said, “Kinda the size of this pen and there’s a little hole in it.”

Taylor is still coming across smooth. So smooth in fact that ink pen analogy may have been planned in advance.

Taylor said if seaweed or debris gets in the hole, or a baggie covers it, the tube thinks “no pressure” and drops the guard.

If the hole gets blocked, the guard will lower. It will be a reliability issue.

Most people don’t care if their speedometer is not working.

O’Sullivan, yesterday there was a question about hydraulics?

Taylor answering the question, yes the boat has a hydraulic trim system on it (A juror had asked is the boat had other hydraulic systems on it). Earlier Taylor did not think the trim was hydraulic. He thought it was manual trim.

Taylor said the trim system has a little pump that runs about 300 psi. The power steering system runs about 100 psi. The Paulo propeller guard is a 2500 psi system.

O’Sullivan, is that why it is intended to have its own hydraulic system? Yes.

I would guessed much higher pressures in the trim system, and even in the steering system too. We will check on them later.

To power a boat backup if the guard drops will take more power. It comes from horsepower and torque.

Taylor said as you go faster and faster, a ten percent increase in speed is a power function relationship curve. The exponent is 2.5. In this speed range, to go from 36 to 40 mph takes 30 percent more horsepower. 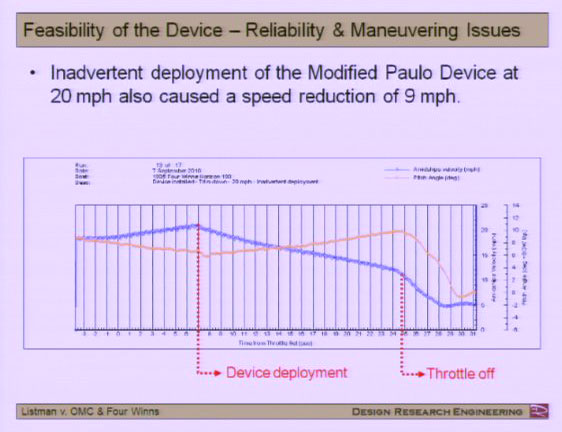 In one test an inadvertent deployment slowed the boat from about 20 mph to 10 mph.

O’Sullivan, Is this a device you could chance off the coast? It will take more fuel and time to come back if the guard is down.

Prototype guard 2 surged some in an inadvertent deployment test. It was making a turn. Blue is the steering wheel position, you can see it was skipping, bouncing, yawing in a turn. 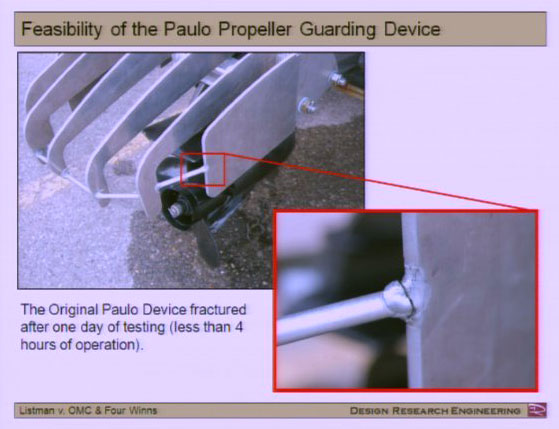 Taylor, A typical ski boat has a lifetime design goal of about 2,000 hours. Some manufacturers have higher targets. This one failed in four hours in one day.

In the down position, the guard is pretty much like a rake. It will collect weeds and be a nuisance. An open propeller tends to not collect weeds. This could be a real annoyance in some cases.

Taylor said that once when he was testing a different guard (nothing to do with this case) he had to stop and clean it.

The Paulo guard would have to have a manual override which would make that easier (cleaning it), but as soon as boaters learn the boat goes faster with it up you can imagine what the average boater will do.

The boat tends to skip around turns in turns when heavily loaded. More stuff is near the water with the guard up in hard turns. It is just another operating characteristic that may be unacceptable to some people.

When the boat first goes up on plane, the nose is up for a few seconds. It is longer than those just a few seconds with a guard at full throttle, and longer still at less throttle.

O’Sullivan, Would this boat need an experienced driver? I think all drivers should be experienced.

Note- they spent a while in objections before creating the question above about the plume. We most certainly did not get it in verbatim. We just blogged the gist of it.

It seemed like the defense was willing to give this one (the plume problem) up from their list and thought they could earn a little jury credit for doing so.
Its like they mention it countless times, then say, by the way we are so fair minded we will give that one up (but only after it is riveted in your brain)

O’Sullivan, Were you ever able to solve the erratic problems in reverse? The phenomena of why it screws up in reverse steering would take a lot of study. If the average guy raises the guard to steer the correct way, it defeats the purpose of the guard.

They showed a guard clanging up and down out in the air as it opened and closed.

I guess all that stuff we heard about being in air or water makes a lot of difference and you need to test in the proper medium does not apply to guards? If they did that in water, the guard “bucket” would be cushioned by the water.

The guard offers an unintended consequence, being pinched by the guard.

Talked some more about Taylor’s experience, then Taylor said you can almost design for a specific scenario and solve that out, but unintended consequences create problems in some other scenario.

The notion of entrapment and interacting with the propeller is its big downside.

His fear is that if we experiment with this kind of design on the public we will move those that would have been injured into the fatality category.

Taylor thinks that is why the Coast Guard has never mandated their use, the unintended consequences.

Not every all unintended consequences are negative. Propeller guards make people more aware of the propeller and its location and of the danger of a rotating propeller. If they move to a boat with no guard from one with a guard, they will definitely be more aware of the prop. We hear people employing propeller safety devices feel good about their safety efforts and apply other safety measures as well.

There could be many other “good” unintended consequences.