“The Flapper”: A Propeller Guard Design

Note: This page was originally written 10 July 2007 and was posted about three and a half years later on 21 January 2011. We can verify the date of the original writing. No changes have been made below this paragraph (other than updating links, source code, and correcting spelling errors). We are posting it here as additional prior art on Flapper type guards. At the time of its writing we were considering moving our Flapper guard to a separate page, but later elected to leave it on our  <2011 Propeller Safety Technologies page. We were considering moving it and making a more formal declaration of the invention after some other concepts we posted were later patented by others.

If you have or become aware of any technologies that might be useful in reducing propeller injuries, or have any comments about this page, please contact us.

“The Flapper” is a conventional propeller guard, except the screen to the rear is hinged at the top and flaps up when underway. It has a small planning “flap” that points nearly straight down when the boat is at rest or backing up. When boat gets underway forward the resistance of water rushing by flap and screen causes it to swing open and ride parallel to the surface of the water or even at an upward angle. Once the boat slows, the weight of the screen and flap pull the screen down causing it to cover the rear of the propeller. 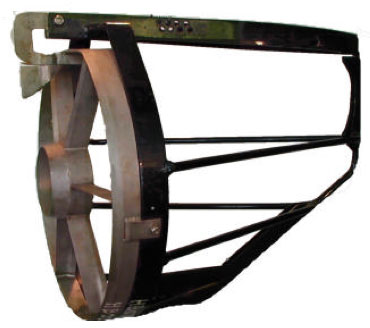 PropBuddy’s propeller guard is shown at the left with their “Thrustor” (lighter colored wagon wheel shape to the rear) installed. Imagine the “thrustor” just being a screen and instead of being bolted to the perimeter of the guard, it pivots on the bolt at the top (the silver colored bolt at the rear end of the harness that attaches the guard above the anticavitation plate). The screen (previously the thrustor) pivots and swings up when a flap extending below it is pushed back and up by water flowing by.

The design we propose appears to be especially applicable to houseboats, pontoon boats, and other slow moving vessels powered by outboards or stern dives. Some of these boats have a lower risk of striking people by running over them (they go so slow some people can get out of the way or shout to attract attention before they are hit, plus have better forward visibility), and a higher risk of hitting people already in the water near the stern. These boats often have poor rearward visibility and in the absence of a good lookout, an operator can start the engines and pull people into the propellers. Several of these accidents have occurred when backing off beaches, when “rafted up”, and in open water after stopped for a swim. Swimmers near the rear of the boat and those or on or approaching a swim ladder are at risk.

A large percentage of the drag and possible handling issues at higher speeds of a conventional propeller guard is due to the screen over the rear of the propeller. We propose swinging that rear screen up when underway.

A propeller guard design is composed of four steps.

One combination that seems very logical for houseboats and pontoon boats is a duct type guard mounted similar to a PropBuddy. This design is very strong and could be used to mount a duct a few inches long around the outside diameter of the propeller that extends a little to the rear. The swinging screen could then just flap down against this duct when in reverse, stationary, or moving forward at very slow speeds. It swings down due to its weight. Once underway at a few miles an hour the “flap” cause the screen to plane up to the surface and extend out behind the boat.

The screen would be painted or otherwise colored a bright safety color (orange, yellow, red?) to increase its visibility when trailing the boat.

Note – even greater efficiencies might be achieved by tuning the throat of the duct to a variable diameter based on linear position along the duct (Kort Nozzle). Which might also result in similar performance with less power (fuel savings), especially at slower speeds.

A Flapper Propeller Guard for Houseboats and Pontoon Boats

These vessels inspired the design. A lengthy duct held around the propeller using a strong structure off the leading edge of the drive similar to that used by PropBuddy, would result in a strong configuration, that might be more resistant debris and striking obstacles than a screen type design. braces to the front provide human and manatee protection, while the “Flapper” provides protection to the rear when stopped, in reverse, or when underway forward at very low speeds.

More braces to the front than normally used by PropBuddy can be used due to the slow operational speeds.

Other configurations as briefly identified in the Designing a Flapper Propeller Guard section above might work best on other vessels. For example ski and wakeboard boats might elect to add a screen in the forward direction in addition to the mounting rods. They might also opt for a screen around the perimeter of the propeller instead of a duct due to higher speeds.

Early History of “The Flapper”

On October 13th, 2006 I posted the basic idea on our Possible Propeller Guard / Propeller Safety Technologies page. Then we followed it up with a brief comment there on 9 January 2007. Since then I have been refining the approach into the materials now posted on this page.