RingProp / Ring Prop is no longer in business. The information below is provided for informational and historical purposes.

We were just and observer, but it appeared they had too many executives and people devoted to raising money and not enough people devoted to developing the technology. While it takes a lot of money to commercialize a special propeller, you can’t spend all the money you raise to fuel even more fund raising and the salaries of your executives, you need to be making some technical progress and producing some products.

Below we provide an image of one of the RingProp sales flyers and a history of the efforts to develop this propeller. 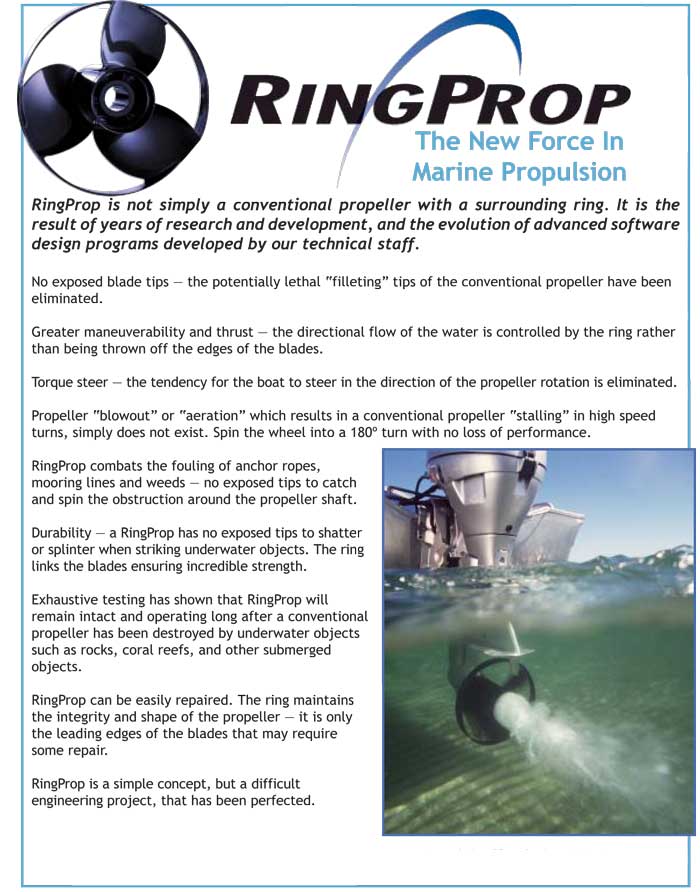 This “ringed” propeller probably received more press in 2005 than any other protection method. RingProp claims its propellers are safer because they reduce the probability of direct contact with the sharp edges of the blade. Their web site, RingProp.com, covers the current status of their product. RingProp’s U.S. media representative, Home Port Marine, along with their growing success in the marketplace has kept them in the public eye. In the Spring/Summer 2006 they announced some financial difficulties and their search for a commercial partner.

RingProp PLC is a U.K company formed in 2002 to commercialize a “ringed” propeller invented in Australia about 20 years ago. They are located in the Gosport Haslar Marine Technology Park (operated by Solent Enterprises Hub, an investment firm specializing in developing technologies). RingProp stock was publicly traded on the AIM (Alternative Investment Market), but trading was suspended 21 Jun 2006.

Our coverage here, is from a historical perspective, in part to assist others who may find themselves on a similar quest to commercialize propeller safety products. RingProp’s path to market has been long and tortuous, but they showed it could be done. The following history has been pieced together from public documents, it may contain some errors.

The design was invented by Norman Hurley in Australia prior to 1986.

In the 1980’s the inventors tried to market the propeller in Australia as the “Stealth Propeller”.

In 1990 the propeller was tested by the Maritime Institute of the Netherlands (MARIN).

May 1991, Michael Edgley Holdings reported they received a letter of intent from a U.S. marine distributor with annual sales of over $4 billion U.S. dollars. The letter claims the propeller is capable of capturing at least 5 percent of the U.S. propeller market within a year.

7 May 1995 Stealth Propeller was advertised in the Atlanta Constitution paper for $110 and up.

10 July 1995 Stealth Propulsion International sent a letter describing their technology to the U.S. Coast Guard in response to a request for public comments when propeller guard regulations on houseboats and other displacement boats were being considered.

Nov 1996 article reports Wendell Minnick was recently named chairman and CEO of Stealth Propulsion International, Ltd. of La Jolla, CA. He has prior experience with marine hardware and sailboat manufacturing in Asia.

1998 Curtin University of Technology in Australia worked on propeller design and performance prediction for the propeller.

2000 Don Hoult, the Australian mining engineer and entrepreneur who eventually put the RingProp deal together (found a group to advance the technology and take it public) learned of the propeller.

2001/2002 RingProp is formed, issues stock to MarTek and Stealth Propulsion for their intellectual property rights and prepares for a initial public offering of stock (IPO) on the AIM.

27 Mar 2002 RingProp reports it is close to receiving an order for 714 to 1,000 units from the Australian Defense Ministry after two years of testing. The props will be used on 25 and 40 HP Mercury Outboards. They will be 10 inches and 12 inches in diameter.

Nov 2002 “Ringing the Changes” article appears in the November 2002 issue of Marine Engineers Review. It discusses some of the findings by Dr. Ian W. Dand of BMT SeaTech Ltd. who wrote the engineering review in the RingProp stock prospectus.

2002-2003 found them jumping from plastic/composite to aluminum construction, changing their target horsepower market, and failing to reach sales projections.

31 July 2003 article reveals they reached a joint agreement with JL French to produce the molds and Johnny Townsend, chairman of RingProp, will step down to pursue other interests.

9 Dec 2003 article reports three designs have been delivered to JL French and 17 more will be delivered progressively during January and February for prototyping and eventual tooling and production.

13 Nov 2004 A battle for control of the company broke out between Don Hoult (the largest shareholder and former Chief Executive) and the rest of the board. He was ousted last month, but has called a meeting to vote himself back in and remove the board members. All resolutions proposed by Mr. Hoult later failed at the meeting on 9 December.

6 July 2005 RingProp announced they acquired a “further patent application for ringed propeller technology from Saturn Marine Pty Ltd.” and in the same transaction, they purchased tooling for manufacturing ringed propellers in stainless steel and estimate the annual global market for stainless props at 400,000 units.

9 March 2006 RingProp announced a refocus of R&D and marketing activities to reduce overhead. The state the reduced range of products now available and dealer commitments will restrict any meaningful sales in 2006.

11 April 2006 RingProp announces J.L. French the supplier of their aluminum propellers went into administration on 10 Feb 2006.

21 June 2006 RingProp announces they will spend the next five weeks looking for a commercial partner and will immediately suspend trading of their stock on the London AIM market.

RingProp’s more recent history was covered on their web site (portions still viewable at archive.org). The ring propeller design took many years to finally reach the U.S. market, generated considerable interest, and then fell away. Hopefully future propeller injury avoidance products will have an easier and more successful path to market.

June 2009 – Mark Chapple co-presents A Viable Approach to Propeller Safety for Small Craft: Ringed Propellers at the First International Symposium on Marine Propulsors in Trondheim Norway. It looks like the effort to commercialize the ringed propeller may still be alive. Mr. Chapple lists his employer as RingProp Marine Ltd. In early 2011, it looks like a OceanAir Marine in the U.K. may be tied to the effort.