As discussed on our Propeller Accident Statistics page, the U.S. Coast Guard collects recreational boating accident data and logs it their Boating Accident Report Database (BARD). Accidents are logged as a sequence of up to three events, such as: 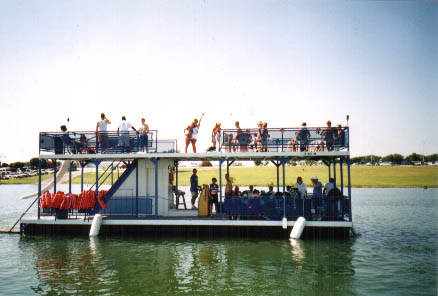 A church group of approximately 75 teenagers came to Lewisville Lake near Dallas on Friday 29 June 2001 for a recreational activity. Between 4 and 5 pm, about 65 of them were on a 46 foot
rented party boat from Just for Fun Watercraft Rental. The boat was essentially a houseboat without walls, a large two story vessel with a water slide at the rear. The vessel shown is an example of the boat and may actually be the vessel that was involved.

An employee of Just for Fun Watercraft was operating the boat about a quarter of a mile from Pier 121 Marina. The boat was at rest in the water and the youth were enjoying the day and
water activities. Preparations were being made to get underway, the motor was started and a 12 or 13 year old boy was very seriously injured in the water at the rear of the vessel.

“A 13-year-old boy was in stable condition Friday after being seriously injured when he got caught under the propeller of a 46-foot party boat in Lewisville Lake during a church
youth group outing.” …

“The boy suffered 14 lacerations on his back from his neck down, said Denton County Sheriff’s Deputy Elliot Robertson” ….

“Mr. Kim (an employee of Just for Fun Watercraft Rental) said the driver didn’t realize the boy was in the water when he started the motor.” …

“When the driver started the boat, he saw the water splash and put it in neutral, Mr. Vanderroest (a Game Warden) said. He then heard screams and saw blood in the water.” …

“Paramedics tended to the boy until a CareFlite helicopter arrived about 5:15 p.m. to take him to Baylor University Medical Center in Dallas, officials said.”

“I didn’t think he would make it because he was cut up pretty bad,” he (Deputy Robertson) said.”

“A 12-year old Dallas boy was in serious condition Friday night at Baylor University Medical Center in Dallas after he was run over by a boat on Lewisville Lake, officials said.

The boy, whose name was not released, apparently jumped off the second floor of a large boat. After landing in the water, he was struck repeatedly by the boat propellers, Lewisville police said.” …

“Interview – Ron Vanderroest Coast says everyone was in the boat, driver started the boat and then heard a splash and shut the boat off and one of the kids jumped into the water and was struck
by the propeller.” …

Boating Accident. A Boy Who Fell From a Boat on a Church Group Outing is in Critical Condition
KTVT-TV (Dallas television station)
Channel 11 News at Ten
Friday 29 June 2001

“He fell from the boat and then got caught in the propeller.”

“Visual – … Lake Lewisville where a teen fell from a boat and was slashed by the propeller.”

The Actual Coast Guard BARD Database Entry for the Accident

Data for each accident is linked together in the four tables by the “Accident Number” which occurs in each record.

As mentioned on our Propeller Accident Statistics page, each accident is logged as a sequence of three events. In this case they logged the accident as:

Note event 3 was left blank and none of the events list being struck by the propeller.

A more complete listing of the U.S. Coast Guard BARD data tables for this accident is below:

Discussion of the BARD Record Above

Most notable, in addition to the sequence of entries for “Accident Type” discussed earlier, is the Injury Table which lists the Secondary Injury as “Severe prop strikes” however the Injury Table
entry specifically for Prop Injury is “No”. The lack of a “Yes” in that entry OR a listing of Struck by Propeller in any one of the “Accident Type” entries in the Primary Table means this accident
does not show on ANY reports of the database to identify or count propeller injuries. It does not show in the annual statistics for propeller injuries and is not usable in local or regional studies of
propeller accidents or propeller accident prevention programs. More on that in a moment.

It also seems unusual that no entry was made for the “Body of Water” (Lewisville Lake), no entries were made for the cause of the accident, no entry was made for the involvement of alcohol (one suspects no alcohol on a church outing), the victim was listed as NOT being admitted to the hospital (his injuries sound like he would have been admitted to the hospital – in fact he was flown by helicopter to the hospital and the television report said he was in critical condition), and no entries are made in the Vessel Table for the Activity (getting underway) or Speed (< 5 mph in reverse). The acquisition and status of these variables is very important in evaluating potential approaches to reducing propeller injuries.

We may be wrong, but with six independent media reports calling the accident a propeller injury, the first one citing a Deputy County Sheriff and a Game Warden, while the second one cited Lewisville police we are pretty confident it is a propeller injury. If that is not enough – the actual BARD database Injury Table lists his Secondary Injury as “Severe prop strikes”.

Why is it so important to capture this data? History repeats itself. If you don’t believe that, read the news reports concerning the death of Mary Maiella, age 23, who was going down a water slide on a similar party boat in a similar situation on Lake Travis near Austin on 1 July 2006. The rental boat she was killed on was also operated by Just for Fun. The boat was just started and backing up, she was stuck and killed by the propeller.

Any propeller safety study of these types of vessels using the BARD data in advance of the 2006 accident would not have included the 2001 accident because it is not classified as a propeller accident in any of the “Accident Type” entries and not in the “Prop Injury” column.

We need more accurate records of propeller accidents so we can respond to and prevent similar accidents.

How Many More Are There?

We later identified several houseboat propeller accidents that have been misclassified in BARD. Details are in our Report on the Rejection of a Proposed Houseboat Propeller Safety Regulation.

Once again, we are not throwing rocks at the BARD database, and especially not at the U.S. Coast Guard. They do the best they can with the manpower and finances allotted to them. The Coast Guard is forced to rely on individual boaters and their states to report boating accidents and file the BARD reports. We greatly appreciate the U.S Coast Guard’s efforts in this area and wish them the best.

If you have any comments or questions, or feedback about the site, please contact us.