Boating Industry Speaks Out on the Futility of Propeller Guards

Over the last three decades, the industry has repeatedly declared propeller guards do not work, cannot work, and will never work. A collection of some of those statements is below.

If anyone even ever slightly leaves the door open, they immediately try to close it, and in the very rare instances when an industry representative makes a statement about the usefulness of guards, they are quickly reprimanded and brought back into the fold. This page also covers a few of those instances.

After a series of local propeller accidents and a fatal propeller accident involving a young girl, the Orlando Sentinel (Florida) interviewed several parties on propeller guards and published a story on 7 September 1987 titled, Propellers Are a Deadly Problem. Among those interviewed was David Beach, Manager of Engineering Services for the National Marine Manufacturers Association.

“Technically, this has been kicked around for the better part of three decades. The problem is, that producing a workable guard is a rather complicated thing. All proposed so far have deleterious effects.”

In response to propeller accidents in general, Mr. Beach said:

“Admittedly, they are kind of gory and gruesome and they command a certain amount of attention, but in the overall picture, they’re no worse than what happens when somebody rolls a rock down a hill and hits a bus in Colorado.”

Mr. Beach finished by citing USCG Event 1 only propeller fatality statistics for 1986 (16 deaths) and falsely claimed they represented all deaths that year. Event 1 statistics (first event of the accident sequence) only represent a small fraction of USCG reported propeller accidents or fatalities in a given year.

In March 2002, NMMA responded to a USCG request for public comment on a proposed propeller safety regulation for houseboats with call to arms encouraging its members to write USCG and expound the list of points they presented.

CHICAGO, March 22, 2002 – – The United States Coast Guard has extended the deadline for submitting comment on a proposal regarding mandatory propeller protection devices on houseboats until May. National Marine Manufacturers Association (NMMA) is taking advantage of the extra time to issue an action alert to members of the recreational marine industry to voice their objections to the proposal.

The proposal requires owners who lease, rent, or charter non-planing recreational houseboats to install either a jet drive system, propeller guards or three combined measures. The three combined measures include installing swim ladder interlocks, a clear visibility aft device, and an ignition cut-off switch. Owners of non-planing, non-rental houseboats would be required to install the interlocks and the clear visibility aft device, but not the ignition cutoff switch.

John Mcknight, NMMA director of Environmental & Safety Compliance, says that this proposal is not only about houseboats, but about engines as well, and in the future it could spread to all types of boats.

“NMMA clearly supports steps to reduce boating accidents and fatalities, but this proposal raises the question as to whether in this case the risk justifies the cost of regulation,” says Mcknight. McKnight points to statistics that the USCG bases the need for this rule on. From 1990 to 1999, there were a total of 18 propeller-related injuries and two deaths. The proposal estimates the total cost to rental operations to upgrade each boat would be $440; costs NMMA believes are underestimated.

NMMA is making it easy for the industry to voice their objections. A sample letter opposing the proposal can be accessed on NMMA’s website at www.nmma.org. On the site, click on “Making Waves” and follow the steps to send an industry letter.

“Based on the volume of responses the USCG has currently received, the recreational marine industry is outnumbered five to one by those in favor of propeller protection devices. The industry has to make their voice heard before it’s too late,” says Kelly Bobek, NMMA director of Federal Government Relations.

For more information on the prop guard proposal, contact McKnight at (202) 721-1604; jmcknight@nmma.org.

John McKnight, NMMA, comments are in this quote from the post:

In the past, there had been several “snake oil salesmen designing guards in their garage,” McKnight said. “In litigation, the question would be asked, ‘Why wasn’t one of these put on?’ Though we don’t endorse the document, we can live with it.”

NBSAC is a U.S. Coast Guard Advisory Group that is sometimes dominated by industry representatives.

In 1988, in response to a number of propeller accidents, a NBSAC subcommittee was formed to investigate the feasibility of propeller guards. They issued a final report in 1989. It was strongly opposed to the use of propeller guards as seen in the quote below from page 24 of the report.

“Although the controversy which currently surrounds the issue of propeller guarding is, by its very nature, highly emotional and has attracted a great deal of publicity, there are no indications that there is a generic or universal solution currently available or foreseeable in the future. The boating public must not be misled into thinking there is a “safe” device which would eliminate or significantly reduce such injuries or fatalities.”

OMC put the following statements in the installation kit with their small ring guard years ago, to indicate it was not for protecting people. 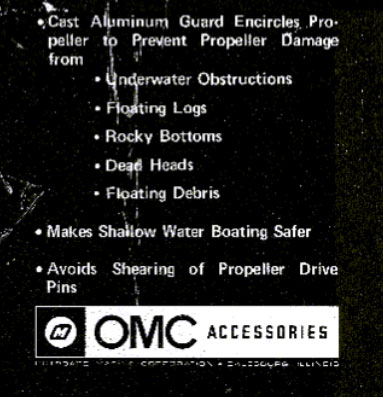 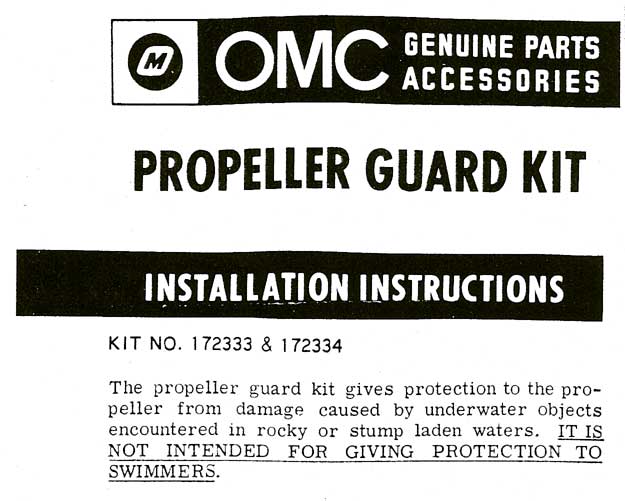 Rouge Statements About Propeller Guards Reeled Back In

OMC Australia saw the market for guards on the local surf saving life boats. OMC was already selling the ring guard for small outboards under the guise of protecting the propeller. OMC Australia teamed with a local manufacturer to build a companion “face mask” for the ring and started selling the combo guards like hot cakes. Then they made the mistake of bragging about their invention to the folks back in the USA in a faxed letter dated September 19, 1977.

“This combination of the 2 guards when bolted together has proven extremely effective in preventing injuries to swimmers. …. For normal situations these guards will prevent limbs being struck by the propeller (referring to OMC’s ring). Unusual circumstances could see feet or hands still being hurt and hence the “Face Mask” addition.”

Upon receipt of the faxed letter, OMC’s attorney, Alex Marconi, immediately faxed OMC Australia the marching orders (the position statement on guards). OMC had already sent it once before. OMC Australia responded the same date (September 19, 1977) with the faxed comments below:

“Dear Alex, Many thanks for your reminder note on the propeller guard position, it was already on my desk when I returned in early August.”

And amazingly, the following statement about selling their small outboards to the surf saving market in Australia slipped into the Winter 1996 issue of Power (OMC’s corporate magazine) almost two decades after the first debacle,

“The modifications include …. and a stainless-steel propeller “mask” which prevents prop related injuries.”

That particular issue focused on the launch of FICHT technology. We suspect all their editors were too focused on all the hoopala surrounding FICHT to catch the prop guard statement.

Another interesting exchange with the Aussies about the OMC surf guard occurred in a 19 Nov 1987 fax from Mike Sweetwater (OMC Australia) to Dick Snyder. In that fax, Mike Sweetwater said:

“With regards to the injuries when guards are fitted, we have enquired at several clubs operating these units, and no serious injuries have been reported. People do get struck by the outboard motors with guards, and the only ill effects being minor bruising and abrasion. Collisions with people in the water have occurred at various speeds including full throttle.”

“Coming back to the topic of injuries, when guards are fitted (paragraph 3 – fax 19th November 1987) I would add the following information:-
… The guards are fitted to minimize injury when a “patient” is alongside.

The guards are not and do not afford any protection, when craft are proceeding to and from patient pickup. …. The S.L.S.A. personnel are aware that impact with swimmers, etc., whilst the craft is operated at anything over idle speed, could cause fatal injury.”

It is quite obvious the “official memo” was written to try to cover themselves from some of their earlier braggadocious statements about the guard. Yamaha U.K. got caught in this same trap in 2012 with their flood rescue outboard guard.

2012 found Yamaha U.K. heaping accolades upon their stainless steel flood rescue outboard propeller guard. In October 2012 we published three posts about their new guard and included some of their statements. By early November all references to Yamaha’s new prop guard had been erased from the Internet. Sound familiar to the OMC S.L.S.A. guard situation?

We later republished Yamaha U.K.’s actual documents. We asked the USCG Office of Boating Safety to ask Yamaha what was going on since they would not respond to us. USCG later reported Yamaha said they just had a customer that wanted to buy some outboards with some guard so they bought some and put them on. Kind of odd that all the literature was published after they delivered the flood rescue outboards to Lincolnshire and then vanished shortly after our coverage of it. They did not provide an explanation for that.