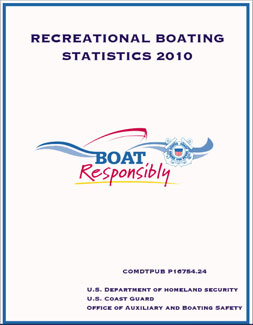 The boating industry continues to claim that all or almost all recreational boat propeller accidents are captured in BARD, the United States Coast Guard’s Boating Accident Report Database. This post proves that to be untrue.

Each year, USCG summarizes all the accidents reported in BARD in their annual USCG Recreational Boating Statistics reports.

USCG describes their use of the news reports on page 8 of their 2010 Recreational Boating Statistics report. The U.S. Coast Guard reports that in 2010 there were 56 accidents, 11 deaths, 46 injuries, and 13 losses of vessels that were captured in the news reports for which they did not receive an accident report. These represent all types of boating accidents, not just propeller accidents.

Earlier we reported the USCG 2010 public release version of BARD had been castrated by the expulsion of data from over 20 states and many other regions.

Now we will give a closer look to BARD’s handling of U.S. 2010 recreational boat propeller accidents.

The first thing we noticed was, where did they go? While USCG’s 2010 Boating Statistics Report lists 179 “Person Struck by Propeller” we only found 106 accidents when we left multiple vessels in the search (lists an accident report twice if two vessels were involved) and only a total of 98 different accident reports. We are playing with only about half the deck (98/179 = 55 percent of the propeller accidents that were reported and included). The remaining accidents are from the states that do not allow their accidents to be listed in the public release version of BARD, and thus we cannot see them.

A spreadsheet of our findings is below.

If you have trouble viewing the propeller accident spreadsheet, you can download it from the link just below it.

Were These Accidents Really Struck by Propeller or Propulsion Unit Accidents?

We recognize that just because you read something in the news does not mean its true. We do have multiple news reports on some of them, as well as video news reports and they all indicate the victims were struck by propeller or by the boat motor. Of accidents #1 through accident #11, seven were in Florida. The Florida accidents have been separately addressed in our post, Florida Propeller Accidents Missing From U.S. Coast Guard 2010 Boating Accident Report Database (BARD).

To follow up on the individual accidents, just note the date of the news media report and the state, then visit our 2010 Propeller Accidents News Media Reports page and find that news report. We have additional news reports of several of them as well. Below we will quickly summarize some of the news reports and the BARD entries for accidents outside of Florida by PGIC accident number.

News Media Reports – 17 year old girl tubing on Lake Shafter in Indiana was climbing back into the boat. She suffered multiple propeller lacerations to her left leg and foot and was taken to Clarian Arnett Hospital on August 12th.

Media Reports – Woman that regularly swims for exercise in same area was struck by propeller of pontoon boat at White Island Pony Pond in Massachusetts.

BARD redacted description includes “Operator struck an exercise swimmer with his prop or boat causing a deep laceration to her left elbow. She was Med Evac from the local hospital to a hosptail (sic) in Boston for further treatment… She also stated that she did not see or hear the vessel until seconds before impact and was not sure if it was the boat or prop that struck her as she tried to shield herself.”, but BARD only lists one Event, Event 1 – “Person Struck by Vessel”.

Media Reports – Dove in to retrieve a floating bait bucket and dove under to avoid being hit by an oncoming boat. He was struck by propeller of hit and run power boater. Victim had been fishing and sailing with a friend on Chesapeak Bay in Maryland on 5 June. News report said victim is now in a wheelchair in a nursing home with his girlfriend and says he has “a whole bunch of propeller bits out of the side of my leg.”

BARD redacted narrative just says he was struck by the hit and run vessel. BARD only has Event 1 – “Person Struck by Vessel”.

Media Reports – Two boys (ages 10 and ?) in rental boat with their father. Boat hits wave and both children were ejected. 10 year old boy was struck by motor, cutting his back. He was taken to Carteret General Hospital in North Carolina July 7th.

Do Not Forget the Other States

Please do not forget that the 11 struck by propeller or propulsion unit accidents we identified in news media reports that were not listed in BARD, DO NOT INCLUDE any accidents we may have captured in news reports from the 20 plus states and many other areas that did not report their data in the 2010 BARD public release. We only looked at media reports from a little over half the states. We could not check the others because we did not have access their BARD data. We suspect media reported propeller accidents from those states are not listed in BARD as well. Plus we expect still more government or commercial boats using the same engines and drives as recreational boats were involved in propeller accidents there too.

Our goal was to see how well BARD did at including the propeller accidents we had found in news reports as listed on our 2010 Boat Propeller Accidents page.

We used the tools in Microsoft Access to list the propeller accidents in 2010 BARD in reverse date order and printed off the BARDID, Number of Deaths, Number Injured, Date, State, and Name of Body of Water for those 98 boating accident reports. We also numbered those accidents from 1 to 98 in the far left hand margin.

Next we began to compare the two lists (98 accident reports in BARD against our list of news reports). We started going down our list to see if we could match every accident in the news media reports with its companion listing in BARD. When we found a match, we added a “Y” for “Yes” in one of the columns on the BARD listing and listed the accident number (1 through 98) in the far left hand margin of our list of news media reported propeller accidents. If we could not quickly find a match we drew a red circle to the left of the accident. If we found a possible match but were not certain, we wrote “check” to the left of the accident (indicating to check into it further later).

When we finished there were a whole lot of red circles (news reports without matching accident reports). Now we went down the list of states and regions that did not furnish accident data to the public release version of BARD 2010 and wrote “NR” (No Release) next to those red circles or “checks”/

That still left us with 11 red circles and 11 “checks”, or a total of 22 media reported propeller accidents to further investigate.

We entered those remaining 22 media reported propeller accidents into a spreadsheet for further analysis. Now, we compared these more closely with the BARD “struck by propeller” accidents. During the first round of comparisons we found two matches which were then removed from our list, we found on from a state which does not report so we removed it, and we decided we did not have enough information to make a decision on an accident that had been reported in Facebook, AND we found four accidents that probably do not meet USCG reporting criteria (commercial, government) and moved those to a separate list. This left us with 14 propeller accidents to try to find in the full BARD, plus the 4 we thought would probably be excluded for being commercial or government vessels.

Then things became a little more complex. We queried the BARD injury table and created a list of struck by propeller victims.

We found the Accident Report table in BARD has accidents listed in order of their BARD ID which reasonably, but not perfectly, compares to the date order in which the accident occurred. Some strong boating states (like Florida) have a lot of BARD reported boating accidents which makes it difficult to determine exactly which one might be the one you are looking for. We created a query of the Accident table that allowed us to pull many of the data fields for all the accidents of a specific state. Once we pulled the accident records from that state, we could use the Access tools to put them in date order. Having them in date order and comparing sex and age of the victims helped us sort through the more confusing matches. Eventually we became fairly confident we had the correct matches where they were available, and were fairly confident the ones we could not find were not within the BARD reported accidents for that state.