This session focused on testing of the proposed / exemplar guard.

Continued testimony …. (we just broke it because the page was getting too long)

Interestingly, when plaintiff’s expert witnesses can’t obtain the exact boat in other case and they go get an exemplar boat to test, the defense teams tell them how terrible that is and how the data just won’t be the same due to all the small subtle differences in the hull and other variables. Now when they do it, “It is exactly the same boat.”

Taylor talked about some test results having subtle differences and you needed a high degree of accuracy to show a difference, plus you need to record data rapidly.

Less expensive, less precise instrumentation can be a problem.

Calibration of instruments can be a problem. All the sensors he uses go back to the factory or to a lab to be calibrated.

Taylor recounted O’Sullivan had asked him to view the real boat, photograph the real boat, get an exemplar boat, put on a full instrumentation pack and install the Paulo guard.

When Taylor’s crew checked out the real boat they were looking for any mechanical problems. The steering worked and the boat was in fine condition. 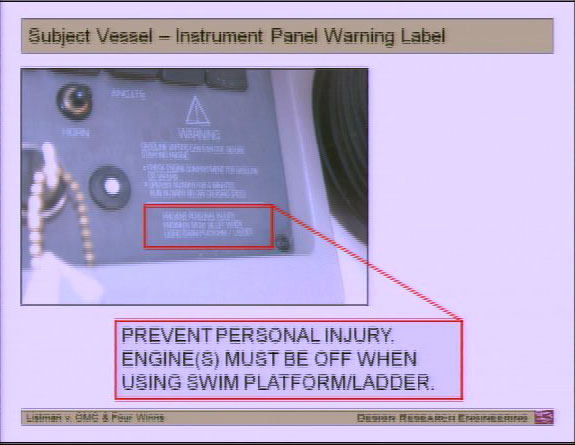 O’Sullivan asked if there were any warnings on the boat?

They also showed the transom warning. 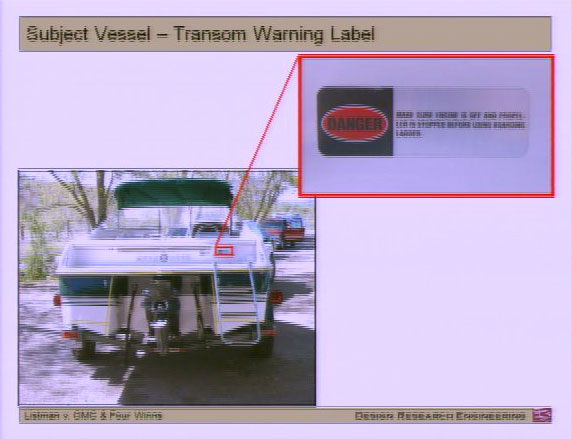 This process was very smooth. They have a very nice dog and pony show. The images are in my opinion, much better than those used earlier. They show an enlargement within the image that is readable. The actual images they showed were matted on a substantial black background. For some reason our capture of several of Taylor’s images were not plain. The ones we saw were very plain. Plus they quickly called up exactly the ones they were looking for. Things were much smoother in retrieving specific images than during Kennett’s testimony.

They talked about how many degrees the steering wheel was turned in various tests. Taylor noted that ABYC (American Boat and Yacht Council) has an emergency quick steer maneuver test in which within 1/2 second the steering wheel is turned 180 degrees and the driver should not loose confidence in the turn.

The second Paulo device was shipped to Taylor. In September 2010 they put it on the same exemplar boat and ran more tests.

Taylor showed a photo of some of his equipment on the boat. He also noted they measure steering torque, but that was not very important on this boat because it has power steering, but maybe half of all small recreational boats do not have power steering.

The purpose of the GPS base station which remains in a fixed location is to take out the corruption the government feeds into the civilian gps system. They know the base station is fixed, so when the calculations look like it is moving around a little, they use the same adjustment on the boat location to get its exact position.

He showed a photo of the exemplar boat vs. the real boat in the same slide.

The defense used several dual slides during their presentation. They were very nice and made things easier to understand and compare. Even more cool were the three videos in one frame displayed during some boat tests. We captured a still image of one of them later in this session.

Taylor talked about how the guard could hit something in shallow water and if it did the loading would come back up through the guard.

They showed a video of the guard going up and down under hydraulic power and said it had a snap action. If it came down somebody’s legs, arm, head, or somebody could be hurt. Taylor said it would need a manual override and they would need to protect against somebody being pinched in the vacinity.

That’s interesting. The defense thinks you need to guard pinch points in the guard if you put one of them on, but not the open propeller.

They spoke awhile about the dual acting hydraulic cylinders used to push the guard up and down. They have a disk in the middle, they have to push high pressure hydraulic fluid through the hoses and fittings, it needs a control system and a way for fluid to get back to the reservoir. In order to keep the system working it needs a considerable amount of pressure and force. The entire system weighs about 101 pounds. Plus it uses electromechanical valves to tell the flow to go one way or the other, and there are still more sensors, and then connect it to a pitot tube, plus an override.

They made it sound like it had the complexity of the NASA space shuttle, when it reality, it is on par or less complex than the hydraulic trim/tilt system already on most boats of this nature. Plus, there are many “flapper” type propeller guards that do not need any hydraulic power at all. The resistance of the water just swings them up and they skim along on the surface when underway and they come down on their own when the boat slows. We show several flapper guards at a 13 October 2006 entry on one of our Propeller Guard Technologies pages.

When Taylor tested the first device, it locked up and they had to go to manual operation.

The overall results were:

Top speed decreased due to some of the guard remaining in the water. It created a rooster tail when he looked back at it.

Crazy behavior in reverse when they tried to back it. It would either not turn, or always turn in the same direction.

When Taylor received the 2010 version of the guard (prototype 2 of Paulo guard) top speed decreased about 4 mph and reverse was still degraded. It would turn one way but not the other.

Once during testing above 10 mph, the guard came down at speed and drug the boat down to about 10 mph.

Later they did a simulated test to see what would happen if it came down at higher speeds. Taylor said if it came down in a crossing situation it could be bad (boats crossing). 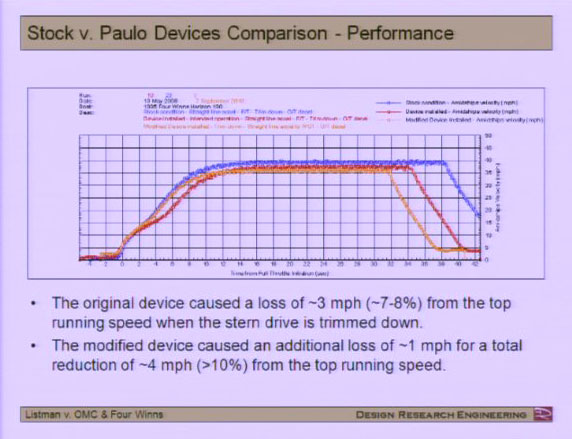 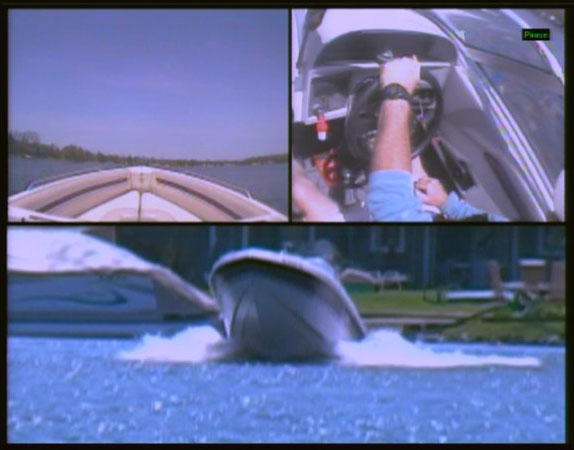 Taylor showed some video’s with three views on the same screen. We captured a still image of one of them.

Taylor said that when backing the boat with the guard in a right had turn, they could never get the boat to go the right way. It always went the wrong way. He said the vanes were providing forces and input on the boat that override that of the drivers. Then he said that feature would not be acceptable to the boating public.

Then he received the second guard and it was even crazier. The boat now went the other way all the time. He could never get it to back to the left.

We heard a ringing noise like a cell phone. Taylor said it was the sound of the data synching on the tape.

That seemed almost planned. They may have been trying to show the jury how meticulous they are by letting the hear that sound.

Taylor ran an inadvertent deployment test of the guard at 20 mph. The guard did come down on them once in testing, but this time they caused it to come down. If the boat operator applied some more power, they could possibly recover some of the speed loss.

Stopped for today, begin 9:15 am tomorrow.

Still singing praises for Robert Taylor as a great expert witness for OMC, we saw him chastised in the Decker vs. OMC trial for how much money his firm has been paid by the boating industry for defending them in propeller cases over the years. Now we don’t think they paid him enough. He has undoubtedly saved them a lot more. Please note – we certainly do not agree with many of his views, we are just stressing that OMC is really getting their moneys worth out of him.

We heard in the past that the presentation he did with Jay O’Sullivan was very smooth in the courtroom because they had done the same basic things so many times in the past. It takes more than just times to be that smooth. Robert Taylor is very good at it.