Bill Jeannet continues to cross examine Robert Taylor, an expert for the defense.

Jeanney, Any testing on any frequency of that mechanical failure (inadvertent deployment of the propeller guard)? Did you do any such testing? It occurred one time of its own accord.

You said inadvertent deployment could lead to handling issues at critical times like crossings. Did you do any testing? Not beyond the one I remember. I would have to check the data to see if there were other times.

It is not unusual to test reliability? Yes.

The jury should not take that 1 out of 100 as suggestive of a failure rate? Likely to move in direction of more frequent over life.

You don’t have any data other than anecdotal? That’s the observation I have.

In reverse, the steering would not match the input for prototype 1 guard and prototype 2 guard? You made no effort to determine where that problem lay? Right. 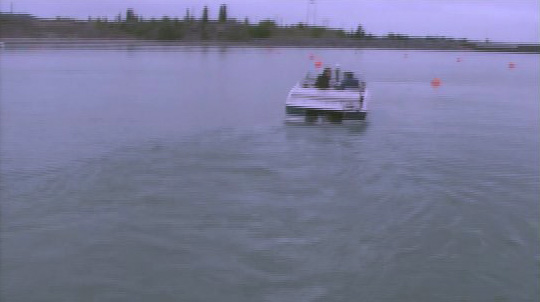 Showed Dr. Good video of boat with guard backing up. We could see the boat, the operator, and the steering wheel. This boat seems to go the right way? Right.

Has your opinion changed? This guard reduces the operational characteristics of any boat you put it on? Yes.

Did you attempt to obtain all the work done by Paulo and Good? Yes.

Why did you charge OMC $216K in this case vs. the Ah-Fook and Decker cases? Was there a problem in getting data in this case? Taylor, Work on this case was more protracted. Initially were not provided the propeller guards. Did work initially in a vacuum, a second series of tests, then tested the modified guard.

Plaintiff hired engineers, why would they not follow first principles?
Object

How much do these guards cost? When they were first proposed and we wanted one, we were told it would cost us $15K and plaintiffs would build us one. There were subsequent talks.

We finally see the source of the $15K price the defense applied to the guard earlier. That is obviously not a production costs if they were going down the assembly line at some volume.

We were singing Robert Taylor praises for his great job on the stand yesterday and we closed by saying it might not be so kumbayah today when the plaintiffs had a go at him. He still held up pretty well, but you could see him sighing now and then, his demeanor, and getting mildly frustrated one time. The hot seat boiled some of the charm off him, as it does to everybody who sits in it. We took a photo of him a bit more worn than yesterday. He still did a great job for OMC.

Did we provide you all pleadings?

Were you aware plaintiff alleged a warning claim, then dismissed that very claim with prejudice? Yes, I was aware.

You were satisfied the Decker and Ah-Fook analysis was effective? Yes.

How many years of multiple claimed designs in multiple boats? I have been involved since the mid 80’s.

Taylor, Physics are not going to change. No metal can tell the difference between density of water and that of a human.

Do you agree with Dr. Reed that they (guards?) are fundamentally unstable?

With these guards or any kind of guard in the water, would you put one on your boat? No.

There are certain cliches that both sides typically throw in each time. The man on the moon from the plaintiffs, defense got in the water is 800 times denser than air line, Taylor got in his metal can’t tell the difference between water and people line, plus he also got in the you can’t change physics line. Writing this list of cliches just gave us cool idea we may post on our site after this trial ends and we sleep for a few days.

Judge, Counsel will need to settle the law that you will be given.

A main portion of the trial process is completed.

Then we will hear closing arguments.

We will adjourn till 8:30 am tomorrow.
Will give you instructions then, and hear the arguments. We will have time limits.

Jury will get the case tomorrow. We do have a 12 o’clock building deadline tomorrow (they have to be out of the building for some cause). So Jury will have to come back Monday to deliberate.