This session focused on Part 1 of Closing Arguments for the Defense. 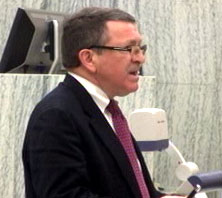 Mr. Sullivan opened by thanking everybody, then said his message is straight forward. Prop guards don’t work. They have hidden dangers, create defects in a product, and they are never used by anybody.

What counsel argues is not evidence. We just want you to use common sense.

I asked you on behalf of OMC, In plaintiff’s closing you heard what OMC will say. You did not hear to use common sense.

Did any of plaintiff’s witnesses test their guards for entrapment? Instead they attacked the defense.

Finally to my astonishment, you all know what 6 axis means, was any of the testing done on 6 axis of rotation? No.

Plaintiff claims OMC did nothing.
If we did nothing, why in 1995 were we selling jet boats and guards to help fishermen in rivers protect the prop? We were selling diverse products and offering consumers a choice.

Why didn’t Robin Listman go buy a jet boat? Her husband put on one guard, it immediately failed less than 100 yards from shore. Fortunately it was not made out of metal so it did not strand them.

Plaintiff showed video of Robin Listman walking down apartment steps where she did not live in a prosthesis she had not worn in two years. That’s chaff.

Whats the standard the Plaintiff has the burden of proving?

Robin owned the same kind of boat, same year, same model, but outboard engine. She owned the exact same boat that her children still go out on today without a propeller guard.

The rest of the instructions are pretty straight forward. We are simply saying you must separate the wheat from the chaff.

Wheat – admissions by Robin Listman as to when propeller guards exist on a boat anywhere in the world in 1995 to present. No. Government regulations requiring them anywhere. No.

What was a substantial factor? Plaintiff claims she slipped. Evidence supports she jumped when boat was going in gear, out of gear, in gear.

O’Sullivan then went through the legal instructions.

Every witness said a spinning propeller is dangerous, not a one said otherwise.

That is not what Mark Porsow said. When McNally (another OMC attorney asked Mark Porsow, Do you feel that the spinning propeller itself is dangerous? No.
In this same time frame and for much of his closing, O’Sullivan kept wandering around, going forward and backward, drinking from a water bottle, turning around to look at the projection screen. We were tying to capture a picture of him and it was hard to catch him in one place long enough. All that movement was distracting to me. We finally got the photo above.

The propeller did exactly what it was supposed to do, propel the boat.

It’s easy to see the propeller at times at Pyramid Lake, in the summer- maybe not.

Then we heard a change in argument. Jet boats. You the jury should know out of common sense that every boat in world with a propeller on it is not unreasonably dangerous.

We are talking about the wheat, not the chaff.

Then, they went to alternative designs. We talked about them, we sold them.

Plaintiffs said, there are other guards out there.
Those companies don’t exist anymore. They were there one time, however briefly.

By the way, OMC doesn’t exist anymore either

Commercial feasibility, every single test the plaintiff talked about, they failed. All of OMC’s test failed. You can’t get around the laws of physics, they break, they create unintended consequences.

If you put one of those guards on would you expect to change all of those characteristics on it? Prototype 1 and Prototype 2 won’t even steer straight going backwards. Dr. Good admitted he hasn’t even invented Prototype 3. Trying to dock, put it in reverse.

Local County representatives, federal representatives, Coast Guard, Canadian … they all say this boat is safe. The laws in Nevada claims what is to be on a boat for it to be safe, and it is.

Talked about what Plaintiff did that day.

She JUMPED or fell into the water from the swim deck fully realizing where the propeller was.

Whatever you do, turn off the engine before you get on the swim deck. Yes, she knew and appreciated the danger.

Dr. Boyden, orthopedic surgeon tired to save her life because she went somewhere she should not have been.

Its not the propeller spinning or not, the danger is being next to an unguarded propeller.

Its not the atomic bomb that is dangerous, the danger is being next to one when it goes off.

The evidence is in front of you. Plaintiff said you know somewhere in the world there are special rescue boats with something around the propeller. Court took notice. Those boats require a special pilot due to those effects.

Despite training to marines about how to land boats on the beach, they do not use them anymore because they were causing serious injuries.

O’Sullivan showed a certificate of proficiency required to even know how to get in a boat like that.

Puzzled by Plaintiff, that all the defense did was bad, but plaintiffs did not test, no 6 axis.

Dr. Good could not tell you if this device is safe or unsafe after six years.

Plaintiff’s expert propeller guard theorist said if just somebody would develop one the world would be a safer place.

The standard is a reasonable person in the community. We have to look at the year 1995. Listman was asked if her own boat was in anyway dangerous then or now and she said no.

Mr. Jeanney talked about 10 percent less in speed was the only real issue.
You would have to factor in a 2.5 power curve to get fuel consumption of 30 percent more.

You can’t even steer in reverse.

On plane goes from 5 to 7 seconds.

You have significant plume which obscures the driver’s view of the skier.

I guess he forgot that Robert Taylor agreed to give up that issue the other day, but only after they riveted it into everybody’s brain. Now, they put it back on the table as a serious issue again.

The boat pitches like crazy. A seven year old would stand up because its like a roller coaster and he’s ejected.

It jerks in turns. You are in a turn, it jerks, and you are out of the boat.

You have to add all the stuff. What is a likely problem if you do not have double stranded stainless steel hoses and there is a blowout at 3,000 psi. That’s a serious problem. Mr. Taylor is in Michigan and has a blowout 50 miles out on Lake Michigan. How do you get back? Very slowly.

Inadvertent actuation. In just three days of testing it failed once.

Serious pinch points. Don’t let your hand get anywhere near it.

Would anybody buy such a device? As demonstrated by their own witness, No.

It adds about 100 pounds. 8 passengers at 125 pounds each and will be an illegal boat. Coast Guard rated for 1200 pounds max. Did Dr. Good tell you that or did I have to carefully illicit that from him because he did not want to tell you.

Speed sensors are all pitot tubes. Any place in the water warm they will clog. If this puppy ever at 40 mph in a turn clogs it will drop down.

OMC is unwilling to accept the dangers of a device like this.