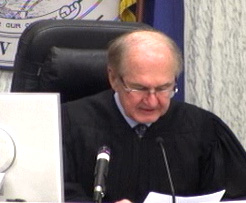 Bailiff received the verdict from the Jury, gave it to Judge Polaha, he read it, then gave it to the clerk to read.

Question 1 Did the Defendant design the product in question? Yes

Question 2 Was the product unreasonably dangerous i.e. it failed to perform in the manner reasonably to be expected in light of its nature and intended function and was more dangerous than would be contemplated by the ordinary user having the ordinary knowledge available in the community and accordingly defective? No

If you answer to Question Number 2 is no you verdict for defendant and you are not to proceed further except to sign and return this verdict.

The jury was polled. Six said the verdict was theirs as read, two said no, meaning vote was 6 to 2.

Judge Polaha thanked the jury for their service and adjourned.