Bill Jeanney continued with his closing.

OMC Project 441 in 1978 – You heard the results and interestingly enough Mr Kueny never retook the stand to explain 441 was something different than he testified to in direct, that it didn’t substantially bother the boat in terms of maneuvering, it affected performance, but 441 didn’t go anywhere. Was it just to protect the market so the Japanese couldn’t use it?

443 was the next project (That specific slide was missing from the slide show and Mr. Jeanney did a good job of moving on until someone found the slide and projected it for him. He did a nice recovery in a high pressure situation.). They tested it and the materials failed in some fashion. They never recovered the pieces to analyze and never went forward with the project.

Interestingly enough, 441 project turns into a patent in 1981, 13 to 14 years before this boat propeller was designed and sold. But this patent never went into production. OMC never put Kueny on the stand to explain why didn’t this happen (commercialize the 1981 patent).

Waterjets – these aren’t prototypes. They are on the market being sold. And interestingly enough, Mr. Kueny testified that OMC did produce a jet. In fact in the mid 1990’s it was their highest seller, then the market fell off and it wasn’t as successful. But the design engineering is here. This is an alternative and no question safer as regards to an unguarded propeller. Alternative designs were available 30 to 40 years before this boat was sold her in Nevada and caused Robin Listman to lose her leg.

In addition to those alternatives, we asked Dr. Good at Collision Analysis to develop a retractable guard because frankly, it makes good sense. If the issue is performance, get it up at that mph it is not needed any more (10 mph).

These prototypes were developed by Dr. Good and it took less than two years, and they worked. 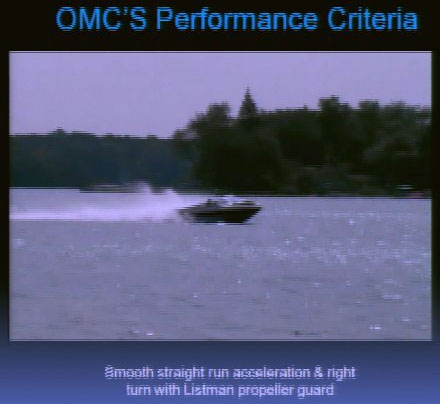 Jeanney showed a video of a straight acceleration run with a right turn with the propeller guard on.

The plume of water the Defense kept talking about that was kicked up by a portion of the guard still being in the water was clearly visible. That is one thing that should have been easy to eliminate that would have helped their case. While it is a minor issue in the performance of the guard, it is just one more thing the Defense could pick at and it was clearly visible in many of the videos. If nothing else some sort of deflector could have kicked the spray back and down while simultaneously providing some protection to anyone falling from the boat onto the guard (another complaint raised by the defense), AND maybe keep you out of the pinch points as well (yet one more complaint). One of my hats outside of propeller world is helping inventors really shine their inventions up by anticipating all the objections potential licensees might raise against their invention and then either removing them or minimizing those objections. Then, once the potential licensee sees the product they are wowed and see the invention’s true potential instead of seeing the obvious flaws of a first round prototype.
While we grant the Defense was not an easy audience, they were wowed by this guard but for the wrong reason. They were wowed by all the things they could throw rocks at to pick it apart.
On the flip side, we recognize the legal team has “x” dollars to risk on a case like this and they can’t be expected to develop a super polished prototype with absolutely no blemishes either.

Jeanney showed from Dr. Good and from Mr. Taylor the boat’s ability to maneuver in reverse and said we will talk more about Mr. Taylor’s testing a little further into my discussion.

You saw all the video and the data from all the machinery used to collect data, but the bottom line is the boat was tested and there is virtually no difference.

We talked about the defense OMC would be asserting in our opening argument.

Jeanney then went on to address each point. We summarize a few of his points below.

First day of the trial, Mr. Kueny told us OMC never relied upon the U.S. Government or the Coast Guard to define a safe design. He said OMC believed a product should be designed safely even it the Coast Guard didn’t say so. 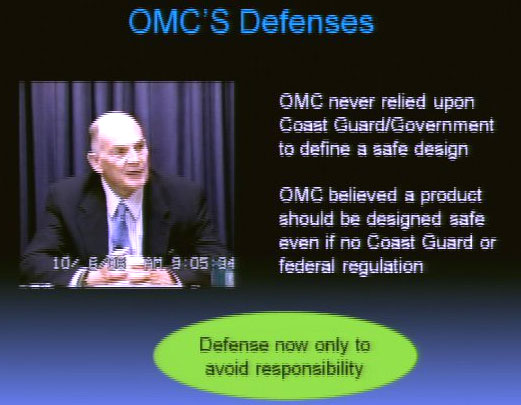 The defense (that USCG did not require it) is only to avoid responsibility. Mr. Kueny told us that.

We don’t have to guard it because it’s open and obvious – he showed the Coast Guard “Hidden Danger” flyer again.

While the Hidden Danger flyer slide had some good kick to it, I still would like to see them hit with the ABYC warning issues we raised on pages 70-71 of our houseboat study. Essentially, ABYC (the industry’s standards group) says a hazard must meet four criteria before it requires a warning label. One of those criteria is “The hazard is not obvious or readily discoverable by the user.” NMMA now requires propeller warning labels on all boats built by members of its NMMA Certified Boat Builder program. Seems to me like that is a strong admission that propellers are not an obvious hazard. Especially since standards are so incredibly important to OMC as observed by how frequently they brought up the lack of standards in the trial.

Performance Criteria – The first day of the trial Mr. Kueny outlined boat performance criteria and said the overall criteria was 10 percent (less than 10 percent deviation from an an unguarded boat’s performance against his list of criteria.). We provided that criteria to Dr. Good and the guard works within that criteria.

When we asked Mr. Taylor on the stand about the reverse video (boat steering wrong way) and why it did, he said I don’t know, I didn’t bother to look.

The guard had a lot of surface area in the water in reverse, including in vanes in incoming flow to the prop and along its sides. One possible difference could be recirculating flows and the depth of the water. In shallow water much more water keeps going around and around through the propeller (same water keeps going through over and over at take off and very slow speeds especially when stern of the boat has little clearance between it and the bottom of the lake/river/pond.). With those big vanes on the sides some strange things might happen in shallow water. It is obvious the exemplar guard was not built to be the perfect guard. It was just built to prove the defense criteria could be met. If we were trying to amplify any effects the prototype guard might have, we would have been running it in shallow water. The Defense is not stupid. They were probably doing it too.

Mr. Taylor was supposed to come in here and tell you this prop guard didn’t work and he didn’t say that.

Jeanney went on to talk about Mr. Taylors background and the money he has made testifying for OMC.

Did you hear him give testimony of an unguarded propeller being unreasonably dangerous? We wanted to ask him about that.

Mr. Kennett ran a whole series of tests where they took prototypes in a garage, put people on a little cart, steering them in, then showed they could conceivably reach inside the guard. This is called air testing. What if anything does it have to do with being in the water?

Mr. Kennett would take a limb or some kind of limb, a hacksaw or a Jones saw or some kind of limb. They’d tie them up then they would back over them. Under examination by Mr Vaage he was asked, You are sophisticated enough, you could put actuators on the limb and see what happened in the water. Mr. Kennett said, that’s a good idea, I didn’t think of that.

hacksaw or Jones saw was a swipe at the saw bones surrogate limbs.

The entire tests that were performed were geared at maximizing the result. 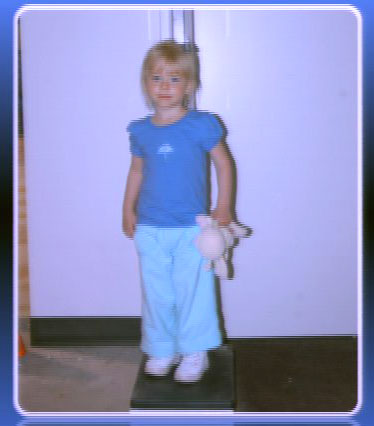 He (Mr.Kennett) was not testing the guard. He was trying to show in the most extreme form a person could get their hand or arm in it. He used the little girl with the teddy bear. He put her on the mechanics sled and she extends her arm into the guard. He said he did it to show she can get her arm in there. Where were all the photos of the cute little girl sticking her arm in the exposed propeller?