1 November 2011 Session One – pm (Note there was no morning session, this was an afternoon session per CVN)

This part of the session was the plaintiff, Robin Listman, on the witness stand. It followed the Defense’s Opening Statement.

This section starts about 2 hours and 18 minutes into the CVN video for this session. 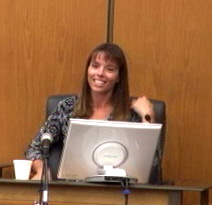 She works for a gynecologist. Robin started working for her when she was just 19 as her office manager and has stayed with her for over twenty years. The practice is growing and Robin now has to get up and get around more.

Robin was born in rural Wyoming and is now in her forties.

She comes across as a very fine young woman and does not seem to be as old as she is. She is zestful and happy visiting about her early days.

She was previously married to Kevin Listman. They divorced amicably in 2003 and have two children, a boy about 15 and a girl about 13.

Robin does not have a special vehicle and has learned to drive with her left foot.

The only changes to accommodate her in her home are shower bars.

She is now engaged.

She previously hunted, camped, and enjoyed the outdoors.

She and Kevin Listman purchased a boat together before they were married.

Robin explained the basics of the accident. They were in a friends boat trying to retrieve a floating inflatable tow toy that had blown off the shore that belonged to her son. The inflated float toy blew behind the boat, she stepped on the swim ladder, crouched and reached for the toy, the boat operator shifted into reverse, she fell in, and was immediately struck by the propeller. We did not describe the accident in detail because it is described several times in our later coverage of the trial.

She had a life vest on, fell in, was disoriented, I hear engine noise, feel sucking motion, and there is blood everywhere.

I had no pain, I just saw a lot of blood. The next thing, Mark is in the water, ladder is folded down, Lisa Porsow helped me into the boat. At that point I’m in shock.

She remembers sitting on the back of the boat on the padded transom area, the panic, Mark asking someone to call 911.

I never looked at my leg.

She goes on to tell the events of how it seemed surreal, they tried to get to cell phone service, Pyramid Police pulled them over, her leg started feeling like it was on fire, a fire truck meets them, a careflight helicopter is requested, and she was flown away. 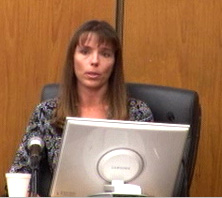 She understandably gets a little emotional telling the story. We left out much of her testimony of the accident as it feels a bit personal to post. You can tell by comparing this image of her on the stand to the earlier image that retelling the event of her accident is an emotional challenge for her.

A recent U.S. Coast Guard Advanced Notice of Proposed Rulemaking USCG-20111-0497 on Propeller-Strikes and Carbon Monoxide asked for data or information on benefits or avoided damages which may result from the use of measures to avoid propeller strike casualties. I pointed them to this video as it does a great job of showing the impact a propeller strike had on this woman’s life. The traumatic impact of the event, the pain and problems during recovery, plus the long time effects of being short a leg, dealing with a prosthesis, constant pain, and many other issues she now faces.

I stopped the CVN video at 3:15:03 and came back later that evening to finish taking notes from the session, but my free access is now over. We really appreciate CVN providing us access for several days to blog the trial and we need to be getting on to other things now too.

CVN provides a great service and we highly recommend it to anybody needing remote access to a live trial, or access to recorded trials. Seeing the videos is far more telling than just reading the transcripts.

From watching a few moments of the start of the next video, I am aware the end of this one covers some of her problems in trying to get her residual leg ready for her prosthesis and other challenges she faces due to loosing her leg.