NBSAC 95 on outboard motors breaking off and flipping into boats

Minutes of that meeting were posted in October 2016.

We have spent considerable effort in recent years encouraging NBSAC to:

As we recently closely read the April 2016 NBSAC meeting minutes we noticed they did mention this accident scenario, but they described it in a manner we have never seen or heard before.
We find that quite odd, since several members of the committee and other industry representatives present were well associated with the problem. 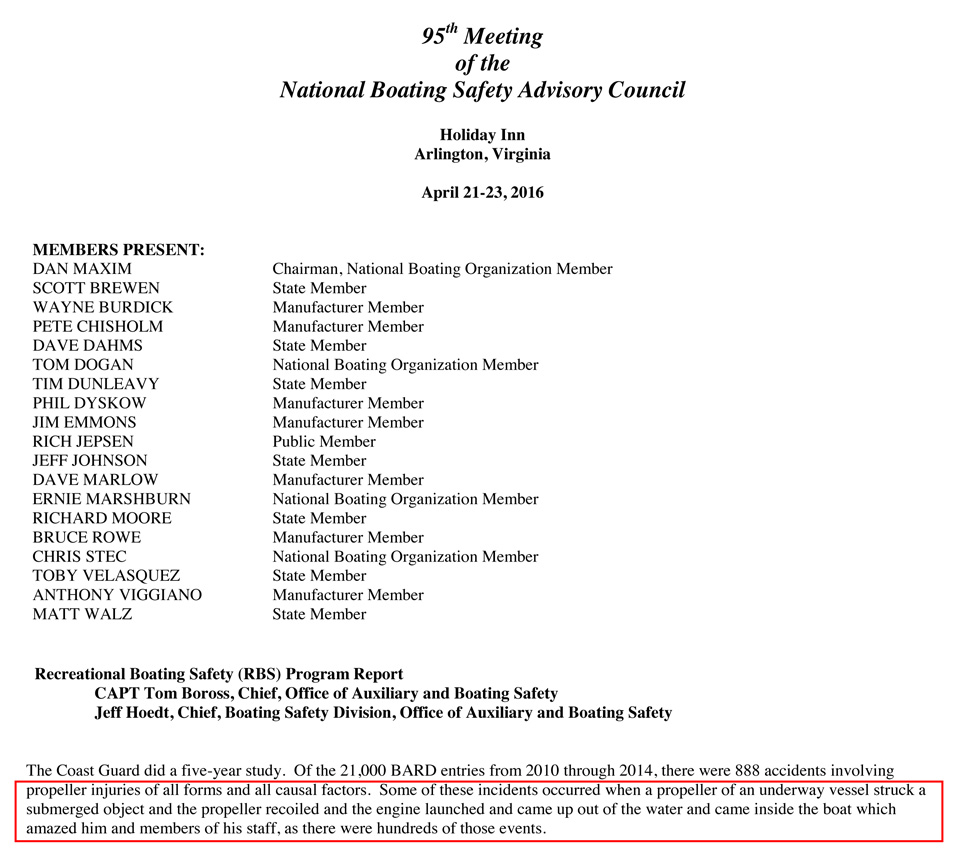 The image above is a composite of pages 1,7, and 8 of the minutes.

On page 8, Captain Boross, Chief of the Office of Auxiliary and Boating Safety, speaks of a recent Coast Guard study of boat propeller accidents. During his discussion of the study, he notes some boat engines are striking submerged objects and entering the boat.

He describes the process as, “Some of these incidents occurred when a propeller of an underway vessel struck a submerged object and the propeller recoiled and the engine launched and came up out of the water and came inside the boat which amazed him and members of his staff, as there were hundreds of those events.”

PropellerSafety.com comment – Let us be perfectly clear, that is not the normal method of entry for outboard motors entering boats after striking submerged objects. The skeg or leading edge of the outboard motor lower leg in the area of the torpedo initially strikes the floating or submerged object, NOT the propeller. Our Outboard Motor Log Strike Mode by Speed and Resistance to Impact Chart post and its accompanying chart discuss the entry process in detail, including multiple modes of the outboard entering the boat.

As to Captain Boross, Chief of the Office of Auxiliary and Boating Safety, we thank him for raising awareness of this issue and refer him and NBSAC Council memebers to our Public Comment Letter to NBSAC addressing the issue of outboard motors breaking off and entering boats we have repeatedly submitted to NBSAC since October 2014.

While we are thrilled to have NBSAC at least acknowledging these accidents occur, and that there are hundreds of them, we are disappointed:

But that is life in the trenches at Propeller Safety. Its a great day when we go two steps forward and only one step backwards.