We present his closing arguments in a series of three posts (this one plus two more).

Mr. Jeanney thanked the Jury for their service in behalf of Robin Listman, himself, and Mr. Vaage.

Then he began the closing with, It took ten years to gather the evidence in this case. Each party has one chance in this case and its been these three weeks. He also thanks Miss Paterson who is retiring soon for her efforts in keeping things organized.

In 1776 this country became a nation. We created a constitution that included a right to jury trial. They did that because they really didn’t trust the government to protect us.

This is one of those rare and unusual cases that sometimes comes into a courtroom that are more important to an entire community. The Judge told you this was a big case. Its a decision you will make about how the citizens will be protected in this community. You have the power to cause this corporation to change and power to protect a consumer in the future that can be catastrophically injured by an unguarded prop.

It takes ten years to get here, it takes three weeks here, its been an incredibly journey for Robin Listman. She does not seek sympathy.

The question in this case is this. (He showed a video of a boat with an unguarded propeller in reverse at idle backing into a surrogate limb.) In designing the boat, seemingly this could occur, did occur, would occur, and continues to occur in the future and whether or not those alternative designs would prevent those injuries and the ones before you in this court.

Unreasonably Dangerous – that’s the issue in front of you today.

Preponderance of Evidence – the standard of proof. What does she have to prove. The Court read instructions about preponderance of evidence. Such evidence as when weighed with that opposed to it has more convincing force and from which it appears has a greater probability of truth.

Jeanney defined unreasonably dangerous as the Judge did earlier, the definition ends with “and was more dangerous than would be contemplated by the ordinary user having the ordinary knowledge in the community.”

Three weeks ago you were ordinary people with ordinary knowledge. Over these three weeks of trial did you gain some knowledge about the dangers of propellers you did not have before. Compare that knowledge with the knowledge you have now. In gaining that knowledge did you gain knowledge about this unguarded propeller that you didn’t have before? Did you know that at idle in reverse it could strike 15 times in one tenth of a second? That at less than ten miles an hour these accidents typically happen with an unguarded propeller? That there were alternatives designed out there like jet boats and prop guards and that they would have prevented accidents?

Jeanney made a good point here. He got the Jury to admit to themselves that they had learned a lot about the dangers of unguarded propellers during the three weeks of this trial they did not know before. To be unreasonably dangerous means a product was more dangerous that would be contemplated by the ordinary user having ordinary knowledge. The jury at least should have recognized that they now have much more knowledge than Listman likely had at the time of the accident about exposed propellers. In parallel with a post we wrote a long time ago, the Jury has been vaccinated with a fear of propellers for a while. We would expect them to be much safer around propellers for a while. But over time, that vaccination will wear off and most of them will return to their prior ways. It’s like when a train hits a car and kills some passengers at a railroad crossing in your community. Everybody starts diligently looking both ways for a while, then six months to a year later they start just zipping through again.

Defense will say they asked every ordinary person that took the stand if they knew that prop was dangerous. Well, they were just like you. They had that same amount of knowledge.

Because the danger is hidden and not disclosed by this corporation, ordinary people don’t know the dangers we shared here the last three weeks.

Alternative Designs – you heard this product was designed in 1994. You have heard testimony of alternative designs. Then Jeanney displayed a nice slide of entry dates of Kort Nozzles, pump jets, ring guards, cage guards, OMC’s patents, and water jets. 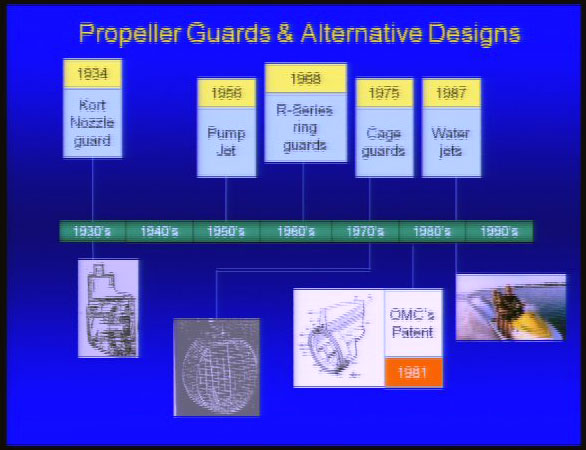 When we started in our opening statement we talked about things the parties agreed on. Then Jeanney showed a slide listing them: Spinning propeller is dangerous, People will get off the boat, Driver can’t see people behind the boat, and a guard will make it safer.

Mr. Kueny, when we put him on the stand told us that a guard could be developed and it would make it safer.

We put him on the stand. For some reason the Defense did not put him back on as the most knowledgeable person from OMC about these matters.

Yet for 50 years, no alternative designs.

It is undisputed that OMC established performance criteria that if those could be me met and it were economically feasible and there weren’t drafty downsides to it, they would try to use it.

The Defense in this case said it can’t be done. This is in an environment where throughout the world we have been known as the Can Do society. We put people on the Moon, developed an artificial heart, and the Internet was developed. All these things were developed in the same period OMC could not develop a propeller guard. His comments were accompanied by the very patriotic slide below.

Listman Trial - Man on the Moon image courtesy of CVN 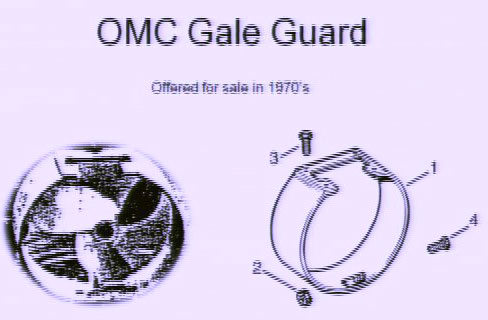 While they are telling us they can’t do it, we know from the evidence that they did develop a prop guard. The Gale Guard in the 1970’s. Testimony has been that it was to protect the propeller. It protects against anything coming in from the side.

You heard Mr. Kennett go on and on about our guard being a terrible risk for entrapment but this boat (Gale Guard) was used in the water in and around people. Where is the evidence of any problems with entrapment with the Gale Guard?

They (OMC) sold it for 20 years with out evidence of one such incident. We know an OMC subsidiary sold the Australian Surf Guard in 1997 used in chaotic rescue situations. You saw the letter from Australia telling how well it worked.

Where was the evidence of any people being entrapped in it? OMC sold it, but has no reports of entrapment or injuries. But when confronted with these prototypes they are actually petrified that people are going to get entrapped, but they sold two products with no problems.