The Storm Lake Iowa Laass v. Brunswick case has focused attention on outboard marine drives striking submerged objects and flying back up into the boat. In the Storm Lake accident, a ten year old boy, David Paul McFarlin was killed on May 31, 2010. A 175 HP Mercury outboard struck a submerged dredge pipe, flipped back up into the boat, and the boy was killed by its propeller.

First, a point of clarification. The U.S. Coast Guard does not recognize accidents in which people are on boats or otherwise not in the water when they are struck by propellers as propeller accidents, so this is “officially” not a propeller accident.

Marine drive manufacturers use relief valves and check valves in the trim systems of stern drives and larger outboards to cushion the blow and absorb the energy of striking submerged objects. The relief valves allow the cylinder rod to extend (drive to swing up as it dissipates energy), then the check valves allow the cylinder piston to settle back down to a “memory” piston. Mercury Marine is well known for conducting log strike tests which we discuss on our Laass v. Brunswick page, and supply an early video near the bottom of this page.

We often see U.S. Coast Guard Boating Accident Report Database (BARD) reports in which an outboard was torn from or broke off the transom. Some of these outboards sink, while others remain attached by cables, hoses, and/or fuel lines. In some portion of these instances, the outboard strikes a submerged object and actually flies up / flips up and lands in the boat. As a result, people in the boat can be struck by the outboard or cut by its still rotating propeller.

We decided to investigate BARD and some other sources to gain some greater understanding of these types of accidents and perhaps some insights into their frequency.

During this process we also found some interesting comments about these outboard “flipped into boat” accidents in online boating forums. In one forum discussing a report of a “flipped in” accident, members were discussing if this was even possible or not.

To get some quick results we focused on 2008, 2009, 2010 Public BARD because they contain the redacted narrative of the accidents (verbal description of accident with people’s names and personal information redacted).

In addition we were able to spot a few outboard “flipped into boat” accidents in legal cases, online boating forums, and news reports.

The spreadsheet below summarizes our findings. Please do NOT make any estimates of frequency of these “outboard motor flipped into boat” accidents until you read our accident frequency comments later on this post, as well as the section on how we identified the outboard boat accidents in the spreadsheet. You can download a pdf of the spreadsheet by clicking on it. It is best viewed on a 24 inch or larger monitor.

NOTE – the downloadable pdf chart is newer and has more accidents listed on it than the one visible in the image below. 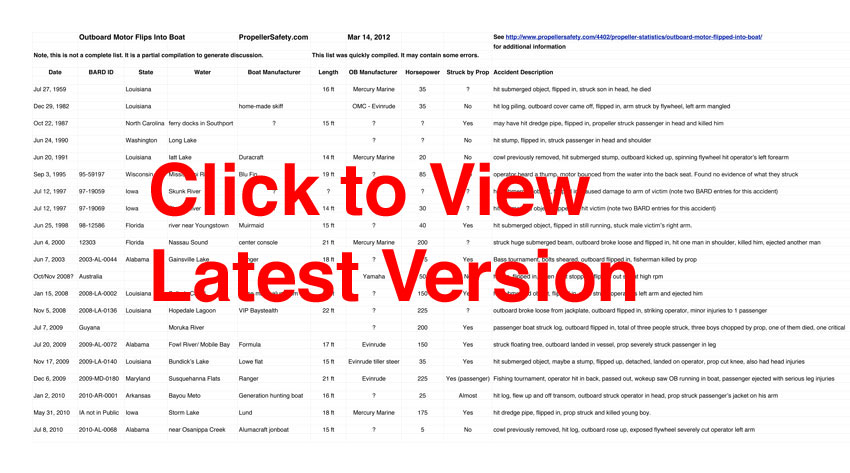 As we continue to focus on this topic we have developed some tools to help those working on the problem:

As we encounter more accidents we list them below until we update the chart again:

Call for Help in Identifying Accidents

If anybody is aware of any boat accidents in which an outboard flipped into a boat not listed above, please drop us a note using the Contact Us tab in the menu, and we will add it to our list.

How We Identified the Outboard Boat Accidents Above

We started with the Public versions of the 2008, 2009, and 2010 U.S. Coast Guard Boating Accident Report Database (BARD). Those three years include the redacted narrative that helped us identify some accidents in which the outboard flipped into the boat. We began in the Accidents table and sorted Event 1 accident types alphabetically, then individually read the narratives of those labeled as “Collision With Floating Object” and those labeled as “Struck Submerged Object” looking for tips that the drive flew / flipped into the boat. We also used the same process for sifting through Event 2 accident types. We did not check Event 3 accident types because we felt it unlikely anyone would strike a floating or submerged object hard enough to knock a drive into the boat as the third event in the sequence of an accident, plus few accidents list 3rd events anyway. Once we identified boat accidents of interest, we went to the Vessel table for information about the boat and drive / outboard.

NOTE – our process above missed some 2008, 2009, 2010 “flipped into boat” accidents we were later able to identify from other sources. USCG does NOT have any indicators, categories, etc. to identify accidents of this nature (not even to identify the outboard ripped off the transom category). We are left to whatever was written in the redacted narrative. The same goes for them being struck by the propeller after the outboard flipped in. The redacted narrative of these “flipped into boat” accidents may say they were struck by the propeller or it may not. No mention of being struck by the propeller does not mean they were not struck. The bottom line is, it would be very difficult to impossible to determine how many of these accidents are recorded in BARD because BARD did not specifically identify them. Correspondingly, it would be even more difficult to say anything about the frequency of those in which the outboard flipped in and someone was struck by its propeller.

We also did some word searching of our own databases, some news databases, and some legal databases and found several additional accidents. We backtracked into BARD using their date and location to find the associated BARD reports for some of them.

Later on we went back and reviewed some earlier BARD data (1995- 2001) that had some spotty data in it (not all years provide a verbal accident description, and the years that did often only provide a verbal description for a fraction of the accidents). We were able to identify a few more relevant outboard accidents from this earlier BARD data. We also undertook a separate venture to identify some Boat or Marine Drive Struck Dredge Pipe Accidents. During that process we also identified at least one more accident in which the outboard landed in the boat. We updated the spreadsheet above to included these findings on March 15, 2012.

Some Statements About Frequency of Outboard Motors Flipping Into Boats

As mentioned above, BARD had no category or markers for these accidents making it impossible to directly identify from BARD data only if an outboard flipped into the boat or not, if the redacted narrative does not mention it.

Other areas of our site address the issues of under reporting of accidents and accidents being misclassified in BARD.

In addition to the issues already mentioned, we identified two possible subcategories of these accidents we had not previously anticipated.

Plus approaching half the states withheld their data from 2010 Public BARD citing privacy issues.

The multiple possible causes, accident report forms not collecting information about “flipped in” or not, under reporting, states not reporting, and other issues make it difficult to make any statements about the frequency of these accidents. Therefore we elected to just identify some of them as exemplars of “outboard flipped into boat” accidents.

Our examples illustrate the range of ways these things happen and a cross section of the types of vessels they occur in.

Outboard Motor Flipped In AND Flipped Out

In at least one of the accidents, (Oct/Nov 2008 Australia), the outboard flipped in, then as the boat came to rest, it fell back into the water (per the operator’s description as posted on ausfish.com.au). We suspect this may happen more frequently than it is specifically reported (outboard breaks mostly loose, flies up onto stern of boat, then falls back into the water).

We talk some about the trim systems and log strike tests in our coverage of the The Laass v. Brunswick case.

As always, additional information is available on the accidents we identified from BARD and typically even more is available from a copy of the accident report filed with the respective state boating office.

We noticed Louisiana appears to be over represented in our sample of accidents. They were similarly over represented in BARD “Collision With Floating Object” and “Struck Submerged Object” categories. We suspect that is due to lots of shallow water with lots of stumps, roots, and floating logs in it, combined with lots of people in small boats. If anybody wanted to start researching outboard “flipped in” accidents, Louisiana looks like a good place to start.

We also noted the presence of at least two outboard “flipped in” fishing tournament accidents and one more in the discussion of anecdotal accidents. High horsepower outboards racing around in a fishing tournament may also provide a venue for these accidents. Or they may just generate more media coverage because the media is already present.

A 1956 Sports Illustrated article titled “Stump Jumpers” indicates many communities held shallow water boat marathons that included stump fields. Coverage of those races may include some early examples of outboards flipping into boats.

Our Additional Posts on This Topic

We have since written numerous posts on this topic. Many of them can be viewed from Outboard Flipped into Boat.

We also briefly cited some news reports and forums on the spreadsheet. More complete citations are below:

There are additional news reports or forum discussions on several of the accidents listed above. We just cited one for each for brevity (except for the December 2009 accident in which several sources supplies images and descriptions).

We found a historical reference that may lead to identifying some accidents back in the 1950’s:

During our research we identified some “key words” that might be of use to others researching this area: