Estate of David Paul McFarlin and Jamie Laass vs. Brunswick Corporation (Mercury Marine and Lund Company) and Others

CASE UPDATE: This case was settled June 12, 2012. A separate suit was filed May 30, 2012 against the marina (Lakeside Marina in Storm Lake Iowa) that still exists.

Jamie Laass is the boy’s mother, Harry Foote was operating the boat, Redig, Harrington, and Botine are the dredging defendants.

Brunswick (Mercury Marine and Lund) is being sued for negligent design and warnings. The case is in U.S. District Court for the Northern District of Iowa Western Division.

On September 6, 2011, Judge Mark W. Bennett dismissed a motion by the boy’s estranged father to join the plaintiffs.

We recall reading of this accident shortly after it happened. The press tends to cover propeller fatalities involving young children and they almost had a feeding frenzy on this one. I see our database includes 18 separate news reports and two news videos covering the accident.

Two adults, including the boy’s mother, plus three other children were in the boat at the time of accident. Early reports stated signs were posted by the boat ramps telling boaters to go to no-wake speeds near the dredge pipe.

An 11 year old boy was also minorly injured by the propeller.

Six people were in the boat. Alcohol was found not to be a factor in the accident.

The accident happened about 10am. David McFarlin died about an hour later at Storm Lake’s Buena Vista Regional Medical Center.

We cover these in a separate post, Outboard Motor Struck Submerged Object And Flipped Into Boat: Exemplar Outboard Boat Accidents.

During our efforts above to identify other accidents in which an outboard flew into the back of a boat, we came across two other Storm Lake accidents involving the dredge pipe being struck about a year earlier.

Both accidents above are marked as MerCruiser Inboards in BARD. BARD is notorious for confusing true inboards (shaft drives) with inboard-outboards (stern drives). When BARD says inboard and lists a manufacturer that makes both inboards and stern drives, you are left to studying the boat manufacturers lineup and and some other methods we did not pursue at this time. At the time we wrote this, we were not sure which type they were, but suspect they were stern drives due to lake size, location, and populations (lots more stern drives).

We are not sure who is representing Brunswick.

While not common, we have read of several outboards flipping back into the boat when striking underwater debris or obstacles. Several are identified in our post referenced above. In the old days before their modern log test (lead log propelled at a marine drive), Mercury used to have technicians run outboards over logs (originally over telephone poles) to test their ruggedness.

We originally posted a 1950’s Mercury log strike video here and some additional information about log strike tests. That information grew considerably, and has since been moved to other locations:

Meaning, the community is vitally dependent on the Lake. Several years ago they elected to follow the example of some other Iowa communities and dredge their lake. The community decided the county would purchase a dredge and they would do it themselves to maintain the vitality of their lake and their community. An aerial image via Google Earth is shown below. 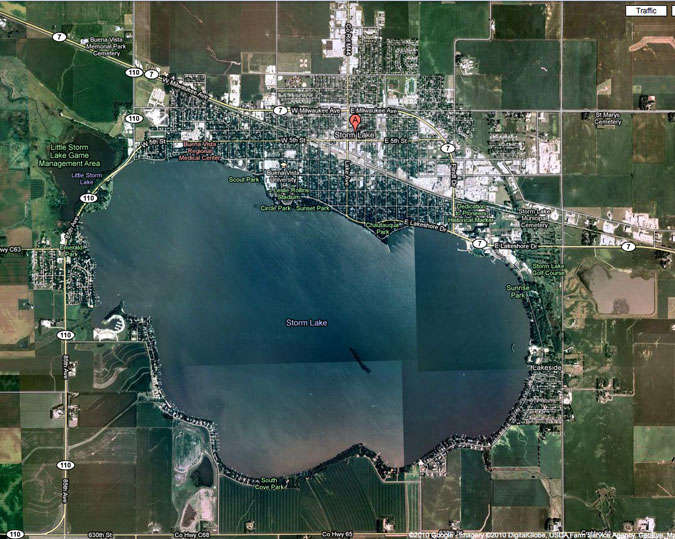 The accident happened as the group left Lakeside Marina (lower right side of the Lake) and came within about 600 yards of the long thin island in the middle of that section of the lake.