Log strike tests have long been used by Mercury to prove their outboards and stern drives could survive the impact of striking submerged logs and other floating or submerged obstacles. In the original log strike tests, Mercury’s test crew used concrete weights to position telephone poles horizontally in open water, then ran boats over them. One of these early tests is documented in a Mercury (then built by Kiekhaefer Corporation) video prepared for Mercury distributors and dealers.

We (PGIC) cover log strike testing because the industry often uses log strike tests to evaluate propeller guards, most notably as a defense against the use of guards in propeller injury legal cases.

This early log strike test video surfaced when we began doing some research surrounding the Estate of David Paul McFarlin and Jamie Laass vs. Brunswick Corporation (Mercury Marine and Lund Company) and Others case in which a family boating outing ran over a dredge pipe, a Mercury Marine outboard flipped back up into the boat, and a young boy was killed by the propeller. As I started searching for more information about log strike tests, I found this old Mercury log strike test video.

It shows the successful 30 miles per hour (mph) log strike test of a Mercury outboard, but “motor E” (obviously an Evinrude) does not fare as well and actually flies into the test boat at about 4:45 to 5:30 on the timer.

In the legal case mentioned above, Mercury claimed this was not their video. That probably means either

(1) They just want to make the plaintiff prove the origin of the video, or

The video above was shot at Mercury’s Siesta Key test site off Sarasota Florida probably in late 1956 or during 1957. Kiekhaefer Corporation had a test site known as Kiekhaefer Mercury Proving Grounds at the south end of Midnight Pass Road on Siesta Key (a long narrow island just barely off the coast of Sarasota Florida). The video may have been shot in conjunction with one of the large gatherings of outdoor writers held there (like the one held in early December 1956 showing off the new Mark 10 or the one held in October 1957 that included log jumping performance tests). Mercury’s more famous Lake X facility opened in 1957 but the terrain there is much different. The full version of the video actually identifies this site as the Sarasota Florida test site.

We were eventually able to obtain a copy of the original video and found the log strike testing segment to be a portion of a 24 minute video titled, Field Testing of the Modern Mercury. The opening of the collection of field test videos says it was created for Mercury distributors and dealers so they could not only tell their customers what a Mercury can do that others cannot, they can also tell them why. The collection is undated, but we suspect it was created between late 1956 and early 1958. A screen shot of the opening is provided above. The title may be a bit hard to read against the white boats on the blue water.

While Brunswick and Mercury Marine may try to sever their historical ties to Mercury outboards produced by Kiekhaefer Corporation in court, they warmly embrace those same ties in promotional literature and in their own history. For example, we present two screen captures we made from the “About Mercury” / “Heritage” section of MercuryMarine.com on April 2, 2012. 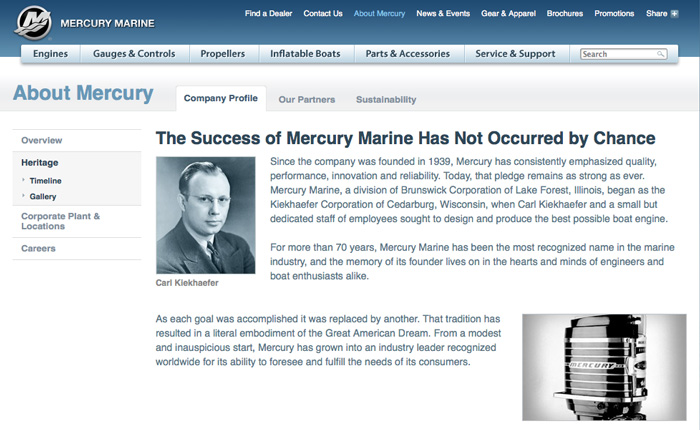 The above image from their site touts them being founded in 1939, prominently portrays Carl Kiekhaefer, and states “For more than 70 years, Mercury Marine has been the most recognized name in the marine industry … “. Mercury did not even go by “Mercury Marine” until Carl Kiekhaefer left in 1969 but they claim the entire Mercury history. 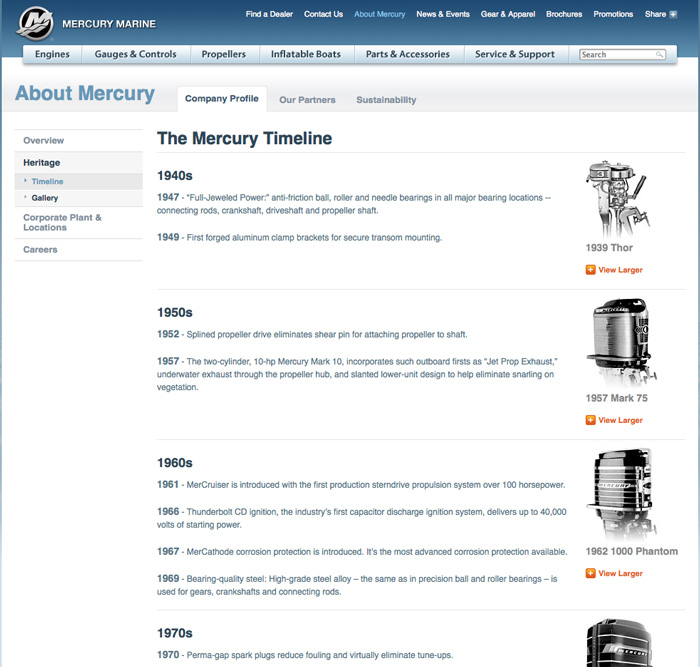 The timeline Mercury Marine currently (2 April 2012) provides on their website opens with an image of Carl Kiekhaefer’s 1939 Thor outboard, then begins describing major innovations by decade. Absolutely no mention is made of the Brunswick acquisition in 1961. Mercury Marine apparently wants to claim all this heritage in the marketplace, then deny it in the courtroom.