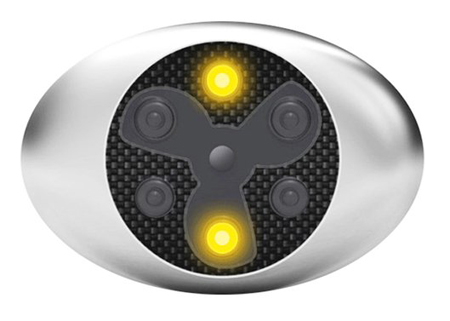 Mercury Marine has since updated their Moving Propeller Alert (MP Alert). MP Alert is now available in a smaller size for mounting where space is limited and for use on non-SmartCraft boats and with non-Mercury outboard motors. The system can run up to four individual rotating lights that can be a mix of the larger and smaller ones if desired.

As to use on non-Mercury systems, as we understand it, a switch in the dash allow the operator to turn the system off and on when swimmers are in the water. The two page flyer does not specifically say the lights automatically rotate when the engine is running and shifted into gear on non-Mercury outboards. They may be asking the operator to switch it on at those times when swimmers are in the water.

The LED lights are automatically dimmed at night so they will not be confused with navigational lights.