Derek Hebert was on a Champion center console boat being operated by Daniel Vamvoras on 7 May 2005. They were between the Calcasieu River and Lake Charles County Club. The steering system failed and the boat began to spin (the Circle of Death). Derek Hebert was ejected, struck 19 times by the propeller, and died from his wounds.

Note – while we call this a Circle of Death accident, we do not know if the operator was ejected, incapacitated, or away from the controls. It really did not matter, because the steering system did not work. The natural tendency of the boat to go into the Circle of Death took over. The operator or someone else on board would have to throttle back or kill the engine, or the boat collide with something to stop its forward progress.

Another boat collided with the Vamvoras boat after Derek Hebert had been ejected.

The U.S. Coast Guard Boating Accident Report Database (BARD) says the vessel Hebert was ejected from was a 1998, 21 foot Champion Bay Champ 21 powered by a 225 horsepower outboard motor with 7 on board. 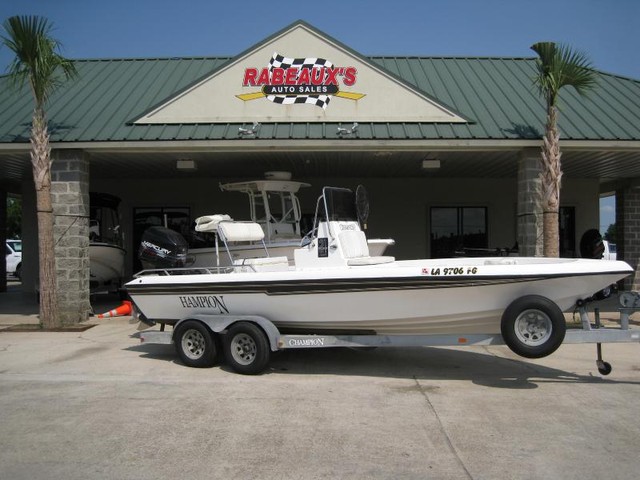 Champion 21 foot bay boat, 1998. This is not the boat in the accident, it is a similar boat once offered for sale by Rabeaux’s Auto Sales

Louisiana Department of Wildlife & Fisheries found the pre-owned boat lost its steering due to a hydraulic leak at a hose/nut or coupling assembly.

It was found the boat’s Teleflex steering system would completely lose steering when only a small amount of hydraulic fluid was lost.

A Wildlife & Fisheries investigator with extensive experience with SeaStar hydraulic power steering systems was surprised to find the loss of 2.7 ounces of hydraulic fluid (about 5 percent of system capacity) could fail the steering system.

Augusto “Kiko” Villalon and Eric Fetchko were hired as experts by Teleflex. They both said the steering system should get “mushy” or “bumpy” before it failed. That would have adequately forewarned the operator of the problem (low hydraulic fluid).

Eric Fetchko did Teleflex no favors when the answered this question:

Q. And you agree that at some point in the operation of a system that has a steering fluid leak, one more drop and you lose total control?
A. Correct.

Investigators found a hose had been replaced with a non-Teleflex hose, and the leak occurred at a junction of that hose.

Mr. Hebert’s survivors / estate sued Teleflex (now SeaStar Solutions) and others claiming Teleflex failed to warn boat owners and passengers of the risk of losing only a small amount of hydraulic fluid. More precisely, Ron Warren, father of Derek Hebert, representing himself individually and the estate of Derek Hebert, filed the suit.

During the trial, evidence was presented that in 1989 Teleflex was aware the loss of a few teaspoons of hydraulic fluid caused complete failure of the steering system. Teleflex said the system would get “mushy” calling attention to the problem before the steering system totally failed.

The case was tried The jury ruled in favor of Teleflex.

A second jury ruled in favor of Mr. Hebert’s survivors. They were awarded $125,000 in compensatory damages and $27 million in punitive damages.

The case was appealed to the Louisiana 3rd Circuit Court of Appeals for several issues including the punitive award possibly being excessive and if interest could be applied to the award if awarded by the jury.

Shelter Mutual Insurance (representing Teleflex) filed for a rehearing by the 3rd Circuit Court of Appeals in Louisiana, but was denied on 3 August 2016.

A close family member of Derek Hebert reported to us in October 2018, “There is no documents to back this story it is a he said story. Although I’ve been denied most reports 911 calls etc.” They went on to say, this young man was “killed in mother’s day weekend only because of the negligence of others. It had nothing to do with a kill spin or a faulty steering.”