Fell Marine will be showing MOB+, their wireless kill switch at the Miami International Boat Show this week per their 8 February 2017 press release. They will be in the Fugawi Software booth and have two center console boats on the water in Mag Bay Yachts slips. 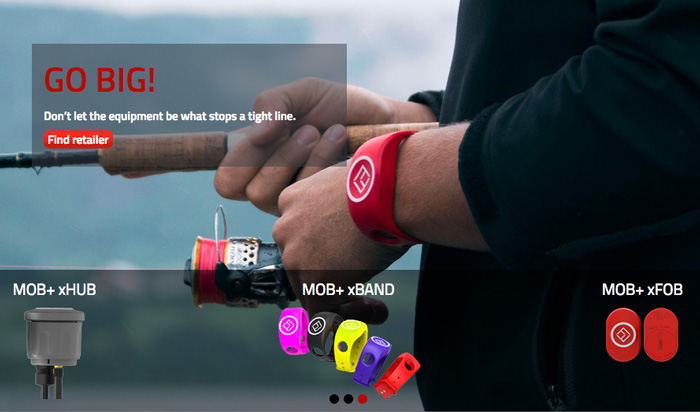 MOB is a popular nautical abbreviation for Man OverBoard.

Fell Marine has partnered with Mag Bay Yachts of Adelanto to install MOB+ on all their future boats.

Fell Marine is a subsidiary of a Norwegian firm, Fell Group AS.

Fell Marine’s MOB+ literature repeatedly touts its electronics do not interfere with existing systems on your boat or other wireless systems.

They say their product brings style, design, and comfort to this market, and their system can be restarted by those remaining on board just 6 seconds after someone has been ejected.

The worn part of the system is available as a Fob that can be worn on a lanyard around your neck or in a wrist band format. You just push a button on the worn component to link up before you start and you are protected.

I notice the title of their press release uses the phrase, “Wireless Kill Switch”, while their web site uses the phrase “Wireless Cut-Off Switch”. The boating industry strongly rejects to any mention of “kill switch”
because they think it makes boating sound unsafe. 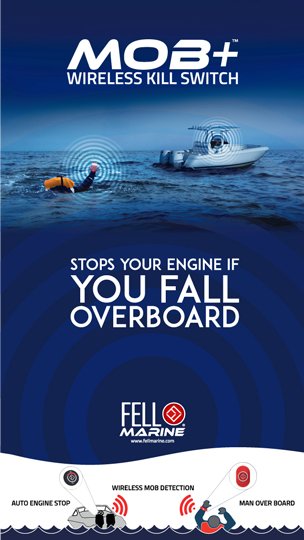 MOB+ had a really nice graphic with their press release. I reduced it in size to the left.

They also have a nice image of a Tracker boat on their web site. That makes us wonder if Bass Pro is selling them. I did not see them on Bass Pro’s site.

MOB+ on a Tracker boat

We note Fell Marine has especially nice graphics on their website and several excellent videos describing installation and use of MOB+.

The quality of their website indicates somebody is putting some money behind this venture.

We hope to visit with Fell Marine after the Miami Boat Show and ask them a few questions specifically about bass boat applications.

Meanwhile, we welcome Fell Marine to the world of Propeller Safety Device manufacturers.