U.S Coast Guard has released a Public Service Announcement (PSA) reenacting the June 1994 accident on Table Rock Lake in Missouri that maimed Phyllis Kopyto and claimed the lives of her husband Bob Kopytko and of their fishing guide, Paul Brundridge. Phyllis speaks over the reenactment video.

The video is very forceful.

Phyllis Kopytko is well known in propeller safety circles as one of the SPIN (Stop Propeller Injuries Now) ladies.

Those of us who are mere mortals cannot envision how hard it would have been for her to be a major participant in the production of this video.

We hope Marion has a good Internet connection on the other side.

We hope the boating industry does not lash out against this video like they did when they successfully banned the Don’t Wreck Your Summer PSA. We suspect they already forced USCG to tame this PSA video down some.

No blood is seen in the water in the Kopytko PSA and nobody is seen impacting the propeller. The PSA only briefly shows three bodies in the water at about 45 seconds into it during the aerial view of the boat circling. But few people will notice the bodies if they only watch the video once. The boat is not shown completing a full circle (the video does not emphasize the boat will continue circling til it runs out of gas), and the actual boat was likely circling in a much tighter circle. However, it’s still a great PSA. 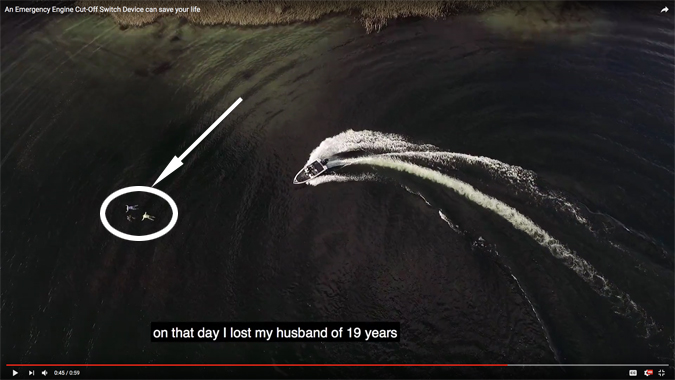 Thanks again to Phyllis, the U.S. Coast Guard, the actors, producers, and all others involved.

Although not currently listed on this version of the video it is our understanding the video is part of the “Get Connected” campaign put together by the National Safe Boating Council. Thanks to them as well.

Thanks to everybody for bringing some great tools to the table to help prevent Circle of Death propeller accidents, and thanks to those who use these materials to help educate boaters about Circle of Death accidents and how to prevent them.