Tyler Wooley’s body was found Friday May 25, 2012 on Kaw Lake near the area he went missing.

Some teenagers on Kaw Lake near Ponca City Oklahoma were involved in a boating accident Saturday afternoon May 19, 2012. Details are still sketchy, but reports indicate 19 year old Tyler Wooley of Enid was tubing at the south end of the lake near McFadden Cove Marina and the dam. The tube turned over, and he is still missing. James Goodman, another 19 year old, jumped in to find him / help him, but was struck in the leg by the boat propeller. James Goodman was lifeflighted / airlifted by EagleMed to Saint Francis Hospital in Tulsa Oklahoma and has since been released.

According to Enid News & Eagle, Tyler Wooley jumped from the boat wearing a child sized life jacket, let go of the jacket, went into distress and began yelling for help. The boat operator moved the boat closer, Goodman jumped in to help, Wooley began to panic and became combative, Goodman attempted to reboard. Goodman’s legs were entrapped by the propeller and killed the engine. The boat operator then jumped in to free Goodman’s legs. Goodman was taken to McFadden Cove by a passing boat.

A relative (in comments below) reports no tubes were involved and Tyler never had a life jacket. We apologize for any errors in our reporting and ask your patience as we are trying to draw a consensus from several news media outlets. Information is often sketchy and subject to change in accidents like this. We plan to be onsite later today (Tuesday). However, we do note that similar comments (falling from a tube, and having a life jacket earlier) have now been attributed to the Kay County Sheriff as late as today (Tuesday) by NewsOK.

Tyler Wooley is thought to have drowned.

Many groups have been involved in the search and rescue and the associated investigation including the Kay County Sheriffs Office, the Oklahoma Highway Patrol (OHP), Ponca City Fire Department, OHP Lake Patrol, and the Army Corps of Engineers.

As of early Monday afternoon, the Oklahoma Highway Patrol was still searching Kaw Lake for Tyler Wooley per the EnidNews.

This accident occurred about an hour north of us and is being heavily covered in the local news media including NewsOn6 (Tulsa), News9 (Oklahoma City), The Enid News & Eagle, Ponca City News, NewsOK, the Tulsa World, and Fox 25 (Oklahoma City). AP News reports are now echoing through many other outlets.

Friends and other online posts have various possible scenarios for the accident that remain to be sorted out.

We were onsite Tuesday afternoon May 22nd and shot several photos. It is a beautiful area and very well kept. I was especially struck by how close the various places I visited and photographed were. The turn off to McFadden Cove is across the street from the USACE office which is just a short walk west of the lookout over the dam. I don’t think it is really a lookout as it says no parking, no trespassing, and a few other warnings. 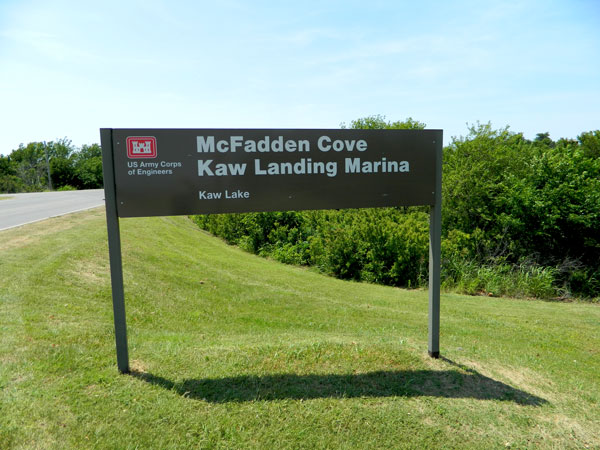 Just as soon as I turned toward the cove, I saw a deer on the right. 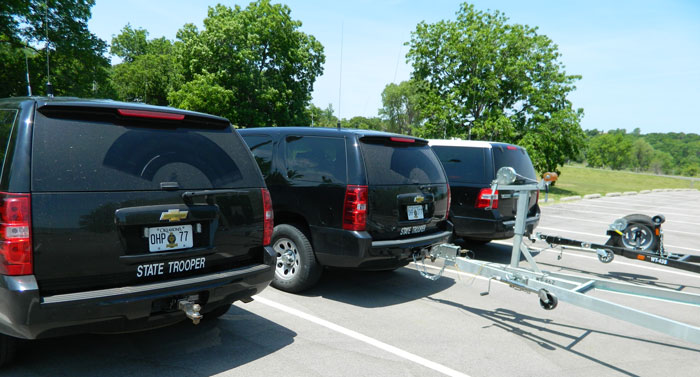 On my walk down to the marina from some restrooms, I encountered these three Oklahoma Highway Patrol (OHP) vehicles pulling two boat trailers in a boat ramp parking lot. I assumed they were with the divers but did not see them on the water during my visit. They may well have been on the water in another area of Kaw Lake.

I had a brief visit with a marina employee and spoke to his dog on the ramp near the marina. The employee was hand loading some sandbags into a front end loader.

This photo of Kaw Lake dam is taken from McFadden Cove Marina. The lookout on the dam is about over the tree in the foreground. 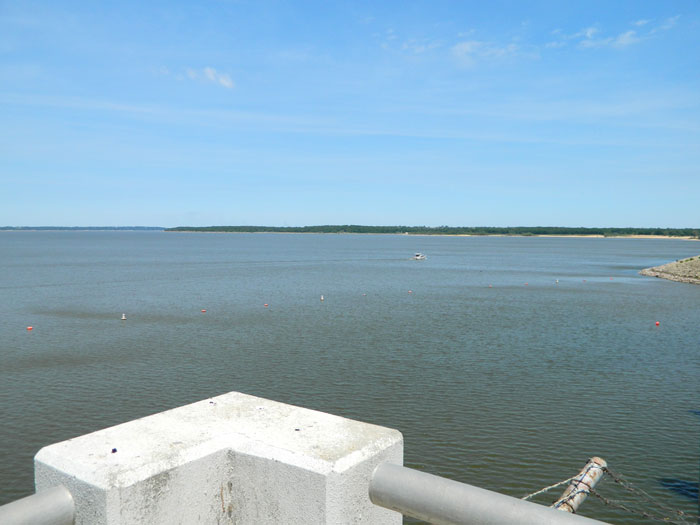 I walked from the marina back to my truck and drove to the USACE lot, then walked east to the lookout on the dam. Along my way I encountered a ground crew getting ready to start mowing and joked with them about it being a never ending task. They offered me a hard hat and weed eater, but I told them I had my own yard to tend. As seen in the photos, the area is very well kept, they are doing a great job. This photo of Kaw Lake was taken from the Kaw Dam lookout (the area over the tree in the previous photo). 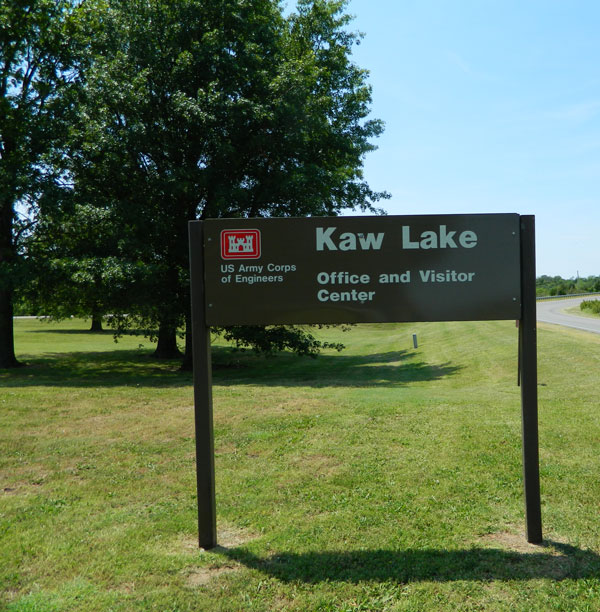 I walked from the lookout back to the U.S. Army Corps of Engineers (USACE) station at Kaw Lake. The signage is nice too. 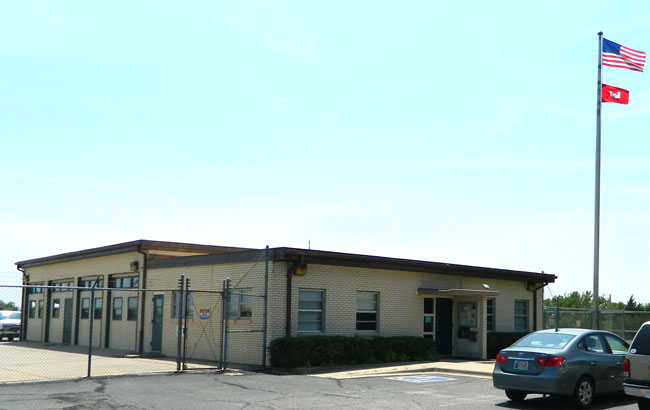 I went in an briefly introduced myself, left a business card, and picked up a nice 48 page color information booklet on Kaw Lake “Nature’s Playground”. 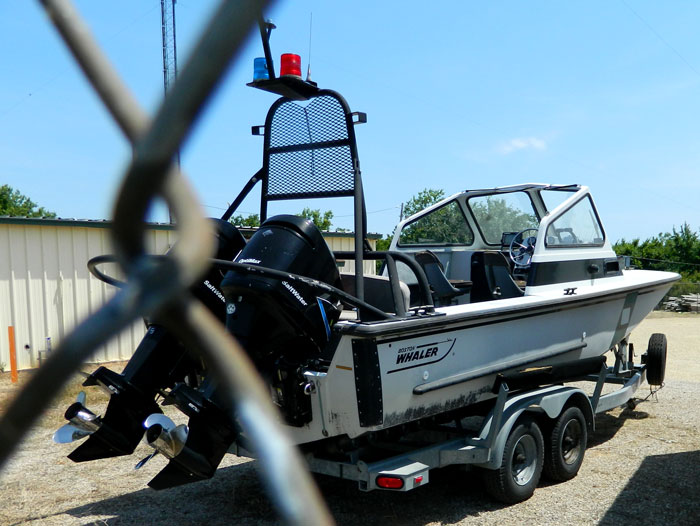 USACE had a nice Boston Whaler with two big twin Mercury Optimax motors on it near some of their storage buildings east of the USACE headquarters at Kaw Lake. I took a photo through the chain link fences.

On Sunday 27 May 2012, the Ponca City News reported the Kay County Sheriff’s Department received a message at 2:04 pm Friday that the body of Tyler Wooley had been found in the area he went missing.

We continue to follow the still evolving coverage of this boating accident involving James Goodman and Tyler Wooley on Kaw Lake near Ponca City Oklahoma.