The US Coast Guard news release quotes USCG’s Phil Cappel as saying, “The report provides the means to evaluate the boat performance characteristics and the level of protection of personnel in the water resulting from the installation of a propeller guard on a particular sterndrive or outboard-powered recreational boat.” 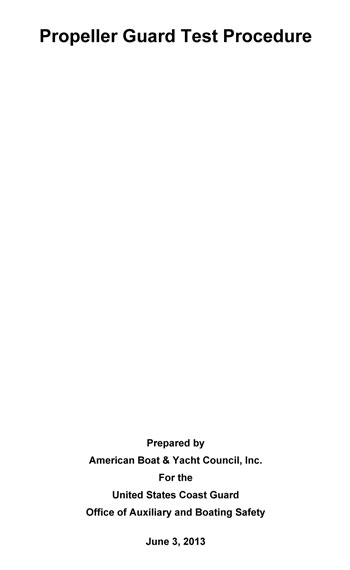 One interesting note, the release says the test equipment required to conduct the testing will be loaned out on a first come, first served basis for the cost of shipping and insurance.

The procedure is scheduled for review in about 3 years, or earlier if necessary.

The actual test procedure is at Propeller Guard Test Protocol.

We have not yet had an opportunity to read the final version.

Its “appearance” is vastly different than a version that was released October 4, 2012 with a request for comment, then killed on October 10, 2012 with this USCG statement in an email to those who had previously reviewed the prop guard test procedure / protocol:

“Following recent briefings and our request for your review of the “Test Protocol for Evaluating Propeller Guarding Methods” the ABYC/CED team received direction from the U.S. Coast Guard to clarify the testing methods. To avoid unproductive use of your valuable time, please disregard our recent request for peer review. We plan to make the requested adjustments and submit a revised draft for peer review in the near future. The peer review request and updated draft will be distributed by email to the same distribution list as the October 4, 2012 request.

We don’t recall receiving a request to review any version of the protocol since October 2012. Now it shows up as a “final version”.

The new (final version) is much briefer (shorter) and looks a little more like a “standard”. For example, it opens by citing many other standards, and the steps and lines are numbered.

The earlier version included several charts of sample outputs (plots of speed vs. RPM, path around the course, etc.). Those are noticeably absent from the final version.

When we get some time we will try to study the Propeller Guard Test Procedure final version more closely and make some more comments at that time.

We would anticipate this document being discussed in propeller accident court cases and exemplary boat prop guards being tested against it.

Our Initial Review of the Propeller Guard Test Procedure

A few days later we posted our initial review / analysis of the Propeller Guard Test Procedure.