Prevent Pontoon Over the Bow Propeller Accidents by DESIGN

This post is a subpart of our larger coverage of Preventing Pontoon Boat Over the Bow accidents.

For brevity, we will solely focus on the bow riding issue in this section.

Design Out The Hazard

Just remove the bow in front of the gate. Some manufacturers already do this on certain models.

in 2012 Ben Hogan, one of the early trial lawyers to represent propeller accident victims wrote a piece titled, An Update on Propeller Injuries. Mr. Hogan ends the article talking about one of his more recent propeller cases in 2010. A ten year old girl was bow riding forward of the safety rails, “an unsafe practice that was invited by design”. She fell overboard and her legs were severely cut by the propeller.

Mr. Hogan showed the same pontoon boat manufacturer offers the an extremely similar model without a platform forward of the rails as seen in his photo below. The case settled. Please note these boats were built back in 1997! 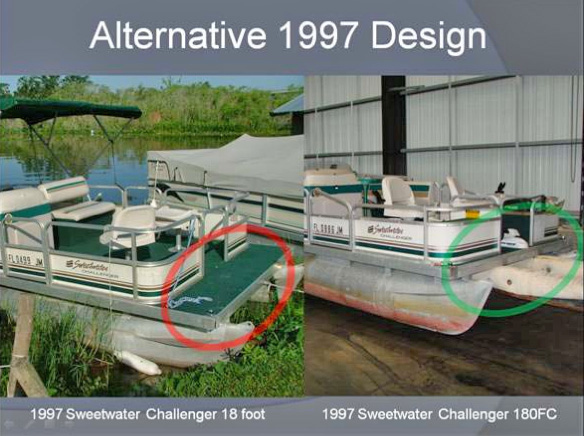 The legal world refers to dangerous areas that attract people, and especially children, an “attractive nuisance”. Examples include:

The rule that a person who owns property on which there is a dangerous thing or condition that will foreseeably lure children to trespass has a duty to protect those children from the danger.

If children are on board under supervision, they are not “trespassing” per the law, but you can easily see the similarities. Children are drawn like a magnet to the bow of a pontoon boat underway. For example, see the tour boat photo below. 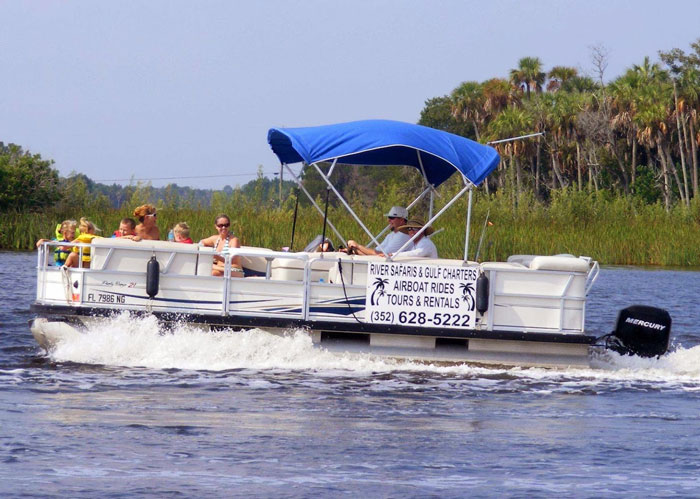 The most obvious way to use guards, shields, and barriers to prevent over the bow boat propeller accidents is to remove the portion of the bow that extends forward of the fence (as show in the Horton photo above) then to install a barrier that prevents children from sticking their legs and feet feet forward, under the front fence (as seen in the Safari boat photo above). Some boats already have barriers such as these.

Use of Guards, Shields, and Barriers 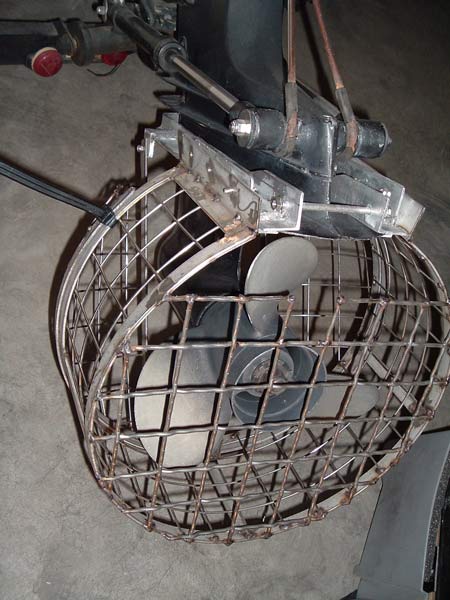 Such guards create minimal drag and handling issues at the slower speeds of many pontoon boats.

With most pontoon boat propeller accidents happening when underway forward, in some instances a propeller guard might be selected that did not provide protection to the rear, such as the Snyder guard designed by Dick Snyder at Mercury Marine. Removing the rear panel improves access to the propeller and significantly decreases drag. This might make guards a more realistic option on pontoon boats capable of higher speeds.

Or for even less drag, one could use the vane type guard Yamaha sold in Europe, made by Propeller Solutions in the U.K. and called the Prop Deflector.

Another use of guards shields and barriers is to increase the height of the front fence. Many people are standing when the boat suddenly slows, strikes a wave or wake, and fall over the fence. Raising the front fence could prevent some of these falls. The front fence could be raised several inches with respect to the side and rear fence which are rarely fallen over.

Yet one more approach is to beef up the existing barriers so they actually function as barriers. American Boat & Yachting (ABYC) standards call for deckrails (fences) and gates to be capable of taking a 400 pound load in any direction at anyplace along their length. Several people have fallen through gates, some even ripped them off their hinges on their way out. While I do not recall anyone falling through the deckrails, with today’s ever growing waistlines and the possibility of people being thrown forward as the boat decelerates, we suggest they consider increasing design loads, especially for the gate.

A subset of the use of guards, shields, and barriers in making hazardous areas so uncomfortable people will not be in them. This can be accomplished many ways, among them are with light, sound, temperature, vibration, smell, shapes, vision (see things that are uncomfortable or not pleasing or just a poor view), or texture (uncomfortable surfaces).

Existing pontoon boats with the bow extending past the fence, or new pontoon boats that needed the bow to extend beyond the fence for some purpose could be designed or retrofitted to make it very uncomfortable to sit there and ESPECIALLY uncomfortable to dangle your legs over the edge. One way is to remove the deck covering in the area in front of the fence. Change the deck floor to expanded metal, perforated metal, or metal safety grating that gets very hot in the sun and is very uncomfortable to sit on. Material selection would need to consider the marine environment, slipping, and corrosion issues.

One possible deck material for pontoon boat bow extensions is Grip Strut safety grating. Commonly used for industrial stair treads, walkways, and catwalks, Grip Strut grating is very uncomfortable to sit on, especially when in swimming or boating attire. It is also very uncomfortable to walk on barefoot (bow riders want to hang their bare feet over the bow). Grip Strut grating is available in a wide range of materials, designs, and sizes from many sources. 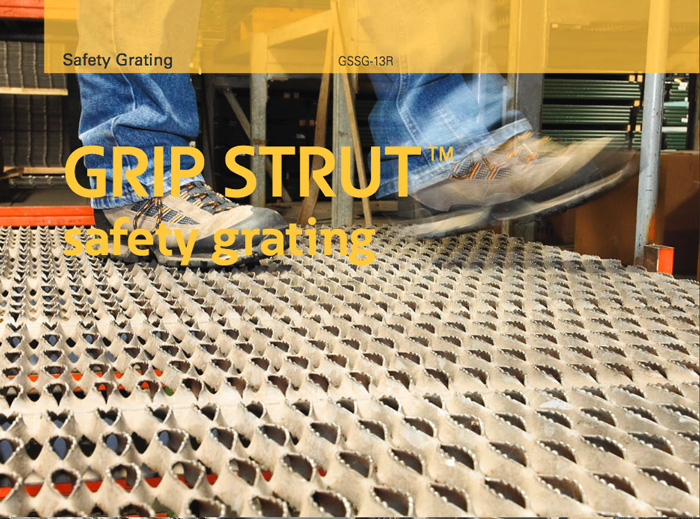 One way to prevent bow riders from dangling their legs over the bow uses a piece of angle iron attached to the leading edge of the front deck with one “leg” of the angle iron sticking straight up, creating a “lip” or “toeboard” around the front deck. Some versions of Grip Strut grating come with a toeboard. Hanging your legs over a toeboard is very uncomfortable. However, some bow riders might try to brace themselves with their back against the front fence and their feet against the toeboard. Designers would need to make that position impossible or very uncomfortable.

There is a whole world of defensive architecture / hostile architecture, also called defensive design / hostile design, emerging in which designers try to prevent the homeless from sitting or laying somewhere. A few examples are shown below. Slate published an article that illustrates many more. There is also a separate worlds of “pest be gone” types that tries to run off birds and small animals. They also have some designs of this nature. A quick search for “homeless spikes” or “defensive architecture” will find many more examples. 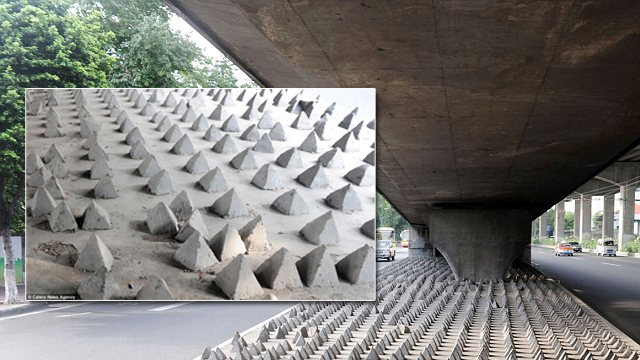 London was among the first to employ the spikes. While homelessness is an entirely separate debate, some techniques used to prevent the homeless from sitting, laying, or taking up residence in certain areas could be applied to the bow area of a pontoon boat in front of the fence.

Some pontoon boats place inward facing couch type seating at the bow as seen in the image below. The couch creates a nice barrier while not feeling like a barrier. 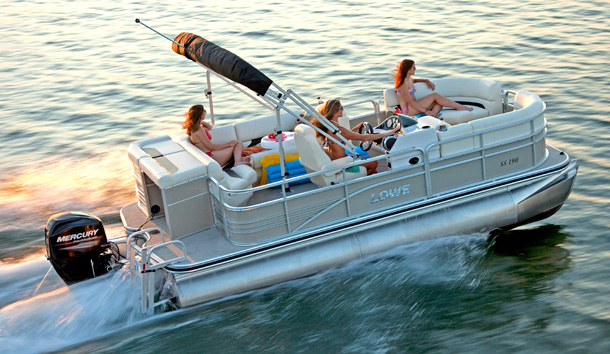 Use of Safety Interlocks

MariTech’s swim gate interlock can be made to sound an alarm, stop the engine when the swim gate is opened, and/or prevent the engine from starting when the gate is open. Similarly, sensors could be used to detect presence of persons in front of the fence when underway.

Most pontoon boats now warn not to ride in front of the fence when underway by the use of warning labels, and in their operators manuals. However, those warnings are not very explicit. Making them more graphical (pictograph of being struck by propeller), and placing some warnings in front of the fence in highly visible locations would increase their reach.

Both warnings above were photographed at the 2014 Tulsa boat show. Neither includes a pictograph, and both fail to meet ANSI Z535.4 standards. One is wrapped around a rail making it hard to view.

Warnings are often relied upon by the industry, but their effectiveness is often questioned by others. Many steps much occur for warnings to be effective. It is even worse when the warning or its presentation is not very good to start with. We encourage the industry to develop pontoon boat bow riding warnings in accordance with ANSI Z535.4 and include pictographs of the propeller strike hazard.

Mandatory boating safety training has long been opposed by the boating industry and is seen as a barrier to potential sales.

Mandatory or voluntary boating safety classes with a significant carrot attached which included specific coverage of pontoon boat bow riding issues could have an impact on accident frequency.

Most boating safety classes are instructional classes taught in a classroom somewhere, they are not taught on the water. On water boating safety classes in which the hazards of bow riding were emphasized and demonstrated would have a much greater impact. A sack of the nature of a 50 pound dog food bag filled with enough macaroni to get its weight up to that of a child could be perched on the front deck of a pontoon boat, the boat rapidly slowed, the bag would roll over the front, and be struck by the propeller. The bag could even have the image of child setting printed on it or glued to it. Different images could be in the front and back to show the front and back of the child. That would make a real impact on parents.

The sack demonstration described above could be filmed and shown in boating safety booths at boat shows.

Public Service Announcements (PSAs) with shock value similar to the Don’t Wreck Your Summer propeller safety PSA could be used to catch the attention of the public and inform them of the hazard.

The frequency at which one of more children can be seen bowriding on pontoon boats indicates many parents have not internalized the hazard of how easy their children can fall from the bow, and how quickly their lives can be changed forever by a propeller strike.

The need to have someone assigned to watch / properly supervise children on board at all times could be stressed in the PSA. The need for bow riding children to wear life jackets so their bodies can be quickly recovered after prop strikes might be pretty shocking for a PSA.

Those renting pontoon boast especially need trained to the importance of keeping children behind the fence when underway.

Several children have been injured or killed while bow riding on rental pontoon boats.

Use of Protective Clothing

While wearing chain mail suits is not practical, the wearing of life jackets makes it easier to quickly recover accident victims who fell over the bow. If they are still alive, medical treatment can begin much faster. If they are not, at least it brings a quicker closure to the family.

While not part of the traditional product safety hierarchy, inventors and entrepreneurs can often bring new ideas to the table, especially when they are stimulated to do so. Many propeller safety devices are the direct result of inventors and entrepreneurs being stimulated by local horrific propeller accidents. They begin thinking about those accidents and ways to prevent them.

We have also long supported the concept of technology prizes. We encourage the industry and other players to consider offering substantial financial prizes to inventors and entrepreneurs that bring new approaches to pontoon boat bow riding issues to the table. The industry just sets up certain criteria and a panel to judge the submissions. This approach often generates many ideas, plus once those ideas are published, they generate even more ideas.

Students considering such projects are drawn into areas of personal interest that are also receiving funding, support, internships, etc. from supporting companies or industries. The boating industry has been noticeably silent on supporting such efforts, and thus students choose projects in other fields.

Plugging this brain drain by supporting one or more projects related to pontoon boat over the bow propeller safety issues could bring some really interesting ideas to the table.

Return to our full coverage of Preventing Over the Bow Pontoon Boat Accidents.