Trevor Bach of the Miami New Times (a paper in Miami FL) authored a major investigative story on the South Florida boat party scene getting out of hand and resulting in several high profile accidents. The last of which, was the quadruple fatality the evening of July 4th off Dinner Key. A 32 foot power boat that had spent the day at the Nixon sandbar party (same site as the recent DJ Laz accident) was headed to Dinner Key in the dark when it struck a 36 foot boat, and bounced into yet another boat. The result was four dead: 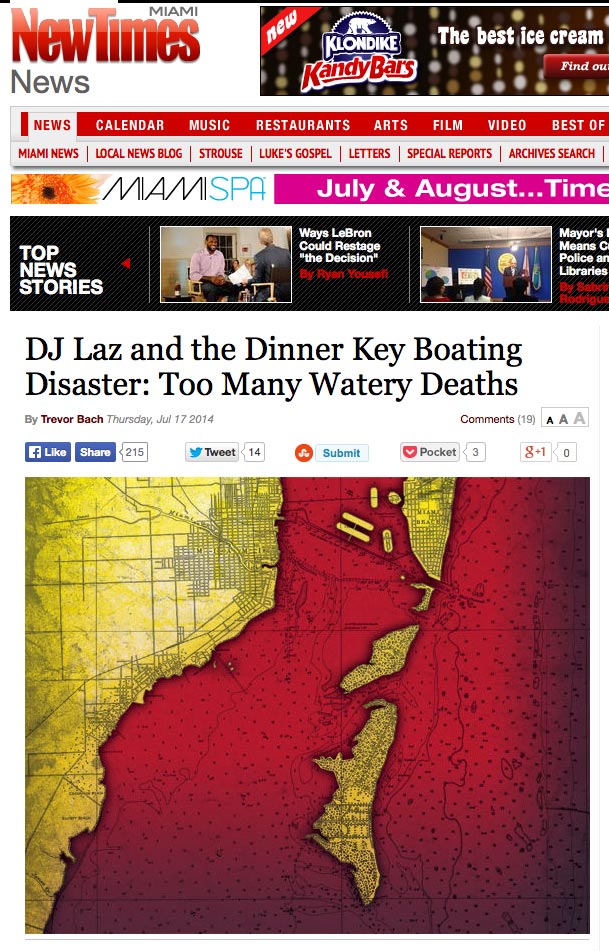 Bach interviews many individuals with ties to boat propeller and boat accident victims including:

Bach goes on to provide statistics, including 62 boating accident deaths in Florida in 2013, and points out the operators of most of those vessels lacked formal boating safety training. There is no minimal age requirement to operate a boat in Florida, and boaters born before 1988 require no formal training to operate most vessels.

Bach notes very few Boating Under the Influence (BUI/DUI) tickets are issued on the water, including none being issued at the DJ Laz party. Officers issued over 40 written warnings and over 20 citations in the area on that date, but nobody was cited for Boating Under the Influence. Bach’s review of recent accidents suggests those involved tend to be 20 to 30 year old males, accidents happen on clear days, most accidents involve only one vessel, and those injured often admit to “careless behavior”.

Bach goes on to point out alcohol has been a major contributor in Florida boating deaths over the past five years.

Interestingly, Bach found an earlier quote by Jack Garcia, killed in the July 4, 2014 accident. Jack appeared in a November 2013 CBS Channel 4 piece discussing the Miami-Dade County fire boats that were being retired due to budget cuts. At that time, Jack Garcia who had been assigned to one of those fire boat crews said:

“When people die on the water, nobody cares or nobody says anything. If somebody out there needs help, they’re not going to get it, and they’re gonna die.”

Just before Bach closes with the quote above, he warns the consequences of inaction against these events getting out of hand “may become apparent in three months, when the Columbus day Regatta, the biggest boat party of the year is scheduled.”

PropellerSafety.com commment – we would especially like to thank Trevor Bach and Miami New Times for covering this issue and for drawing attention to the many propeller accidents that have occurred at these events. We have some understanding of the amount of work and time it takes to research and write an article such as theirs, and greatly appreciate them making the investment to do so. We encourage our viewers to read the full article in the paper. Note the language is a bit edgy as are the parties.