On 9 August 2011, a father (Jared C. Adkins, then 39) and his son (Calvin Adkins, then 11) of Harrington Delaware were on a dive boat charter in the Florida Keys. They were on the Big Dipper, a 46 foot dive boat, belonging to the Florida Keys Dive Center in Tavernier Florida on Plantation Key. 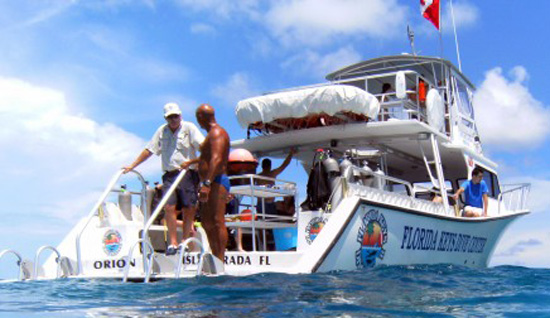 They were on a drift dive north of Conch Reef about 9 miles north of Key Largo, Florida. About 9am, they entered the water form the stern platform of the dive boat. The boat was already in or shortly later put in reverse gear and they were ran over by the propellers. Early reports suggested the divers entered the water before the command from the boat crew. Later reports say they were instructed to dive.

Father and son both received brain damage and skull fractures.

In April 2014 the Adkins family filed a lawsuit against the Dive tour operation, the captain, and the crew.

U.S. District Court for the Southern District of Florida

Hickey Law Firm represented the Adkins in the Federal Case and attributed the accident in part to: the dive master being a substitute, the dive being changed from an anchored dive to a drift dive, the boat design placing life rafts blocking the operator from seeing the dive platform and thus disrupting direct communication from the helm to the dive platform (see photo of the Orion, a sister to the Big Dipper, above). Hickey Law Firm noted similarities in this case to the D.J. Laz accident in a post made to their blog shortly after the DJ Laz accident.

On May 13 2015 during mediation conference, the dive charter firm agreed to pay $11 million to the son and $1 million to the father for a total of $12 million dollars to settle the case. A jury trial was scheduled for mid August 2015.

As part of the $12 million dollar boat propeller accident settlement, the dive firm is to provide the propellers from the Big Dipper dive charter boat to the Jared Adkins.

Ronald Shapiro of Ton Shapiro Mediations of Sunrise Florida was the mediator.