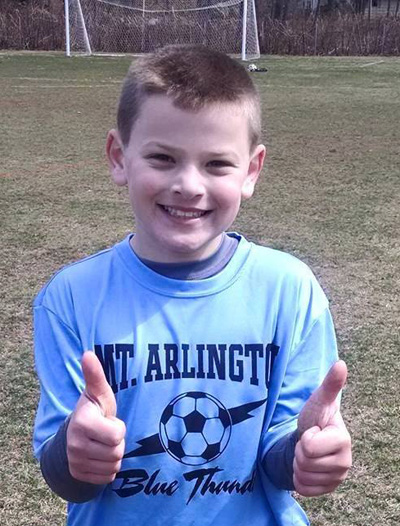 While details are a little sketchy, it looks like young Christopher probably fell from the bow of a rented pontoon boat, as have many children, and was struck in the head by the propeller.

NJ.com had a great story back in October 2015, Christopher’s Law to honor boy, about how the bill would honor the young boy, Christopher D’Amico, whose donated organs saved eight children’s lives.

#KindnessforChristopher was used by those supporting the movement to establish the law.

A Kindness for Christopher facebook page now has over 10,000 followers.

The bill Senate, No. 3233, State of New Jersey, 216th Legislature, is designated as “Christopher’s Law”.

S-3233
The owner of a business that rents pontoon boats to the general public shall prominently display a metallic warning sign measuring at least 24 inches by 24 inches at the entrance of the designated rental area. The top portion of the sign shall state: “All unlicensed pontoon boat operators shall complete a pre-rental instruction course in accordance with New Jersey State Law.” The center portion of the sign shall display an image depicting the outline of a person near a propeller surrounded by a red circle with a red backslash bisecting the image. The bottom portion of the sign shall state: “Warning: Rotating propellers can cause serious injury or death.”

The bill will go in effect the first day of the fourth month following its enactment. We estimate that to be May 1st of June 1st depending on how they officially count months.

Congratulations to Christopher’s family for their efforts to prevent other families from having to endure the same tragedy and sense of loss. Hopefully other states will recognize this as well and require safety training before renting certain types of boats.