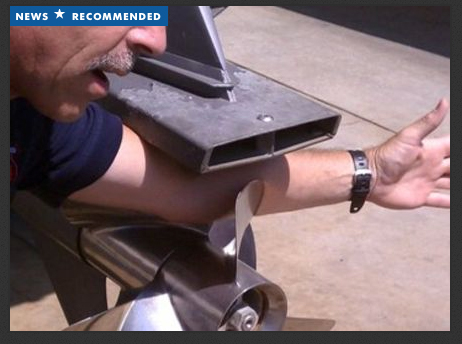 A young girl, by the last name of Angelopoulos, then 12 or 13, was entrapped in Volvo DuoProp stern drive propeller on 30 June 2011 in Chesapeake Bay near Lynnhaven Pier in Virginina Beach. The vessel was a 24 foot 2000 Grady-White Sailfish. The young girl was reboarding the boat after tubing. It took about an hour and a half for rescuers to extricate the girl and the propeller from the boat. We covered the accident back when it happened at Virginia Beach Propeller Accident Impales Girl’s Leg.

The rescue involved a total of 71 people who were recognized in a proclamation.

UPDATE – A settlement has been reached in the case. The Court is scheduled to review and approve it at 2pm 8 February 2016 per the Norfolk Circuit Court’s schedule.

Among issues are if a neutral indicator light on the boat said it was in neutral when it was not.

On 20 August 2014, that suit was moved to U.S. District Court to consider Jones Act and maritime jurisdiction issues (marine companies try to claim they are only liable for the value of the vessel and its contents if the accident occurred in navigable waters).

The Plaintiff moved to remand (send the case back) to the original court. When Volvo Penta saw they were loosing their original claims for being in Federal Court, they tried to stand on the 1971 Boating Safety Act. Volvo Penta said they plaintiff’s complaint implicated that act and thus the case should be tried in Federal Court. The court cited Sprietsma v. Mercury Marine (the famous propeller cased that ended federal preemption) as showing the U.S. Supreme Court showing the Federal Boat and Safety Act of 1971 does not preempt common law claims. In addition the court found Plaintiff’s amended complaint does not implicate the Act.

Per Norfolk Circuit Court records the case began conferencing 5 May 2015.

Its a little late now, but we have about 25 news reports digitally captured at the time of the accident. Those reports include numerous still photos and videos of the rescue in progress. If the case drags on, they might be useful.